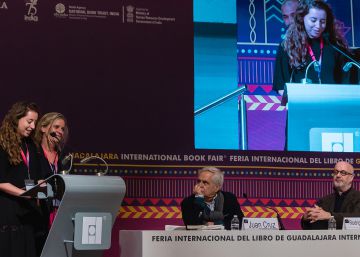 With the death of Claudio López Lamadrid last January, the editor who put Random House Literature (LRH) on the road opened by Seix Barral in the 60s and reopened by Alfaguara in the 90s disappeared: that of Latin America. The possible doubts about the continuity of that seal along that path were dispelled last week at the Guadalajara International Book Fair (Mexico). Hours before the FIL paid tribute in a “stellar” session, his LRH colleagues from Mexico, Argentina, Chile, Colombia, Peru and Spain announced the nth attempt to break the boundaries between the literatures of the countries They speak Spanish to take Ricardo Piglia's reason away when he said that the authors travel more than their books.

Since 2015 that attempt has a name: Language Map. A year of the purchase of Alfaguara by Penguin Random House was completed when Pilar Reyes, responsible for the newly acquired label, and Lamadrid himself presented that initiative in Madrid. It was about choosing titles from those published on the other side of the Atlantic and distributing them in Spanish bookstores sensitive to Latin American letters. This is how the works of Fernanda Melchor arrived on the indolent Peninsula, Julian Herbert, María Moreno, Fogwill or Raul Zurita. Not bad for an editor who announced the idea in this way: “In Spain we publish a lot of Latin American literature but it doesn't interest anything. I tell some authors there to forget about Spain, because it is a wasteland, and that they try first to succeed in the countries next door ”. To be fair, the respective maps had less echo in America than in Spain.

To take the reason for the long-awaited Claudio, his colleagues launched in Guadalajara a map of the global languages, that is, the same for all countries. This is how Pilar Quintana's books will circulate, Nona Fernandez, Rodrigo Hasbún or Agustina Bazterrica. The fact that the circulation moves between 500 and 1,000 copies gives an idea of ​​the hopes placed in the Spanish reader. As Anne Marie Métailié, French editor of Horacio Castellanos Moya, Leonardo Padura or Selva Almada, recalled at the Mexican fair, the boom continues to weigh heavily in Europe. Hence, he defined his work as the perverse exercise of introducing an unknown author to people who do not want to meet him. She is not discouraged because, she said, she has a slogan: "The hardest are the first 20 years."