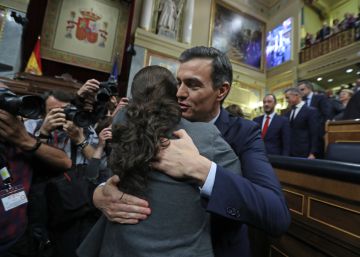 The rich are one of the fiscal objectives of the new Government of the PSOE and Unidos Podemos. With the expected rise in the income tax for those who earn the most, the coalition agreement program contains other measures among which greater control of societies of variable capital investment (sicav), in which a good part of the financial investment of the great Spanish fortunes is concentrated. These pedigree investors, surrounded by tax advisors and lawyers, already work on a plan b that includes transferring money to Luxembourg or merge companies, among other measures.

The latest data from November of last year indicate that these collective savings instruments moved 29.294 million euros. These societies, many of them belonging to the richest families in the country, have always been surrounded by controversy. First, that they pay 1% in corporate tax as well as investment funds, benefiting from the advantages of collective savings. And besides, that many of them can be fraudulently constituted, since at least 100 shareholders are required, but it is common that most of the investment is concentrated in a single person or in a family. To the other filling shareholders, the financial world has baptized them as the Mariachis.

According to the agreement of the new Government, it is intended that the control of the sicavs be passed from the National Securities Market Commission (CNMV) to the Tax Agency and that it be the one that verifies the compliance of the 100 shareholders. Likewise, we want to establish a capital percentage cap that a shareholder or a family group may have, whether they are natural or legal persons. Market sources point out that around 75% of the sicavs have this structure of a large investor surrounded by their straw men.

Paula Mercado, director of Vdos analysis, points out that the most relevant measure of the Government agreement “is to grant the inspection agencies of the Tax Agency the competence to declare for tax purposes only the breach of the requirements for the sicavs, since control over compliance may be more precise than what the CNMV could have exercised so far. ” Something that coincides with Antonio Fernández Vera, president of Renta 4 Gestora, who also points out the fact of establishing additional requirements such as the cap on the percentage of capital of a shareholder to benefit from the 1% rate.

Jacobo Zarco, director of large assets of ATl Capital, explains the incentives that the sicavs have for the big investors: “The great advantage is to defer the payment of taxes, since within the society the taxation for the returns and capital gains that are generated in the management of the portfolio it will be at the reduced rate of 1%, and the shareholder will surface its capital gains when it sells its shares of the sicav, an advantage analogous to that of the investment funds. In an ordinary company they would have to be continuously taxing the general rate of 25% when buying and selling of assets (bonds, stocks, currencies), ”he explains. “The other great benefit is that they get a personalized management of their investments, something that would be more difficult to achieve if they invested that money in a portfolio of investment funds,” adds Zarco.

It does not seem, therefore, a problem of paying more or less taxes, but of being able to defer them at the time that is desired. Ángel Martínez-Aldama, president of Inverco, explains that “the sicavs pay 1% in corporate tax, but additionally their shareholders (natural persons) pay 19%, 21% or 23% in personal income tax, or 25% in corporate tax (if they are legal persons), when they sell their shares, so they not only do not have privileged taxation, but double taxation (1%, plus 19% -21% -23% in personal income tax for natural persons or 25% in companies for legal persons) ”.

Currently there are 2,643 sicavs in Spain with CNMV data until the middle of last year, with 401,323 investors (they touch 151 per sicav). This means 190 companies less than at the end of 2017. In the first six months of 2019, 40 were closed. The fear of a tightening of their current requirements is what drives these abandonments, although their joint assets do not suffer much due to the rise of the assets in which they invest.

“In 2019 the provisional data indicate us net reimbursements of 861 million euros in the sicavs. The growth of equity has been based on the profitability of the portfolios (3,055 million euros), with which the equity increases 2,194 million, 8.04%, ”explains the Vdos expert.

Flight to other latitudes

The fear of the financial industry is that the money from the sicavs escape to other countries with less demands. Martínez-Aldama explains that Portugal together with Spain are the only two countries of the 28 of the EU in which 100 shareholders are required. “A modification of the taxation of the sicavs would imply a relocation of the Spanish asset management industry to Ireland and Luxembourg, in which the corporate tax rate for these vehicles is 0%,” he says.

At the moment, the high patrimony studies with their advisors possible escape routes if the controls harden. Moving the Spanish sicav to Luxembourg could be a solution if there are notable changes. But there are also other alternatives. For Zarco, “changing address is possible but not easy to execute, since it involves high costs and numerous procedures. It would almost be easier to close the Spanish and open a new one, ”he says. But there are other solutions, such as merging with another sicav, which increases the number of shareholders and the share can be diluted if a maximum capital cap is set. In addition, Zarco also sees very interesting investment in unit linked (portfolio of funds under the umbrella of an insurance), which “are usually made with Luxembourg or Irish insurers, where, unlike Spain, the money remains even if the insurer breaks,” he explains. Investment fund portfolios that fit the client’s profile may be another remedy.

It’s easy to know what Alicia Koplowitz or the Del Pino family invest in, among others. These companies are obliged to publish the evolution of their portfolios and this fact becomes an investment guide for many investors, even with effects on the stock exchange, rewarded when they buy and punished when they sell the richest. All sicavs are open to the public, as Antonio Fernández Vera, of Renta 4 indicates: “They trade their shares in the Alternative Stock Market (MAB), which is a public market and accessible to anyone, and therefore they are a product of savings available to any investor, no matter how small your investment. ” But this possibility of investing in sicav of relevant characters, well advised, is not so simple: there are usually no actions for sale.