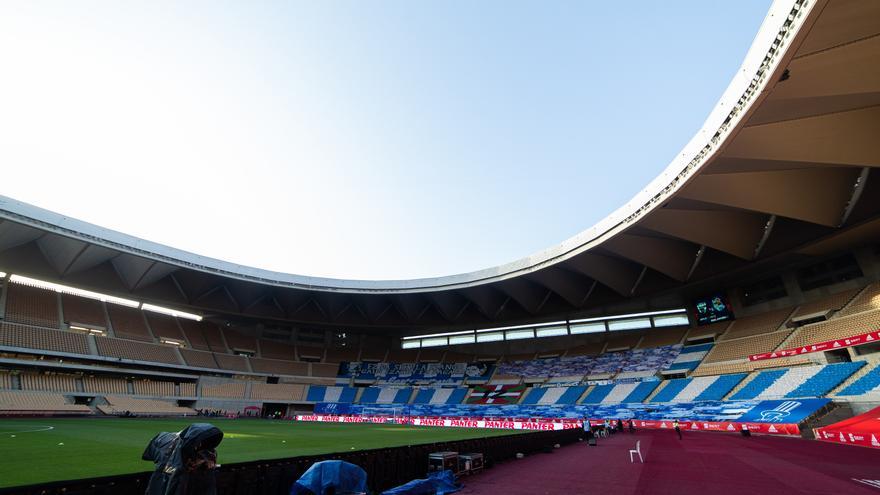 The president of the Royal Spanish Football Federation (RFEF), Luis Rubiales, announced this Friday that the stadium of The Cartuja of Seville would be “the first option” in the event that the UEFA discard Bilbao this Monday as the Spanish headquarters for the next Eurocup from football.

This has been pointed out by the president of the federation in the framework of an informative meeting of Europa Press Andalucía together with the Minister of Education and Sports of the Junta de Andalucía, Javier Imbroda, organized in Seville with the sponsorship of Fundación Cajasol, Atlantic Copper, Cepsa and Laboratorios Vir.

UEFA has given until this Monday, April 19, for Bilbao and three other cities to host the Eurocup to confirm that they meet the conditions to hold matches with the public or if, on the contrary, they do not do so and are relieved by other cities , a decision that you will make that day.

Asked about this question, the president of the RFEF has stressed that, for the national team and “would say” that, for Spain “as a country”, keeping the seat of the European Championship is “fundamental”, so it will do “everything humanly possible” in that direction, to prevent that headquarters from going to another country, and taking into account that “it is true that there are serious difficulties” with the Bilbao option, and in view of this it is UEFA who “has to decide”.

He added that the decision “does not depend” on the Spanish federation, while he has defended that the La Cartuja stadium is “a magnificent place” around which the presiding body has already signed agreements with the Junta de Andalucía, according to has recalled, to confirm that, if Bilbao is ruled out, the stadium in the Andalusian capital “would be the first option” for the RFEF.

In any case, Rubiales has advocated for “caution” and has expressed “respect” for the “magnificent work” that has been carried out in Bilbao, through its mayor, Juan María Aburto, but has reiterated that “the difficulties, as UEFA has already expressed, are many” for it to remain as the venue for the Eurocup, and “if it occurs” that the European body discards it. “For us it would be fatal if this went to another country,” as he has influenced.

Along these lines, the president of the RFEF has asserted that he will “do humanely” everything in his power so that in the Executive Committee “of UEFA next Monday” what is decided does not harm Spain, and that the headquarters remain in Spain, and of course La Cartuja is a magnificent place “.

However, he has remarked that it “does not depend” on him, and has warned that if there is any vote on the matter within said UEFA body, he would surely not vote because this is something that “concerns” his country, if he has well insisted that he is doing “what is humanly possible so that Spain does not lose the three matches of the Spanish team in the group stage ” scheduled in Bilbao and a round of 16 match.

He has underlined what these events entail, not only because of their “economic value, which is tens of millions of euros”, but what it means for the Spanish team “to be able to play in front of our public, our fans.”

Rubiales has pointed out the “negative side” that entails the possibility of Bilbao being left out of the Eurocup, which It “saddens him”, but the situation in the Basque capital “is what it is”. “If UEFA determines that it does not continue, we will do everything possible to ensure that it continues in Spain, and La Cartuja is a magnificent place”, which “has everything to host” those matches, although “when that bridge arrives we will cross it,” according to apostilled before acknowledging that the federation has already established “a relationship with the Junta de Andalucía, with the Ministry of Education and Sports, with the La Cartuja Stadium itself”, so that, if Bilbao is left out, the Seville campus ” it would be the first option. ”

UEFA announced last week that, of the twelve host cities, there were eight that were already confirmed, but that another four were still in the air and could be relieved if they do not meet the imposed conditions; specific, Bilbao, Munich, Rome and Dublin.

“These four cities have until April 19 to provide additional information on their plans and that same day final decisions will be made regarding the organization of the matches in those four venues. At that time, more information will be communicated to holders of tickets to those four venues, “UEFA explained in a statement, after which the Italian capital was ratified.

Also last week, the Bilbao City Council assured that San Mamés will host Eurocup matches with a maximum capacity of 25%, what it supposes about 13,000 viewers. However, the Royal Spanish Football Federation replied that it saw this possibility “unfeasible due to the sanitary conditions established by the Basque Government.”

Bilbao was chosen as one of the venues for Euro 2020, which, due to the Covid-19 pandemic, will be played next June. The matches that San Mamés will host will be those of the national teams of Spain, Sweden, Poland and Slovakia.

Specifically, for Monday, June 14, the match between Spain and Sweden; for Saturday, June 19, the Spain-Poland, and for Wednesday, June 23, the Slovakia-Spain. In the first two cases, at 9:00 p.m., and in the third, at 6:00 p.m., and all this within the framework of the group stage of the European tournament.

The La Cartuja Stadium in Seville was already the subject of a collaboration agreement signed in February 2020 between the president of the Real spanish soccer federation and the Minister of Education and Sports who confirmed it as the venue for the four finals of the Copa del Rey to the Stadium to play since last year.

On April 3, the one corresponding to 2020 was played, between Real Sociedad de San Sebastián and Athletic Club de Bilbao, which he will repeat as a finalist in the one that will take place this Saturday, day 17, on the same stage and that he will face him on this occasion with the Barcelona Soccer Club.

Also, in February of this year, Luis Rubiales and Javier Imbroda they reached another agreement to turn Andalusia into “one of the main scenarios and benchmark” of football for the national teams for the next four years, as was highlighted at the time.

In this way, with the La Cartuja stadium as a background, an agreement was signed that will take Andalusian lands to the men’s senior team, the women’s senior team and the under-21 team in the next sports seasons. Specifically, there will be two matches a year in each of these categories, until reaching 24 encounters.

At the disposal of Sevilla and Betis

On the other hand, the Minister of Education and Sports has underlined in this event the work of his department to “recover” a “five-star” stadium such as La Cartuja, which “lived with its back to the city of Seville and the Andalusians”, despite the fact that “it had cost all Andalusians a real fortune”, and which now wants to make itself available “to the citizens, of society in general, and also of the city’s representative clubs, “Real Betis and Sevilla FC, whose president, José Castro, attended the meeting.

“Your doors are open for whatever you may need”, said Imbroda, who also recalled that both clubs “are part of the board of directors” of the La Cartuja stadium, albeit in a “testimonial way”, and he himself has let its presidents know that this venue “is open, to their disposition for what they need “.