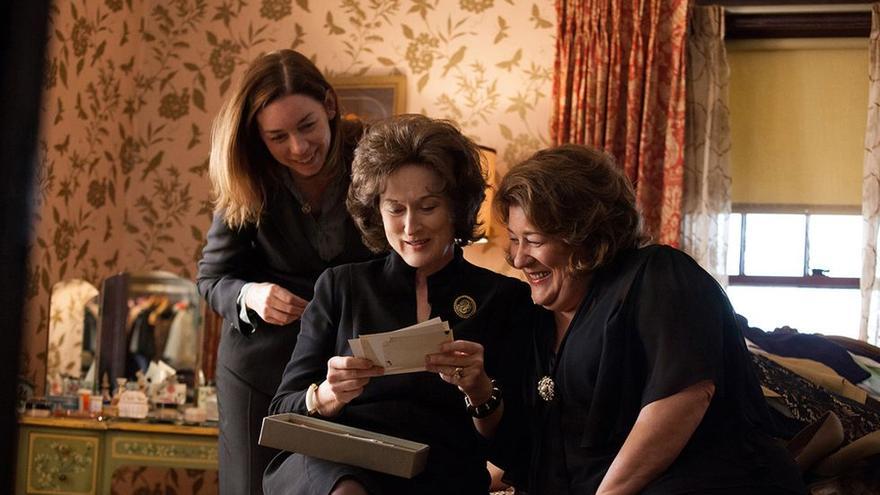 In his book The year of magical thinking, the American writer Joan Didion says that for a time she resisted throwing away her late husband’s shoes in case he needed them when he returned. In Goodbye ghosts, the novel by Nadia Terranova that Libros del Asteroide has just published in Spanish and L’Altra Editorial in Catalan (translated by Celia Filippeto and Judith Jordà respectively), the protagonist, Ida, clings to a box moved by a similar sentiment. But the essential difference between the two is that Didion’s can never come back, but Ida’s you never know. It is highly unlikely, but no evidence ever appeared to make it impossible.

That box is kept in a house in Messina (Italy), which Ida’s mother is thinking of selling. Her grandparents lived in it first, then her parents and her, later she and her mother and last only her mother. Little by little, the apartment was changing and losing tenants of the same lineage until finally it was time to leave. Ida, who lives in Rome, receives a call from her mother to go help her with the boxes and choose what she wants to stay.

Upon returning to that family residence, Ida’s obsession with her father returns – or becomes more present, because she never left – who one day left the front door at 06:16 in the morning and never returned. The person disappeared, but his presence continues to weigh on that house, from which she also fled at the time.

Does the parent try to get rid of this weight of memory by selling the house? Nadia Terranova replies to elDiario.es by email: “I think the mother never really wanted to sell the house, but she felt it was the threat she needed for Ida to return. After all, it is the mother who operates the narrative mechanism. intelligent, with that intelligence composed of the talent and intuition that mothers have. ”

Ida looks for her father in every corner of the city, in every mark on the walls, in every chink of memory. He cannot get rid of it because he cannot find an explanation or a clasp to close that chapter of his biography. In her fantasies, Ida thinks: “Alive or dead, my father returns home, again he has a voice, a body, a name.” A trauma that causes him vivid nightmares with which each chapter of the novel begins.

Terranova studied the subject in order to put herself in the shoes of her character, although she also has experience in this field: “Yes, I studied. I looked at the faces, the lives of those who had lost someone without knowing where they were. But I also looked inside me: my father’s death was taboo for a few years for various reasons. We never went to the cemetery, we didn’t name him. It was as if he was still alive, as if he were somewhere else. ”

The action takes place in Messina, the hometown of the writer, who describes it from a personal perspective, far from any travel guide: “It could not have been objective, why should it? Literature is the realm of subjectivity, from the look, from the point of view that sees and creates things, “he says. In the city that Newfoundland portrays there are clandestine horse races at night, Sicilian cream – “not too sweet, not too liquid, not too artificial” -, there is a cathedral from which Schubert’s Ave Maria is emitted at noon and a ferry that leads to the coast of the Italian peninsula.

A stage with brick walls

Nikos, one of the masons who is fixing the terrace of the apartment, tells Ida that: “Each of us has only one house in life.” For Nadia Terranova: “In the novel there are two meanings of the word house. On the one hand there is real estate and maybe yes, we all have one in life, even though we have lived in many, there is one that stands out when we think about the word in a profound way. On the other hand is our home, where we recompose ourselves. I feel at home, at peace, in cemeteries. In front of my father’s grave I feel at peace, sad but at peace. ”

Using a house as an essential setting in a story is a common resource in literature. In the genre of terror or mystery of course, but also in family sagas. The meeting point where things happen that will later become memories or that serves as the axis for the plot. The characters live there, remember it or miss it. There the answers to the doubts are kept, the keys to the safes of the secrets, the walls that will serve as a refuge are kept. There will be characters who do not want to return, others who spend their lives there and others who find it painful to leave.

In this line are the protagonists of Home by Paco Roca (Astiberri, 2015). A year after the death of the patriarch, the three brothers meet to fix the family’s second residence and put it up for sale. That chalet, which his father built by hand together with the children and his wife, evokes fond memories of all of them, which come to light while they clean, paint and repair. During those days, some entrenched trauma and old grudges also come to light, but above all they come to a necessary conclusion: that had been the true home of their father. And it hurts to say goodbye to the places that were important.

The protagonist of Possessions, the novel by Llucia Ramis published in Libros del Asteroide in 2018 shares that sentiment, when the family decides to sell the grandparents’ house. Can Meixura was for her “the exact place where my memories begin, a lost paradise that I will not be able to return to” and losing it “it hurt as if an arm had been torn off or a loved one had died – in fact, we all died a little, it was like selling off our past– “. However, that real estate transaction is followed by the inheritance of another country house that belonged to his other grandparents, much to the joy of his father. What he did not imagine was what those houses had or were going to affect his family.

All the stories of the Cazalet family, written by Elizabeth Jane Howard (five volumes, all published in Spain by Siruela publishing house. Translations by Celia Montolío and Raquel García Rojas) pass through Home Place at some point. It is the meeting point of the characters and both physical and emotional refuge for all, because despite everything that may happen, it is a happy place. And also a reflection of how the position of this wealthy English family evolves in the society of the first half of the 20th century.

Around this time, although with a much sharper spirit than that of the almost innocent Cazalets, the Radletts – the pseudonym that Nancy Mitford gave her family when portraying her in Hunting for love (Libros del Asteroide, 2017. Translation by Ana Alcaina) – they met at their country house in Alconleigh. “When I was a child I spent Christmas holidays in Alconleigh; it was a constant in my life and although some of them passed without pain or glory, others were marked by violent events and acquired their own character”, explains Fanny, the character in charge of count clan dysfunctions. Later it will be the Hamptons’ mansion where the Mitford / Radlett entanglements will take place in the sequel. Love in cold weather (Libros del Asteroide, 2012. Translation by Miguel Martínez-Lage).

Jonathan Frazen also gave a house of discord to the Lamberts, that clan that stars in his famous novel The corrections (Salamandra, 2012. Translation by Ramón Buenaventura). A three-story house in residential St. Jude that only the mother wants to keep and that, according to her son Gary: “is falling apart and loses value with each passing day.” A trigger for problems and a good example of those characters who are crazy to get rid of the property they hate.

Something similar happens to Marianne, the female protagonist of Sally Rooney’s novel Normal people (Random House Literature, 2019. Translation by Inga Pellisa). Although in this story the houses themselves are not decisive – at least in an obvious way – for the story, they are the setting in which the social class to which each of the protagonists belongs is best reflected. She, who lives in a mansion and he, who lives in a simple proletarian house that he shares with his mother. However, Connell has a home that he can return to while Marianne’s house is a hell that he does not want to step on.

Celia’s house is in Madrid, but the Civil War forces her to move to different cities fleeing from hunger and bombing in the pages of Celia in the revolution (Renaissance, 2016). Her real home is in the Chamartín neighborhood, where she imagines living with her little sisters and her father when it’s all over. “In the hall, which is large and has large armchairs, there is that boat that my parents commissioned when I was little. Upstairs the bedrooms … my little girl’s crib, the little pictures that I painted calcating them with tissue paper from illustrations of a book… Mom’s mahogany closet! “he says as he enters. The family home to which it would be a gift to return, something that does not depend on the will of the character but on the side that wins a war. The cruelest example of all.