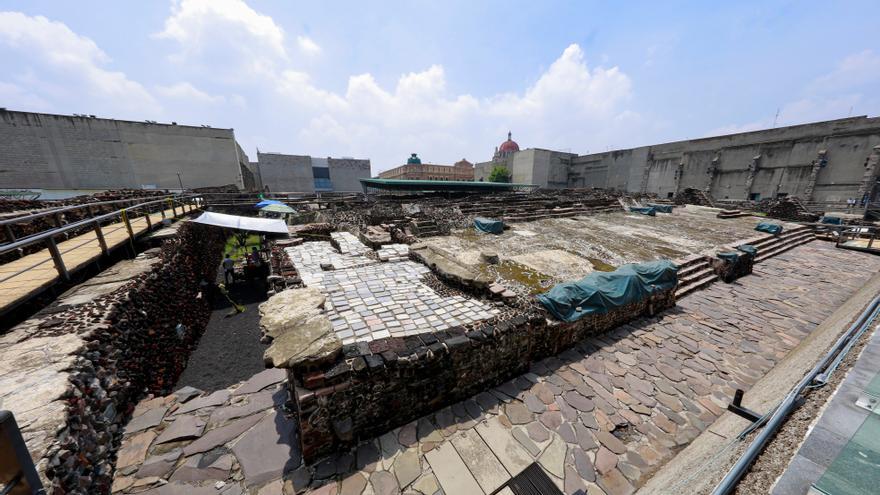 Mexico City, Aug 10 (EFE) .- The Mexican government reported this Tuesday that the restoration work on the Templo Mayor continues three months after the storm that left damage to the main religious center of the ancient Aztec empire, in the current capital. Mexican.

Work at the Eagle Warriors or House of the Eagles Precinct, where a roof collapsed, “has not stopped,” according to a joint statement from the Ministry of Culture and the National Institute of Anthropology and History (INAH).

“It is very important to protect the remains properly before any manipulation to remove the roof that collapsed last April,” explained Mariana Díaz de León, the head of Restoration of the Museo del Templo Mayor (MTM).

A hailstorm caused the collapse of a roof covering the archaeological site on April 28, although without “serious damage.”

The Templo Mayor, built in 1325, was the main religious center of the Mexica during the time of Tenochtitlan.

The repairs will not be ready for the commemoration of this Friday, August 13, when the Government of Mexico will celebrate 500 years of indigenous resistance, as it has renamed the conquest of the Spanish that culminated in the fall of Tenochtitlan.

For now, they are working on the adequate protection of the floors, sidewalks and murals to remove the collapsed 60-ton roof, the Culture report stated.

The Ministry of Culture affirmed that they have worked on the conservation and care of the structures and on the new protection that allows the removal of the roof and protects the vestiges.

“As they are structures with polychromy, it is of utmost importance to know the environmental conditions inside the pre-Hispanic enclosure; therefore, data recording equipment known as Data Logger was placed,” added Díaz de León.

The work team includes the national coordination of Works and Projects, Conservation of Cultural Heritage and Archeology, as well as the Directorate of Site Operations, the Department of Restoration of the MTM and the Geotecnia company (TGC).

Meanwhile, the Government of Mexico City has offered support to reinforce the roof that protects the vestiges of the second stage of the Templo Mayor, dedicated to the gods Tláloc and Huitzilopochtli, and which still preserves remains of mural painting and polychrome sculpture.