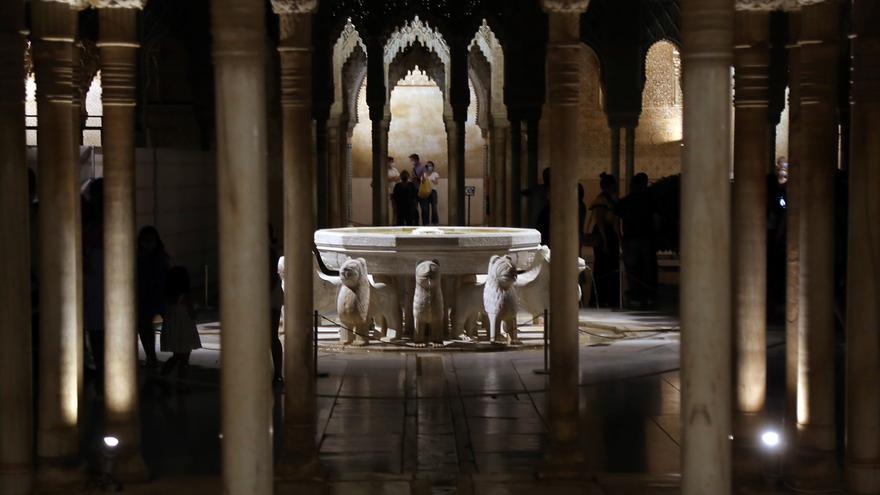 Brussels, Jun 10 (EFE) .- The restoration of the leather paintings in the vaults of the Hall of the Kings of the Palace of the Lions of the Alhambra in Granada, which concluded in August 2018, has been shortlisted for the Special Awards ILUCIDARE, from the European Union Horizon 2020 Research and Innovation Program.

These awards recognize projects that "demonstrate innovation driven by heritage and international relations."

Among those shortlisted for the award, there is also the consortium of museum professionals and academics EU-LAC-Museums, which brings together 35 researchers from Spain, Peru, Chile, Costa Rica, Portugal, France, Scotland and the West Indies.

As the jury declared in a statement, the Alhambra in Granada is "a remarkable heritage that has international importance due to the context of rich intercultural historical exchanges in which it was created."

The judges decided to pre-select the restoration project for the Sala de los Reyes, the great hall and most emblematic space of the Palace of the Lions of the Alhambra, due to the "fruitful international collaboration" that took place in the work between different organizations and companies of Spain, France, Italy and Belgium.

Specifically, the project was directed by the Andalusian Institute of Historical Heritage and the Board of the Alhambra and the Generalife, which financed the works.

Likewise, the National Center for Scientific Research of Paris, the Pablo Olavide University and the University of Seville also participated.

The restorers also exchanged knowledge with European experts from the Italian Institute for Conservation and Research in Rome, the Biological Research Laboratory of the Central Research Institute of Italy and the Royal Institute of Cultural Heritage of Belgium.

THE EU-LAC-MUSEUMS, ANOTHER EXAMPLE OF INTERNATIONAL COLLABORATION

Likewise, the EU-LAC Museums consortium was shortlisted for "the intercultural, intercontinental and international value of the relationships" created within the association.

"Not only do they represent an international collaboration between expert organizations, but the network was building a community with many smaller organizations from various cultural sectors in different parts of the world, creating a common language through the identification of a common goal," he said. the judge.

Since 2014, the EU-LAC-Museums has created new sources of knowledge on museum community development, youth work and digital preservation, to examine and promote the needs of the museum community.

To date, this project has managed to establish exchanges and improve relations between 154 countries, with 108,365 people who have participated in person or online in the project's activities and on its website.

THE REST OF AWARDED

Apart from these two projects, which participate in the category of "Heritage-based international relations", the North Lebanon Project (Italy and Lebanon), the Friends of Bryggen and the Bryggen Foundation (Norway) and the preservation of the Negotinska Krajina wineries (Serbia).

On the other hand, in the category of "Innovation based on heritage", involved the reconstruction of the House of the People in 3D, by the Horta Museum in Brussels; the Basilica of Santa Croce, in Lecce (Italy); the HAP4MARBLE hydroxyapatite marble conservation project (Italy) and the AP Valetta architecture studio (Malta).

The Special Awards, which are awarded within the framework of the European Heritage Awards / Europa Nostra Awards, include the European Commission and the pan-European federation for European heritage, Europa Nostra, and are supported by the Horizon 2020 program.

The winners of both categories will be announced next fall of this year. AND