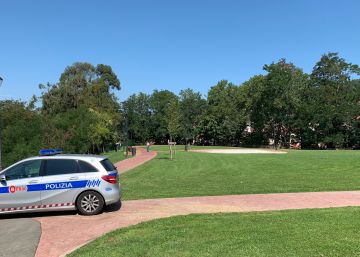 Bilbao neighborhood associations begin to organize against sexual and all kinds of aggressions. Rape in group to a young woman by six individuals between 18 and 36 years old that occurred on Thursday night in the park of Etxebarria will accelerate the creation of new fixed meeting points between the neighbors and the Municipal Police to communicate the things they see and that concern them in their respective neighborhoods.

Several neighbors of the park where the aggression occurred agree that strange movements had been seen there for a month. Just behind there was an area where some slept between cardboard and plastic. The six detainees as alleged perpetrators of the sexual assault have passed this Saturday to court, after spending the night in Ertzaintza units. The arrests occurred because the victim described the tattoo that saw one of them on the neck. This is a criminal with a background that the Municipal Police and Ertzaintza recognized. The search lasted just four hours and both he and his companions were arrested the same early Friday. Of the six detainees, three have a history of assault and robbery.

The president of the Federation of Bilbao Neighborhood Associations, Carlos Ruiz, believes that the information that neighbors can transfer to agents at these meeting points can be vital to prevent other cases of aggression or theft, although he is aware that total security is impossible. "We had been detecting movements in that corner of the park, because right behind there is a hidden area, up to the old wall of the Etxabarri factory, but nobody could imagine this, of course," says Ruiz.

While the neighborhood manager explained on Saturday his demands for coordination to the Bilbao City Council, in the middle of Etxebarria Park, a young man in his 25s was being searched by several agents. He sniffed glue just twenty meters from the place the rape. Behind the benches and the fence, there is a slope protected by trees in which addicts hide to sleep or consume. It is a very crowded area for young people and in no way responds to the parameters of a depressed area.

"They tell us that the attacked girl was in the area of ​​attractions," explains Ruiz, referring to a small park with swings for children in the center of the garden area, when one of the attackers approached him and under threats dragged her to the place where the other five waited. According to sources close to the investigation, she tried to escape running down the stairs that lead to the Plaza del Gas, but they caught her and raped her one after another. At the end, they threw 17 euros and left. She arrived as she could to her home and then to the Basurto Hospital, where doctors called the judge on duty.

The residents of the area are worried and incredulous in the face of such an aggression in a particularly busy area. However, "behind the banks and next to the trees it is very easy to hide the crime," explains Ruiz. He doesn't know anything about whether the victim had stayed with one of the aggressors through social networks, as some means of communication assures. The fact is that Ertzaintza has made public a triptych that will be distributed in all the festivities of the Basque Country during this month of August, in which it recommends women not to be left with strangers through the dating applications. "It is very dangerous" warns the Ertzaintza.

Those arrested, who are of Maghreb origin, according to research sources, have been detained since early Thursday. This Saturday they have been transferred past 10.00 at the disposal of the judge on duty, as reported by the Basque Department of Security. "There are several fronts that we have to improve to make Bilbao safer," explains Ruiz, who considers successful the meeting points already organized in Otxarkoaga, where last year several minors killed two grandparents, and in Zorrotza. "The meeting points are effective, and there are already groups of volunteer neighbors who come to where they are called if necessary," explains Ruiz. But "the Deputation has to be more demanding with unaccompanied minors over which it has jurisdiction and the judges give solutions, since they cannot be putting criminals through one door and taking them out through the other. This is everyone's job," insists. In his opinion we should start with equal education from school and recover the role of the social worker in the street. "The more eyes there are on the street, the better for everyone," he warns.