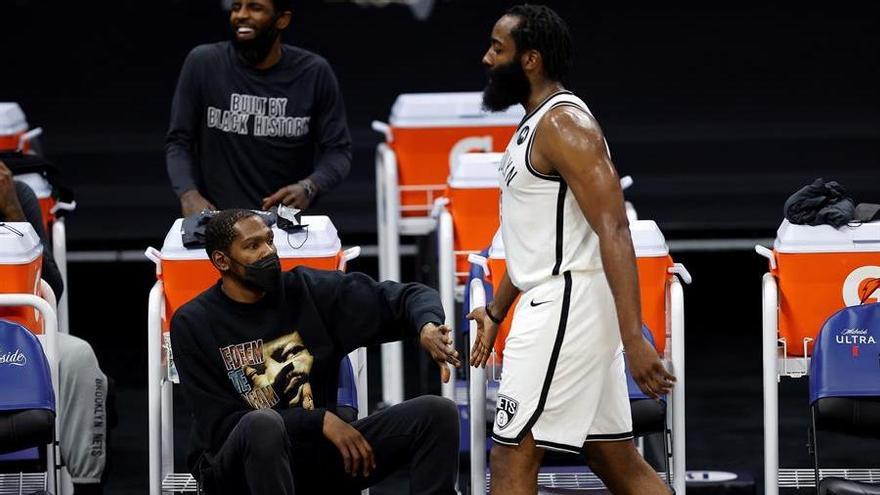 The escort James Harden topped the list of Eastern Conference reserves who were chosen this Tuesday by the coaches of the NBA teams, while the French pivot Rudy gobert and his partner, the escort Donovan Mitchell, made it on the Western Conference roster for the All-Star Party.

Harden, the NBA’s MVP of 2018, represents the Brooklyn Nets for the first time in what will be his ninth consecutive All-Star appearance.

The previous eight came with the Houston Rockets, who traded Harden to Brooklyn as part of a four-way deal last month.

Since the trade, Harden has averaged 24.9 points and 11.4 assists in 18 games for Brooklyn. He will be joined by teammates Kevin Durant, one of the two captains, alongside Los Angeles Lakers star LeBron James and Kyrie Irving, who were named as starters last week.

Besides Harden, the other six teams in the Eastern Conference were: shooting guard Jaylen brown and the power forward Jayson tatum of the Boston Celtics; power forward for the New York Knicks, Julius Randle; the Chicago Bulls shooting guard, Zach LaVine; the Philadelphia 76ers point guard, the Australian Ben simmons; and the center of the Orlando Magic, the Swiss Montenegrin Nikola Vucevic.

Brown will make his first All-Star appearance when he plays the game in Atlanta on March 7, while his teammate Tatum will arrive for the second time in a row. Vucevic will make his second appearance in the All-Star Game. For Simmons it will be his third consecutive call to the All-Star, where he will be able to meet with his teammate the starting center, the Cameroonian Joel Embiid, while Randle, who is having his best year as a professional, arrives for the first time at the All-Star Game, as does LaVine, the Bulls’ leading scorer.

Over the past few weeks, there has been an intense debate about who would deserve the last couple of seats in the East, with a host of candidates gaining support. In the end, however, the league’s coaches ended up leaving several of them out, including: Miami Heat center Bam Adebayo and teammate forward Jimmy Butler. Also not selected was Milwaukee Bucks forward Khris Middleton; the Sixers’ Tobias Harris; guard Fred VanVleet of the Toronto Raptors; Indiana Pacers guard Malcolm Brogdon and teammate Lithuanian power forward Domantas Sabonis; Atlanta Hawks guard Trae Young; and Charlotte Hornets forward Gordon Hayward.

In the west, Gobert and Mitchell were the headliners, as they were the two representatives of the Jazz on a roll, which has the best record in the NBA after winning 20 of 22 games.

Gobert, who is poised to win his third Defensive Player of the Year award, makes his second straight All-Star appearance this season after a couple of no-shows in the previous ones. It is also the second consecutive appearance for Mitchell, who is averaging a career-high 24.5 points and 5.2 assists this season.

They were joined by the base of the Portland Trail Blazers Damian Lillard; Los Angeles Clippers forward Paul George; the pivot of the Lakers, Anthony Davis; the point guard of the Phoenix Suns, Chris paul, and the forward for the New Orleans Pelicans, Zion Williamson.

Lillard could easily have started as he is having another stellar season, averaging 29.8 points and 7.7 assists and keeping Portland in the playoffs image despite guard CJ McCollum and Bosnian center Jusuf Nurkic are out for long-term injuries.

George, meanwhile, is back in the All-Star Game for the seventh time after missing last year’s, his first in Los Angeles, after injuries delayed the start of his season.

Davis, on the other hand, will almost certainly be replaced by someone before the All-Star Game due to the calf strain which currently has the Lakers figure out of the competition.

The last two spots in the West went to one of the league’s oldest stars, Paul, and one of the youngest, Williamson. Paul, whom Phoenix acquired before the season, makes his 11th All-Star appearance and the second in a row after making the roster last year for the Oklahoma City Thunder. Williamson, the No. 1 overall pick in the 2019 NBA draft, makes his first appearance after averaging 25.1 points and having more than 60% shooting from the field.