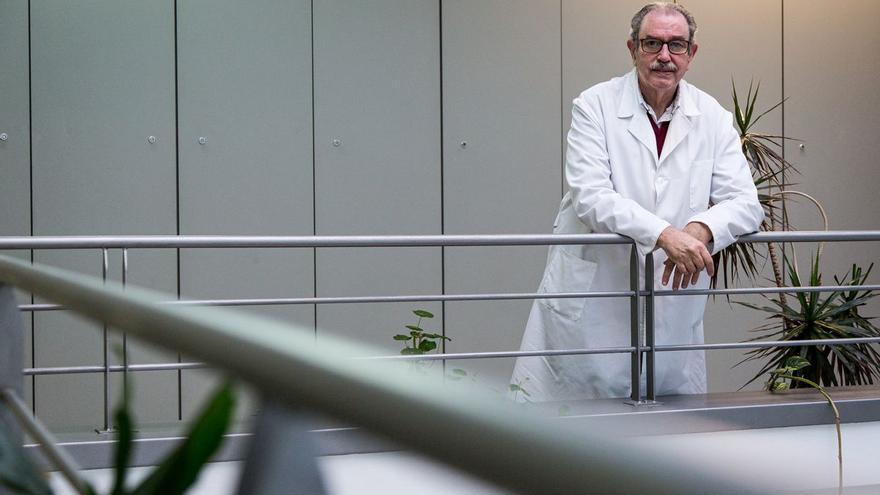 Modern American Pharmaceutical announced this Monday that he works in a single vaccine against him SARS-CoV-2 and the virus flu that could be ready for finals 2023. An advance that analyzes for El Periódico de Españato the teacher Vincent Larraga, responsible for the Laboratory of Molecular Parasitology and Vaccines at the Center for Biological Research-Margarita Salas del Superior Council of Scientific Investigations (CSIC). It makes sense, it can be done and it would be useful, he assures, but it would only be necessary to solve the conservation problems of both vaccines. If we speak of the 'influenza' of the pandemic of Covid-19, the researcher assures: "It will be produced, but not within three months. With a bit of luck it will be next year".

larraga He is also one of the three CSIC researchers -along with Luis Enjuanes Y Mariano Esteban- who work on vaccines against the Spanish invoice coronavirus. His project consists of placing a gene from a SARS-CoV-2 antigen in a synthetic DNA vehicle (a plasmid) that can be introduced into the patient's body and induce protection against infection. There are two advantages of its vaccine candidate: storage at room temperature and that, being a synthetic DNA vaccine, it can be quickly remade to adapt it to virus variants make them more resistant.

What assessment do you make of the announcement made by Moderna about the work on a single vaccine against the flu and Covid-19?

What it is about is preparing a double vaccine. On the one hand, the annual one that they face the flu virus and that of SARS-CoV-2 is going to be added. That is what I have understood reading the statements. But the ad itself suggests much more than it says. These people from Moderna are very smart and, precisely in a context where the pandemic could 'catch up with the flu', they have thought: 'We are going to go ahead and say that we are going to do this.' Who speaks of Moderna (in this case the CEO of the pharmaceutical company, Stephane Bancel) does not speak so much for scientists, but for the markets. They are strategies. They think about how to get the stock to go up.

"It can be done perfectly and, indeed, a double vaccine that protects against the flu and SARS-CoV-2 would be an advantage," says the parasitologist

But does it make sense to work in that direction?

It makes sense, of course. It's sensible and it can be done. Of course. As an idea it is not unreasonable. Which can be useful, too. It can be done perfectly; From a theoretical and conceptual point of view, it is perfectly plausible and, indeed, a double vaccine that protects against the flu and SARS-CoV-2 would be an advantage. But, before 2023, it cannot be done. Because it has a series of drawbacks related to the temperature of both vaccines, which complicates distribution.

How would distribution be complicated?

Every year a seasonal flu vaccine is made using the last strains of the previous year's infection. It is prepared so that, the following year, people who are in risk groups have less chance of getting the infection and that is kept at four degrees. Moderna's SARS-CoV-2 vaccine requires freezing to minus twenty degrees, at least. If you put the two vaccines together, unless the company has a way to do it that requires less freezing, all it does is complicate the distribution of the flu vaccine. It's a technical complication, nothing more than that.

The parasitologist in a photo in the laboratory. ALBA VIGARAY

In any case, is this the first time that there is talk of a joint vaccine for Covid and the flu?

Yes. It is logical. Because it is the first time that, after the appearance of the omicron variant, it is being seen that the mutations are directed towards conversion into a seasonal respiratory infection, which theoretically had to happen. Another thing is that it will arrive quickly. So they (Modern Pharmaceuticals) have taken advantage of it and have said: 'Well, we are going to do a double'. Except that, I insist, they have to solve the issue of conservation.

"It is normal for people to have taken the covid 'flu' with great enthusiasm because they are tired, but that will not happen for at least a year," says the professor

What does Moderna advance now that it is working on a single vaccine have to do, then, with that scenario of 'flu' of covid-19 towards which it seems that we are heading?

From the beginning, all of us experts thought that, if it behaved like other infections, that should happen and it seems that yes, it is indeed behaving as we all expected. The 'flu' is going to occur, but not in three months. With any luck it will be next year. It does seem that this omicron variant is less aggressive in the lung and is transmitted much more quickly, but that does not mean that it is less serious. People are still dying in hospitals. Until it returns to produce another mutation that is more dominant and that is actually milder, it will be months. We must bear in mind that we are having omicron here and in other countries, but there are other places in the world where this variant is not. When this wave ends we will not be in 'flu' or joke, we will still be with an infection that is transmitted much faster and that, as a percentage, sends fewer people to the hospital with respect to those who become infected. But one thing is the percentage and another is the people who continue to enter the ICU and continue to die. It is normal that people have taken the 'flu' thing with great enthusiasm because they are tired.

"You cannot be vaccinated every three months with the same thing because the immune system becomes 'tired' and the response is less", warns the scientist

What do you think about administering a fourth booster dose?

This new variant is less sensitive to the action of specific antibodies. Because it's different. Much more attention has been given to antibodies than to the cellular memory response and that is proving very important now. If a good and long-lasting cellular response is achieved, then people will not have to be vaccinated as many times. You have to think in the medium term. You can't be vaccinating every three months with the same thing because the immune system becomes 'tired' and the response is less. The third dose is still working very well. Produces a 23-fold increase in protection. But, the fourth dose, at least in the case of the Israelis, is not working so well. You can't think: 'I'm starting to vaccinate everyone every three months'; not just for strategic reasons, but scientific ones.

You are one of the three CSIC researchers who are developing projects to achieve a vaccine against covid-19. What phase is yours in?

We are finishing the preclinical phase. We know that we protect "humanized" mice one hundred percent against a lethal dose of the virus.