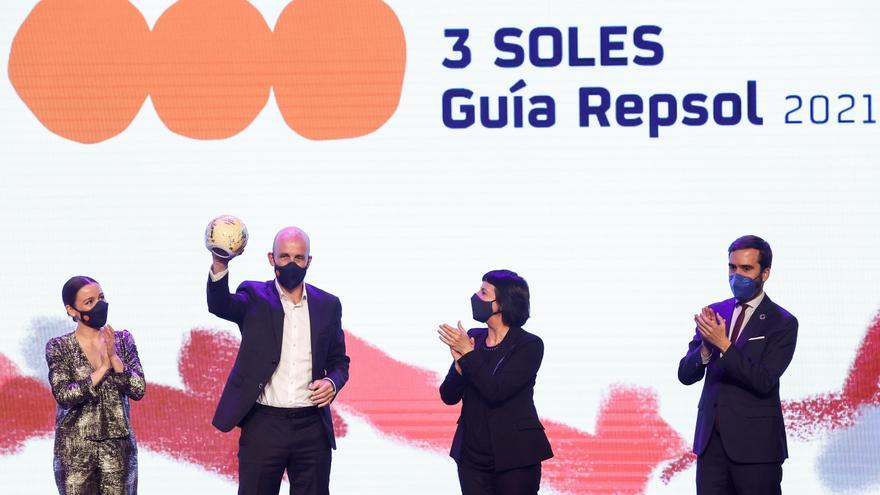 San Sebastián, Apr 13 (EFE) .- From the tears with which Ricardo Temiño (La Fábrica, Burgos) received the news of his first sun to the star who has tattooed Julen Baz (Garena, Vizcaya), the Repsol Guide awards 2021 have been received more than ever as “a hug” in a year in which “the hospitality industry has felt very lonely” and harassed by closures and restrictions.

This has been explained to Efe by some of the chefs from the 96 restaurants who received their first, second or third sun this Monday at a gala in San Sebastián, celebrated with strict anticovid measures but with more emotion as it was the first to bring the union together its hardest year due to the pandemic, and which coincided with the announcement of new restrictions for the sector in different Autonomous Communities.

Elkano (Guetaria, Guipúzcoa), which together with Alkimia and Miramar (Catalonia), achieved its third sun, opened yesterday for the first time after six months for a meal with which the Repsol Guide paid tribute to chefs who wear their highest distinction. But it was a mirage because today they have to re-draw the blind for the new perimeter closure.

Even so, Aitor Arregi understands recognition as “a hug to the house that, when we are all willing to touch and hug each other, goes deeper”.

For David Pérez, who has just renovated Ronquillo (Ramales de la Victoria, Cantabria) and received his first star in this restaurant of family origin, it is “a recognition of the family and suffering, work and effort”. Pérez knows a lot about suffering, who caught the sun while announcing a new closure of the interior of the hotel business in his region.

Neither terrace nor food delivery service has En la Parra (Salamanca), where Rocío Parra (cook) and Alberto Rodríguez (sommelier and head of the room) share a vital project. Parra tells Efe that “achieving a sun is a boost of energy in a very complicated year” that continues, because Salamanca also closes the interior of the restaurants again.

Same city and identical problem for ConSentido. Carlos Hernández was going to open it just when the total confinement was decreed in March 2020, he had to wait until July 13 and in this time he has only been able to open six months. “You are always with uncertainty and I can bear it because I am 30 years old, whoever is 50 …”, he tells Efe after receiving his first sun.

El Molino de Alcuneza turns 25 in Sigüenza (Guadalajara), but it will be a bittersweet celebration, chef Samuel Moreno confesses to Efe with his first sun in his hands. “Awards are always well received, but this year more because we have felt very alone,” he says.

“The management has been catastrophic, the hotel industry has been blamed without causing us, there is no reason to veto us,” he argues.

For Miguel Cobo, the pandemic has stopped his great project in Burgos, Cobo Stratos, with the double concept of Tradition and Evolution, where he was going to explain human evolution through different culinary conservation techniques.

He had to turn to the Tradition side and, although “the people of Burgos have turned over” and have achieved a Repsol sun, they must deal with the extension of the closure of the interior of the restaurants decreed by the Junta de Castilla y León a week ago .

Ricardo Temiño brings another sun to Burgos thanks to La Fábrica and admits that he cried when he found out, “because of what 2020 and 2021 have meant, with the team at ERTE and hard family moments.”

Also as “a boost of spirit in a very complicated year”, Miguel Carretero, from Santerra (Madrid) interprets his first sol, where he has tried to supply the income that he has stopped receiving due to the closure of the bar with home delivery.

“We needed an injection of joy,” says Jordi Esteve, who opens sun in Nectari, Barcelona, ​​where restaurants can only open for food service.

And, he stresses, if the pandemic has swept away elBarri -the group of restaurants founded by Albert Adrià and the Iglesias brothers that includes the award-winning Tickets, Hoja Santa, Pakta and Bodega 1900- “we can have an idea of ​​the magnitude of the tragedy that the hotel industry is experiencing “.