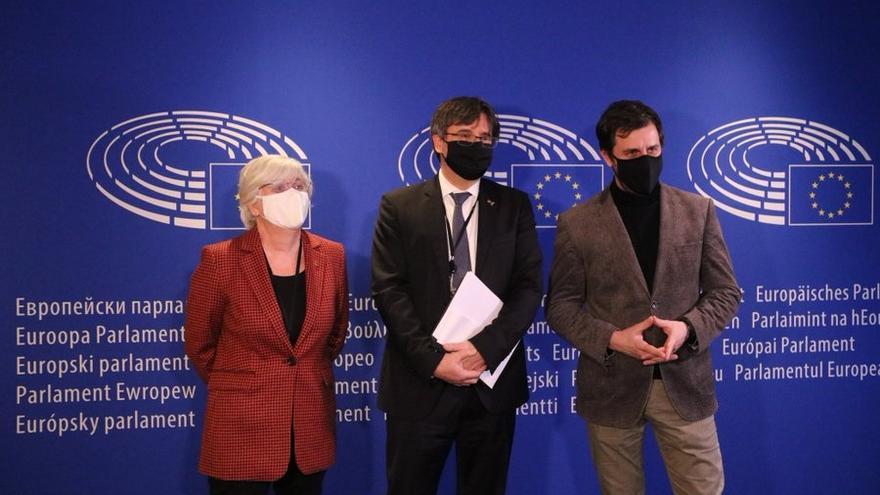 The European Parliament took another step on Tuesday afternoon to lift the immunity of Carles Puigdemont, Toni Comín and Clara Ponsatí. But this uprising is limited to responding to the Supreme Court’s own request, so it does not foresee any prosecution and is limited to the case of the euro order, open and frozen in the Belgian Justice after taking possession of the seat, according to the report prepared by the speaker, the ultra-conservative Bulgarian Angel Dzhambazki (ECR, the Vox group and the Flemish nationalists of the N-VA), and published this Wednesday by the European Parliament.

At the same time, the petition’s report rules out that “the judicial procedure responds to the intention of damaging the political activity of a deputy and the European Parliament”; denies that the cause of 1-O, being from 2017, “began with the intention of hindering the future political activity of Puigdemont as a MEP, since on that date the acquisition of said condition was nothing but a hypothesis for the future”, and also refuses to question the competence of the Supreme Court to request the request, although the Belgian Justice has ruled out the Euroorder of former Minister Lluís Puig precisely by questioning the competence of the Supreme Court.

“It was decided to request the European Parliament to suspend the immunity of Carles Puigdemont i Casamajó ‘so that he can continue the execution of the European arrest and surrender orders that have been issued’, and inform the executing authority in Belgium”. This sentence of the report approved in the Committee on Legal Affairs indicates the scope of application of the lifting of immunity voted in committee and on which the plenary session of the European Parliament will decide from 8 March.

That is to say, the request of the Supreme Court judge Pablo Llarena to the European Parliament, and that the European Parliament is taking, is about the arrest warrant that was left frozen in Belgium when they assumed the act of MEPs, and, on the other hand, it does not specify that it serves to prosecute them, while allowing them to travel to Strasbourg if there are plenary sessions at the French headquarters.

Puigdemont, in this way, recognizes that the “predictable and regrettable” vote in the commission drew a majority of popular, socialists, liberals and ultra-conservatives that, if reproduced in plenary session, would lead to the loss of immunity of the three MEPs and the reactivation of the euro order.

“If that happens,” Comín explained, “we will appeal to the EU court of justice for the irregularities of a process that has led to a black day for European democracy. As we have always done, we will be at the disposal of Belgian justice, but we will appeal to Luxembourg. ”

Puigdemont, Comín and Ponsatí have pointed out the leaks, the fact that the ultra-conservative Bulgarian Angel Dzhambazki (ECR, the Vox group) was a single speaker for the three cases; “The reactions of Citizens after the vote, party of the president of the JURI committee, Adrián Vázquez; or of Vox, colleagues of the rapporteur” to denounce that “it has been a partial process in which the Spanish MEPs have dragged the European Parliament”.

If the European Parliament lifts the immunity, none of the three loses their status as MEP: what happens is that the Euroorder is reactivated and they will be at the expense of what the courts of the country in which they are located decide. In the case of Belgium, the Justice has already rejected that of former Minister Lluís Puig because it considers the Supreme Court not competent.

Esteban González Pons, vice president of the popular Europeans in the European Parliament, has indicated: “The European Parliament cannot become a refuge of impunity for those who attack the rule of law in an EU member country, thus damaging the stability of the whole of the Union”.

Iban García del Blanco, Socialist MEP and Vice President of JURI, said after the vote: “From now on, it is the plenary session of the European Parliament that has to make a definitive decision, which is supported in principle by a more than sufficient majority The two Spanish socialists who belong to that commission have, of course, voted in favor of lifting immunity. We believe that the institutions have to function normally. We have not decided on the substance of the matter. The Legal Affairs Commission is not a court and it will be before the Spanish justice before which they will have to respond like the rest of the citizens of Spain “.

The president of the Legal Affairs committee, Adrián Vázquez (Citizens / Renew), declared after the vote on the report: “We have to wait. The procedure has not yet been completed. Once the plenary votes in favor of ratifying the report of the Commission, the lifting of immunity is automatic. The deputies do not lose their status as MEP, if it is ratified in plenary session, notification is given to the Member State that the deputies can be either investigated or brought to trial “.

The co-president of The Left in the European Parliament (GUE / NGL), Manon Aubry (France Insoumise), has criticized the decision of the Legal Affairs committee, to which she belongs: “The proposal to lift the immunity of three Catalan deputies is a serious precedent: the European Parliament proposes to hand over its deputies to the political persecution of a Member State. This is not a sovereign Parliament that guarantees the rule of law, but a democratic parody “.