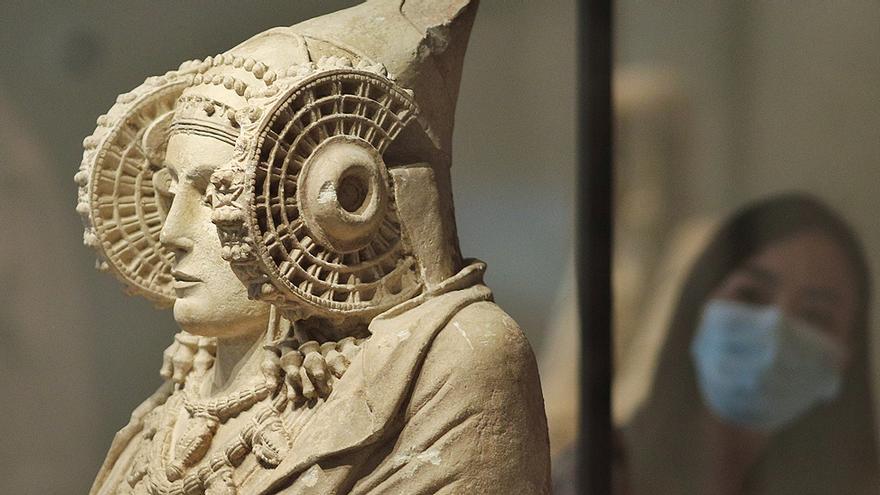 The General Directorate of Fine Arts has not performed any new analysis of the Lady of Elche to reach the conclusion that its assignment is unfeasible, as requested by the plenary session of the Alicante city. The circular that two weeks ago received the City Hall in which it was questioned the "state of health" of the bust, thus advising against the loan, is based on an exhaustive report from the Institute of Historical Heritage of Spain (IPHE) dated 2006. It so happens that it was precisely that body and in that year the that opened the doors for the archaeological piece to return to Elche and it did not do so for free but to request of the Board of Trustees of the National Archaeological Museum, which had received a transfer request from the plenary session of Elche and needed the opinion of experts. Based on it, on January 19 of that year the loan was authorized that brought the piece to Elche four months later, on May 18, and until November 1.

Can a report from 16 years ago say white then and black now? No, but depending on who interprets it, the conclusions can be diametrically opposed. The newspaper El País published in its digital edition yesterday that the only bust analysis and that has served as the basis for denying his loan now, was carried out with the result of the extraction between 2000 and 2005 of ten microscopic samples of stones, crusts and superficial deposits from the bust by, precisely, the IPHE, and that is what has decided to Fine Arts to deny the loan now, although it was feasible then for the institute.

The archaeologists of the National Archaeological Museum (MAN) Magdalena Barril, Eduardo Galán and Salvador Rovira, in an interesting article "The loan of the Lady of Elche. Management, conditions and dissemination" in which they recall that meeting on January 19, 2006 where the report was put on the table, they say: "...Once the data was collected and processed with the aforementioned techniques, both teams issued a preliminary report, in light of which the permanent commission of the Museum's Board of Trustees decided that the loan would be possible as long as the full Board of Trustees approved it and under strict conditionss". One of these teams was the IPHE, which was based on X-ray fluorescence spectrometry, stereoscopic microscopy, radiography, scintigraphy, photography and macrophotography, counting on the means of the Faculty of Physics of the Complutense University; the second team was led by Brigitte Bourgeois, from the Center de Recherche et de Restauration des Musees de France. That day everyone agreed, after that analysis, that the Lady would return to Elche for almost six months.

And the state of the bust and how it was then was already assessed to give its approval, why now with the same document is it not right? The newspaper has tried, in messages and calls to the Ministry of Culture and for two weeks, to obtain what everyone, starting with the mayor himself, Carlos González, I thought it was a new analytical report about the Lady and that his conclusions were those that had served the General Director of Fine Arts to deny the loan, without even the MAN Board of Trustees having met, as was done then, to open a file and analyze its feasibility. Now, directly, with the same report and from the same institute that served to bring him here in 2006, he refuses. Perhaps that is why the Elche City Council has been waiting for it to be sent for two weeks because, really, there is nothing new that was not said 16 years ago. Does not exist.

In fact, this week the alderman has celebrated that on Tuesday, February 15 the general director of Fine Arts receives him to talk about the subject. On Tuesday, surprisingly, the Ministry of Culture assured in a statement that a new report on the Lady would be made, along with two other high-value Iberian pieces.