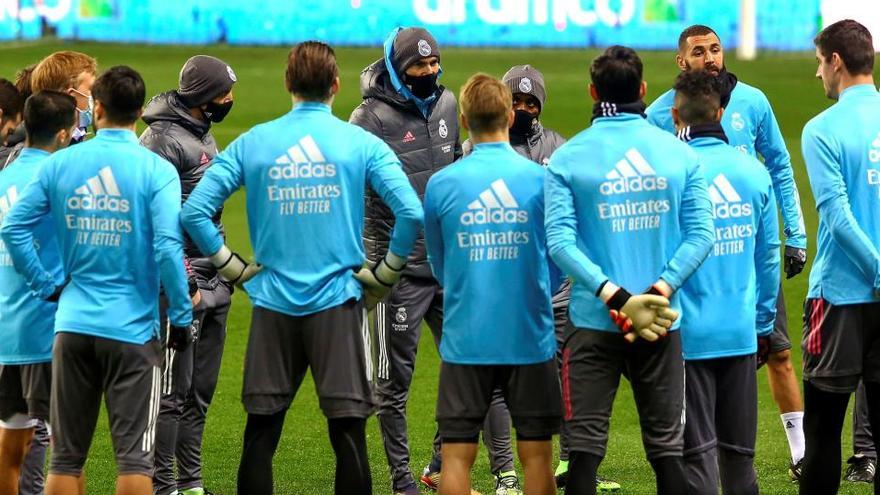 The second semifinal of the Spanish Super Cup measure to a Real Madrid in need of titles, with Zinedine Zidane once again forced to straighten his team’s course with a conquest, against the Athletic Club renewedor in illusions with the arrival to his bench of Marcelino García Toral, who faces a major challenge.

Marcelino will seek to match the inequality of templates on the board. An expert in tactics, a meticulous student of rivals, with a clear analysis of the defects of Real Madrid against teams that await him on their land with united lines. Zidane is obliged to find solutions and they are not expected in the variation of an eleven type. Real Madrid changes should be oriented towards their interpretation of the game, the sense of their possession with the search for danger on the wings and special attention to the withdrawal after loss.

Real Madrid defends title that, a year ago, found in Jeddah the first step of the reconstruction carried out by Zidane after his return. The white resurrection, which would later conquer LaLiga Santander, came eliminating Valencia in the semifinals and winning the final against Atlético de Madrid on penalties. The eleventh Spanish Super Cup, two behind Barcelona, ​​with whom they want to further reduce the difference in this edition.

A year ago he arrived at the appointment conditioned by the loss of two of his great stars, Eden Hazard and Karim Benzema. The two will be assuming responsibilities against Athletic. The Belgian before an opportunity to finally be decisive in a tournament after his ordeal of injuries as a Madrid player; the French feeling the team’s need for his goals and his best football. Three consecutive games without scoring or assisting; two draws yielded against minor rivals such as Elche and Osasuna that complicate league aspirations.

Despite the bad dynamics, no changes are expected from Zidane in his starting team. The absence of Dani Carvajal on the right side is the only one of the gala eleven and everything indicates that he will continue to bet on delaying the position of Lucas Vázquez, giving continuity to Marco Asensio ahead. Waiting for more minutes is the Uruguayan Fede Valverde, with a clear drop in prominence compared to last year, when he was decisive in the conquest with a kick to Álvaro Morata in extra time, who faced only Courtois, in what ended up being a blessed expulsion.

Two Madrid legends such as Sergio Ramos and Brazilian Marcelo face the opportunity to match the most successful footballer in Real Madrid history, Paco Gento, to a title of 23 from the ceiling marked 50 years ago.

Athletic faces the Super Cup, the fifth it disputes and in which it seeks its third title, as Marcelino’s first great challenge. The coach arrived just ten days ago to replace Gaizka Garitano and has only directed one game. It was the defeat in San Mamés against a Barcelona that traced the brilliant start of Bilbao and the 1-0 that Iñaki Williams put on the scoreboard with a stellar performance by Lionel Messi.

That start of the game a week ago is what Marcelino wants as a hallmark of his team, which he asks for order without the ball and verticality with the ball within his usual game system 1-4-4-2. For this, he has had more preparation time than expected, since Saturday’s league clash against Atlético de Madrid at the Wanda Metropolitano had to be suspended due to the effects of the storm Filomena.

The Asturian coach suffers a draft loss for the tournament, that of Yuri berchiche, one of its capital players, who was injured against Barça. He was the hero of the last Copa del Rey, which gave him the ticket not only to the final against Real Sociedad that is still to be played, but also for this Super Cup that starts against Real Madrid. By cons, Marcelino can count on Yeray Álvarez, a key piece in the center of the defense, whose claw and power his team has missed in the three games that he has not been available.

The return of Yeray is presumed as the main novelty in an eleven in which the regulars are expected, although with the unknown of the conclusions that Villaviciosa drew from 2-3 against Barcelona much clearer on the field of play than in a marker that made up a good goal from Iker Muniain at the end.

The position of captain, who played heeled to the left, and that of Raúl García, Williams’ companion in attack, are the main doubts facing a rojiblanca line-up in which Dani García could perhaps enter in the center of the field to help the young Unai Vencedor, Mikel Vesga or both.

In the recent visit to Valdebebas, less than a month ago, Garitano did well with the Dani-Vencedor couple and that Vesga came in at game time. He was the one who had the opportunity in the discount to equalize the 1-2 with which regulation time was reached and that Karim Benzema extended to the final 3-1 against the back. The right wing Ander Capa-Óscar de Marcos also performed well, where he reached 1-1, and, despite his many errors this season, Nobody expects Unai Simón not to start under the sticks.