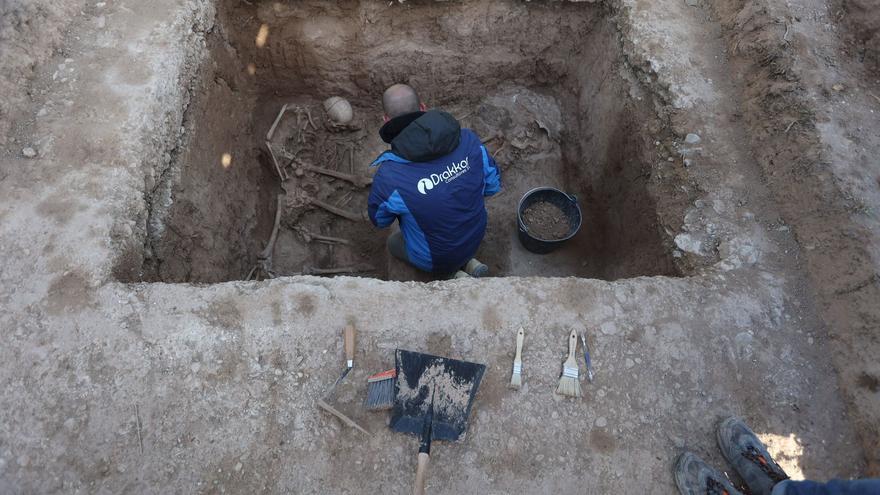 Others five victims of Francoist repression have appeared during works of exhumation on the pit 33 of Municipal Cemetery of Alicante in an archaeological excavation that has the economical support of the Department of Democratic Quality. The Minister of Participation, Transparency, Cooperation and Democratic Quality, Rosa Perez Garijo, accompanied by the regional secretary for Democratic Quality, Toñi Serna, has made a visit to the graveyard to verify this last intervention in situ. Jorga García, from Drakkar Consultores, the firm that carries out the search and extraction, has pointed out that the first skeletons found are complete and intact, and that they hope to find 18, including a woman. The first that have appeared are the last to be shot, on February 12, 1942, and they are without a box; and it is hoped that the rest will be below, buried in boxes. The first to be retaliated against date back to December 1941.

This grave is the fourth in the cemetery in which victims of Franco's repression are being sought since Excavations began at number 10, in February of last year, in which few remains were found and without connection. In December the first remains appeared as part of the search in the grave 20, where intact bodies were found, and in the 36, although in this one they were removed. Subsequently, however, it has been verified that there are vestiges of the 22 victims who are presumed buried there.

Pérez Garijo has been optimistic about these first results "that will allow us to continue exhuming to return the remains of their loved ones to the families of the victims, that so many years of suffering have been waiting for". "It is a very emotional moment - the councilor assured - despite having that feeling sad for being a little late to the fight that the children of the victims began years ago and that their grandchildren later continued".

For the Minister of Democratic Quality "repairing the memory of the victims and opening all the graves in our territory is a matter of justice" because, "It is not understood that in a democracy we have ditches and cemeteries full of mass graves".

The works in the pit 33, which began this January at the Alicante Cemetery, will continue through the month of February in order to recover the remains of 18 people who were killed between December 17, 1941 and February 12, 1942, of the Alicante towns of Novelda, Elx, Benejúzar, Almoradí, Banyeres, Callosa de Segura, Elda, Torrevieja, Onil, Monforte del Cid, Rojales, Cocentaina and Monóver. The initial tasks have made it possible to locate the first remains of five victims without coffin in anatomical connection at a depth of about 80 centimeters, two of them complete. The other three bodies also appear to be complete, but cleaning tasks are being carried out to confirm this.

Everything seems to indicate, according to the Consell, that the bodies seem thrown into the pit and not placed, which will be confirmed once they are exhumed and proceed to the taking DNA samples in the laboratory. According to the chronology of executions, these bodies would belong to the last five executed. In this sense, In the cemetery records there is no record of other burials in the grave other than those of victims of the Francoist repression, so everything suggests that it is the executed that are being sought in this case. The exhumation work of grave 33 is promoted by the Association of Relatives of the Victims of the Francoism of the Alicante Cemetery, which prompts the next opening of pit 14, and have a sSubsidy from the Department of Democratic Quality of 72,570 euros. In the province of Alicante around 400 people from different towns in Alicante and also from other Spanish municipalities disappeared victims of the Francoist repression through numerous executions after a summary trial and sentence of death.