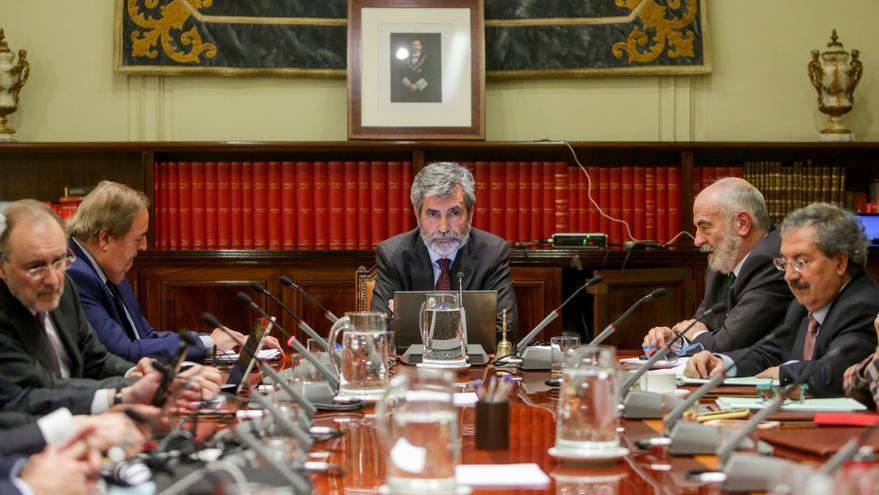 The Congress of Deputies will take this Tuesday the first step to reform the Organic Law of the Judiciary with the aim of limiting the powers of the General Council of the Judiciary (CGPJ) when, as at present, it is in office, by the blockade of the PP to its renewal despite having been in an interim situation since 2018. The forces that supported the investiture of Pedro Sánchez -PSOE, United We Can, ERC, PNV, Compromís and Más País-, as well as EH Bildu, have expressed their vote in favor of admitting the bill that, on the other hand, has received all kinds of disqualifications from the rights of PP, Vox and Citizens. Junts, for their part, has announced the abstention of its four parliamentarians, while the four from PDeCAT will opt for the yes.

Precisely in search of an agreement to renew the CGPJ Sánchez, he telephoned this Tuesday the opposition leader, Pablo Casado, as he promised for the last time on Friday, and they have been talking for 45 minutes without any progress, according to Moncloa . “President Sánchez has conveyed to the leader of the opposition that the Government is willing to reach country agreements with its formation and has reiterated the importance of complying with the constitutional mandate of renewing such important bodies as the CGPJ, the Constitutional Court, the Ombudsman and the RTVE Board of Directors – Moncloa points out in a statement – Despite the new call by the Prime Minister to fully comply with the letter of the Constitution of 1978, the conversation has not allowed progress and has only served to verify that the blocking position of the PP remains the same “.

The call came on the same day that the admission for processing of the PSOE and United Podemos bill that seeks to limit the functions of the governing body of judges while their mandate is expired, as currently is, was debated in Congress. since two years ago. That is the alternative proposed by the coalition partners after Sánchez froze the initiative with which he intended to change the majorities necessary for the renewal of the CGPJ and circumvent the PP veto.

PSOE and United We Can, the two partner parties of the Government that presented the initiative, have justified it in the “need to limit the decisions taken by an outgoing CGPJ, whose members have exceeded the constitutional period of mandate.” Thus, they consider that “powers such as the one to propose the appointment of the President of the Supreme Court, the Presidents of the Hearings, the Superior Courts of Justice and the National Court, the Presidents of the Chamber and the Magistrates of the Supreme Court or of the Magistrates of the Constitutional Court must be excluded from the jurisdiction of the Council when it is in office “.

In addition, they argue that “these limitations should also be established in relation to the appointment of the directors of the Judicial School and the Judicial Documentation Center, as well as the Vice President of the Supreme Court, the Promoter of Disciplinary Action, the Director of the Technical Office of the General Council of the Judiciary and the Chief of the Court Inspection “.

During the debate in Parliament this Tuesday, the PP deputy in charge of defending the position against his group, Luis Santamaría, launched a string of new outbursts against the Government. The parliamentarian considered the initiative to limit the management capacity of the CGPJ when it is in office as “one more provocation by the Government to have a justification that modifies the majorities to renew the CGPJ.” They are, in his opinion, “antidemocratic and fascist maneuvers” of the PSOE and United We Can.

The PP equates the Government with “woodworm”

“You are trying to impose a government of one-color judges and that is unacceptable in a democracy. You are much closer to the regime change that you propose,” Santamaría told the members of the Government, whom he accused of being “Sanchismo”. which he called “the broken toy of filoterrorists and socialcommunists”. “With these partners, you are to democracy what rotten wood, you enter the institutions to destroy them,” he added, in addition to accusing the Executive of “lying” in all its initiatives.

With a similar speech, the spokesman for Ciudadanos in Congress, Edmundo Bal, considered that the presentation of the proposal “is without more or more an insult. To the intelligence of the citizens, the Chamber and those of us who have dedicated our lives to Justice “, he said. In his opinion, “the three reasons” of PSOE and United We can present their initiative is “to weaken the Judiciary, pressure the PP and” appoint its people to positions in the Judiciary “to” influence the sentences. ”

“Today our justice is no longer independent,” added Macarena Olona, ​​of Vox, who has announced an appeal before the Constitutional Court in the event that the initiative is finally approved by Congress, once its parliamentary procedure is completed.

Previously, PSOE deputy Francisco Aranda had defended the initiative, considering that in the current legal regime “there is no legal regime for when the renewal” of the CGPJ “does not occur immediately when its mandate has expired.” In addition, he has considered that “Spain has been experiencing an institutional anomaly for two years” due to the blockade of the PP to said renewal, and has wanted to make it clear that “judicial independence is not threatened in Spain.”

On the part of United We Can, Jaume Asens has indicated, for his part, that “no democracy deserves a kidnapping of the judicial leadership and a subversion of the constitutional order like the one that the PP is committing”, due to its blockade of the renewal of Power Judicial. “We should be talking about the challenges as a society, but we are once again in an institutional crisis with two elements, the monarchy and the CGPJ, used as a battering ram against a government that came out of the polls amid a noise of sabers,” he lamented.

Criticism of the PP

Regarding the members of the investiture of the Executive, on the part of the PNV the deputy Mikel Legarda has considered, along the same lines, that “the most surprising thing about the controversy” about the renewal of the CGPJ “is that the PP has not proceeded to reestablish the system when it has had majority “. “He only proclaims and claims it when he is not in power and as a justification for blockades when he is in a minority and in opposition,” he denounced. The deputy of EH Bildu Jon Iñarritu, likewise, has announced his vote in favor although he has considered the measures contained in the text of the PSOE and United We Can “insufficient”.

“Who has believed the PP?” The spokesperson for Compromís, Joan Baldoví, asked himself. Next, he has referred to the formation chaired by Pablo Casado as “a party that is condemned and that is in court to try to erase evidence with reserved funds”, alluding to the investigations into spying on the former Treasurer of the PP Luis Bárcenas. Likewise, Baldoví has ​​asked himself “why the CGPJ does not resign or cease.”

More criticism against the Government has been expressed by ERC deputy Carolina Telechea. She has denounced that “two years ago the Government should have renewed” the General Council of the Judiciary “and it was not brave.” “Now we have an expired CGPJ, which has roamed at ease placing its like-minded, doing at will and ensuring its far-right hegemony,” he lamented.