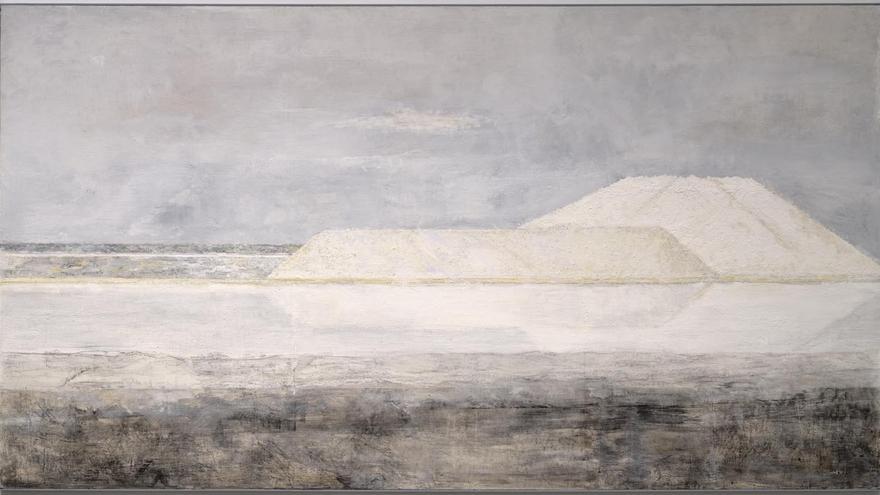 The Guadalquivir and its mouth. That is the landscape of Carmen Laffón and she was tied to it in the last decades when her painting evolved towards a more mature abstraction. The realist artist died this Sunday, at the age of 87, at her house in Jara, in Sanlúcar de Barrameda, near the views of her childhood. From the horizon of the one who claimed in the extraordinary series The preserve, made entirely from the window of an apartment in Sanlúcar, where the sky and the sea merge.

Next to The preserve, Lime and, above all, his latest series The salt. “This is his legacy,” says Juan Antonio Álvarez Reyes, director of the Andalusian Center for Contemporary Art (CAAC) in Seville, who has been very aware of his work and explains that with the turn of the century Laffón “felt liberated” and “it stripped away all its technical, thematic and vital limitations”. He remembers the phone call in which Carmen told him that she was already with a new series that she was going to like. Indeed, it was. The salt It was so important that they reserved it to show it in an exhibition that was shown in the CAAC and in the Botanical Garden of Madrid.

In addition to the canvases, he included a spectacular bas-relief composed of eight pieces, which Laffón worked in clay and transferred to plaster, to finally paint them one by one. As reported by the Reina Sofía Museum to eldiario.es, Carmen Laffón will have a room dedicated to her in the last part of the new reading of the collection that its director, Manuel Borja-Villel, is inaugurating in sections. The artist will have the honor of closing the tour of the collection, in Room A1, where the most recent works will be shown in the space that will be renamed “Carmen Laffón. La Sal”. The presentation of the final section will be on November 27.

“The set of eight bas-reliefs is of great interest to the museum and the new collection because it allows to complete the presentation of one of the fundamental artists of the Spanish art scene since the sixties. In the acquired work (thanks to the generosity of Helga de Alvear and Mario Losantos) the quality is perceived and fits into the discourse of the museum’s collection on ecology and the environment “, they indicate from the museum to this newspaper. They also point out that Laffón’s work since 2008 has delved into the bordering spaces between land and water.

“With the indefiniteness of forms in the bas-reliefs The salt, the artist adds polychromy to ensure that the landscape has a pictorial character as well as a three-dimensional object “, they explain from the sculpture area of ​​the Reina Sofía Museum. Carmen Fernández, the center’s chief curator of sculpture, points out that the series on the salt flats ( dated between 2017 and 2020) “stand out for being works in which the horizon line and the cubic or trapezoidal shapes of the salt piles are nuanced by their reflections in the water and by a dense and serene atmosphere, which reduces the color almost to the bichromía “.

The Reina Sofía also has three paintings, a drawing and a sculpture that was forged in the exhibition he held at the Silos Abbey in 2007. Then Laffón built a large plaster vine that presided over the exhibition. The museum does not exhibit any of the five. Years ago, Borja-Villel himself pointed to the Andalusian painter and Antonio López as faithful representatives of “a constant anachronism in Spanish art: the return to the realistic and academic order over and over again”. Álvarez Reyes denies this point: “She has never been academic. Quite the contrary. In Seville, in Spain it was an absolute revolution. And the great freedom of its last two decades has changed the perspective and the judgment of the whole world. Manuel Borja-Villel happened to see several times the exhibition of The salt in the Botanical Garden “, says the director of the CAAC.

“You know that museums never have money.” Helga de Alvear is speaking on the other end of the phone, a collector and gallery owner who has given the money to the Fundación del Reina Sofía to acquire the bas-relief of Carmen Laffón. The museum has chosen not to specify the price. “I don’t know how much the piece cost. I never ask those things. But she had a very nice gesture with me because she made one more piece and gave it to me for my museum,” says Helga de Alvear from her car, on the way to the center that carries her name, in Cáceres. There are five paintings (four from the series of The salt and one of Lime). In the CAAC they do not have a work of her and its director acknowledges that he has tried to achieve a piece by dation in payment, but it has been impossible. “I’m not going to give up until we get one for the painter’s collection, which was a total revolution in Andalusian painting,” says Álvarez Reyes.

The German collector, two years younger than Laffón, remembers her as “a friend.” They had an appointment for the next few days. Who knows if the painter was going to show him the first four paintings of the new series that she had started, with monumental canvases. He remembers that he began collecting it 15 years ago because his first works, when he was with the gallery owner Juana Mordó, did not interest him. “I did not like them and I did not demand that you buy them. Little by little we have become very close friends. He offered me to be an academic [en la Academia de Bellas Artes de San Fernando] and I rejected it, because I am a collector and I don’t know enough Spanish to be an academic. She got angry, “he says fondly.

The Metropolitan Museum of Art (MET) in New York has two still lifes from the late 1970s, but she never left her profile as a painter out of the spotlight and far from popularity. “She is a super artist, there is no doubt. But she never fought to be international. It happened. There are artists who want to be international at all costs, but others work because they like it. That was the case of Carmen Laffón,” adds Helga de Alvear. In fact, Laffón has the Gold Medal for Merit in Fine Arts (1999) and the National Prize for Plastic Arts (1982), but she was never recognized with the highest award, the Velázquez Prize, despite the fact that this year she competed in within the award jury with Tania Bruguera, final winner without unanimity.

The sea and the sky. The Guadalquivir and the salt flats. That was the landscape that she admired and loved, as she recognized in her entrance speech at the San Fernando Academy of Fine Arts, in 2000. For two decades, Carmen Laffón warned of the danger that the landscapes to which she gave herself were running. when he went outside to paint. He lamented the threat of human activity and the lack of awareness that his loss will entail. He also complained about the lack of appreciation for them: “They are part of our cultural heritage, as much as our most precious monuments and museums, because they are also living monuments and museums full of life. To ensure their conservation seems to me a primary duty. and I would very much like this institution, so guardian of beauty, to assume this new commitment, “he told the academics on the day of his admission.

I saw in these places spaces for evocation and dreams, for the enjoyment of silence, light and air. They were “not beautiful” landscapes, without the focus of Madrid’s Gran Vía, for example. Landscapes “humble and dry”, “naked and strange”, “of apparent simplicity and profound complexities”, said the artist. Not everyone accepted his dedication to landscaping with admiration.

His was lyrical and personal realism, more enigmatic than obvious, more imaginative than literal: art striving for truth that, paradoxically, sacrificed appearance. As Juan Bosco Díaz-Urmeneta wrote in 2014 about his views of the Coto de Doñana, “Carmen Laffón’s languages ​​are certainly free, but not free”, referring to a brushstroke that, little by little, was unraveling and losing limits.

The historian has compared these series of Laffón with the landscape of Caspar David Friedrich and Mark Rothko. “Faced with the pathos of Nordic painting, Laffón’s work possesses the complicity and sentimental closeness with nature typical of the Mediterranean vision,” said Díaz-Urmeneta, who found the transparency of color, the strength of light and the limits imprecise that separate the spaces, the values ​​that link Rothko with Laffón. After all, the natures of the Andalusian painter are unattainable enigmas. She herself has acknowledged having these two painters very present, such as Turner, Monet, Degas or Seurat. And always Fernando Zobel, with whom he trained, and the informalists, with whom he shared a gallery.

It has also been related to the virtues of Diego Velázquez, especially in the portrait of Juan Carlos I, which is kept by the Bank of Spain. The historian Isabel Tejeda indicates that the grayish backgrounds lacking in pageantry and decorative elements are those that connect with the Velasquez portraits of Felipe IV. “The Sevillian painter dispenses with the stiff formulas and normally loaded with regal symbols of the portraits of royalty, “says Tejeda.

This newspaper discovered in 2014, lying in the basement of the Caja Madrid Foundation headquarters, the portrait that Laffón made of Miguel Blesa for 159,000 euros. “Laffón was working on that work for more than two years, between the end of 2007 and the beginning of 2010. Blesa traveled a couple of times to his studio in Seville to pose,” Ignacio Escolar said at the time. The painter finished her painting a few weeks after Blesa left the presidency of Caja Madrid. He sent the painting with a collaborator to the Caja Madrid headquarters, in the Plaza de Celenque. For some unknown reason, during the presidency of Rodrigo Rato, Blesa’s portrait was never hung on any wall, neither at the Bankia headquarters nor at the Caja Madrid Foundation headquarters.