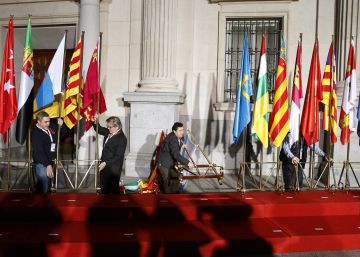 Summer is progressing and the regional governments are getting nervous. It is in these weeks when their coffers receive the transfers or deliveries on account that correspond to them under the autonomous financing system so that, as of the fourth quarter, they prepare the budgets for the coming year.

But this year the deliveries on account come from General State Budgets made in 2018, so there are no updates or increases. The extension of state accounts also entails the lack of new territorialized investments, which widens the economic breakdown of autonomy. Cuts in spending or extension of their own accounts are the scenarios that they don't want to count on but that are more than probable.

"For all the autonomous communities it is an important loss of money," they affirm in the Ministry of Finance of the Junta de Extremadura. "We calculate in 200 million euros what we stop entering due to the lack of deliveries on account and the change of the VAT system." In the community chaired by Guillermo Fernández Vara, the blocking situation "will affect the 2020 budget between 8% and 10%." On the steps to follow in this situation, they are not pronounced.

The same happens in Andalusia, in which sources of the Treasury declare that "despite all the difficulties and uncertainties, this Government is already working on the preparation of the Budgets for 2020". Of course, they recognize that "the instability of not having a government or PGE makes it difficult to forecast income."

What is evident is that in this summer of 2019 the autonomies of the common regime will cease to receive about 4.5 billion euros in deliveries on account of the financing system and that correspond to the update planned in the draft General State Budget for 2019 which was rejected in Congress due to lack of parliamentary support. This means that, by continuing to extend those of 2018, the amount to be received will be the same as last year, 102,856 million euros. This amount represented 7.2% more than that delivered in 2017. The lack of budgets also means that there will be no new investments. For Extremadura it is a jug of cold water in what "refers especially to railway infrastructures in the region."

There are communities that recognize “treasury tensions in the Autonomous Administration, which is the one that provides the most important public services: health, education and social services and the one that pays the payroll of all public employees”, they assure in the Xunta from Galicia. The community headed by Alberto Núñez Feijóo quantifies a debt for the blockade of 700 million euros, "of which 530 million are included in the current budgets," and was the first to complain. There was even a parliamentary initiative to request the central government to pay this amount, voted by the PP, the BNG and En Marea.

In other communities, the word “cuts” has come to light. The president of Cantabria, Miguel Ángel Revilla, warned a few days ago that the lack of state transfers and investments for his region will lead to cuts in the next Cantabrian budgets. In this community will cease to enter 135 million.

Other regional presidents choose to ask the opposition for responsibilities, such as the head of the Asturian Executive, Adrián Barbón, who said that "Citizens and Podemos are blocking Asturias from receiving 200 million euros."

The solution, today, is convoluted. In the Ministry of Finance they insist that the deliveries on account will be updated as soon as the Government is constituted and that, as Minister María Jesús Montero has stated, the State Advocacy has given the green light to be carried out through a Decree Law But this can only be done when there is an effective Executive, not a functioning one. Meanwhile, September is coming and deliveries on account do not arrive.