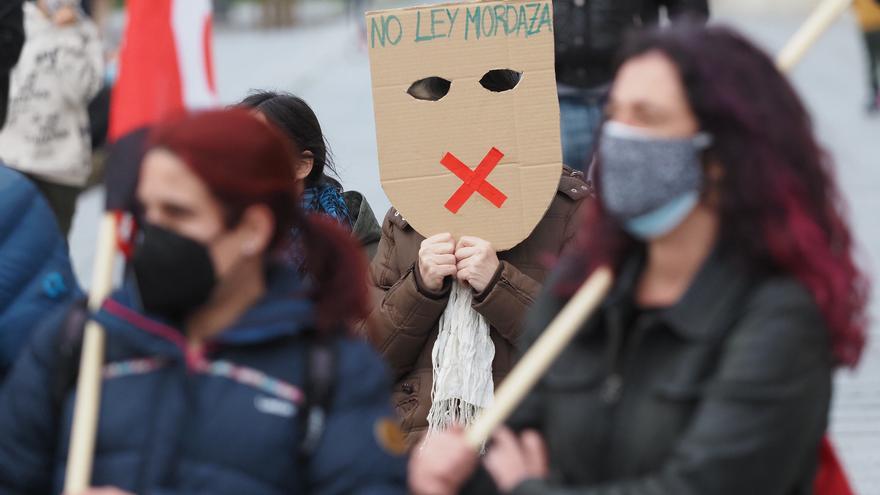 This time it does not touch the wild card of Europe. The president of the PP, Pablo Casado, often repeats that the European Union asks to reform the election system of the General Council of the Judiciary. He repeats it as many times as he is silent that the European Commission asks with the same insistence that the body be renewed, blocked for more than a thousand days by the PP, and that limits the request that judges be elected by “their peers” to the 12 members of judicial extraction of the 20 that make up the CGPJ.

Pablo Casado will also join the police demonstrations protesting against the reform of the gag laws, as well as his internal antagonist, the president of Madrid, Isabel Díaz-Ayuso, and the leader of the extreme right, Santiago Abascal. And, in this case, Abascal also turns a deaf ear to the reports of the European Commission and the Council of Europe in favor, precisely, of the reform of the Citizen Security Law. The same reports, precisely, that speak of the CGPJ.

The last Opinion on Spain of the Venice Commission of the Council of Europe it is clear: Spain should reform the Citizen Security law.

Said review “must be accompanied by an in-depth evaluation of the practical functioning of the law and its impact on human rights given its repressive potential,” affirms the advisory body of the Council of Europe, made up of independent experts in the field of constitutional law.

In its opinion of March 2021, the Venice Commission makes a series of recommendations, including that crimes “quasi-criminal“ (those for which high fines can be imposed) and the coercive powers of the police are described more precisely, and that detailed regulations at the sub-legislative level are adopted to reflect the recent jurisprudence of the Spanish Constitutional Court to serve as a guide to the policeman in his daily work.

The opinion was requested in October 2015 by the Monitoring Committee of the Parliamentary Assembly of the Council of Europe. The Venice Commission postponed its preparation due to the elections in Spain and pending the examination of various provisions of the law by the Constitutional Court, and resumed it when the Constitutional Court issued his sentence of November 2020, in which he endorsed a large part of the rules.

The opinion of the Venice Commission focuses on the provisions that have attracted the most attention in Spain: the regulations on controls and searches of people in public places; surveillance of spontaneous demonstrations and the responsibility of their organizers; the severe administrative penalties provided by the Law and the returns of foreigners at the Spanish border in Ceuta and Melilla.

The Venice Commission relies heavily on the findings of the Constitutional Court. However, he believes that “if a norm leads to abuses in practice, this norm should be modified, circumscribed or accompanied by additional safeguards, although in theory it is constitutionally acceptable.”

The Council of Europe encourages the legislator “to carry out an in-depth evaluation of the practical functioning of the law and its impact on human rights and freedoms. Given the repressive potential of this law, such a review should be carried out regularly.”

According to the opinion, the Citizen Security law “contains a series of provisions that entrust the police with broad powers, but do not indicate in which situations these powers can be used, or what kind of measures can be taken. Some crimes are also formulated in the law too broad. ”

The Venice Commission recalls that “the clarity and predictability of the law guarantee equal and non-arbitrary treatment and legal certainty (understood as the predictability of State action) is particularly important in the field of criminal law. Due to the nature of the infractions and the seriousness of the fines provided for in Law 4/2015, it could be said that they can fall within the scope of criminal law. Therefore, the Venice Commission recommends that such crimes quasi-renal and the coercive powers of the police are more precisely described. “

To compensate for the indeterminacy of certain provisions of the Law, the Venice Commission recommends “the adoption of detailed regulations at the sub-legislative level, which would reflect recent constitutional jurisprudence and serve as guidance to the police. It is also important to strengthen the internal monitoring mechanism within of the police itself, which would help identify patterns of use of police powers, detect abuses (such as arbitrary identity checks, discriminatory profiling, etc.), facilitate subsequent external inspections of police forces, and ultimately allow Parliament to analyze the practice of the use of coercive powers and modify the legislation accordingly. It may also be necessary to strengthen existing mechanisms for judicial review of police action and make them more efficient and accessible. “

In this sense, the Venice Commission recommends, with regard to personal controls and external body searches in public places, that the law binds them “to the purpose of discovery and prevention of crimes of a certain gravity” and that it establishes ” that, as a general rule, they are carried out on the basis of an individualized suspicion “. As for random searches, “their use must be circumscribed and accompanied by procedural guarantees, including adequate monitoring mechanisms.”

According to the ruling, “the law must specify that the authorities must tolerate spontaneous demonstrations, even those that were not notified in advance or that deviate from the conditions established in the notification, unless there is a verifiable risk of ‘substantial disorder’ , and also “should specify that the organizers and promoters of demonstrations cannot be held responsible for the failure to notify the authorities or for the non-compliance with the format established in the notification if the concentration was spontaneous or if the deviations could not be reasonably foreseen or avoided by the means at the disposal of the promoters and organizers “.

The amount of penalties provided for by law, especially those for serious and very serious infringements (up to 600,000 euros in the latter case), “seems quite high in the Spanish context”, says the Venice Commission: “In view of the imprecise definition of some crimes (most notably the one that speaks of disobedience to the authorities), these fines can have a paralyzing effect on the exercise of freedom of assembly. Therefore, the amounts of the fines should be reconsidered “.

Furthermore, “some of the penalties provided by law can be characterized as essentially criminal. Therefore, the procedure in which they are imposed must satisfy the basic requirements of a fair trial set forth in the European Convention on Human Rights, in its criminal aspect. The presumption of veracity of the police reports, the immediate execution of heavy fines and the lack of right to legal assistance weaken the position of the accused before the State. The legislator should ensure that the alleged offenders enjoy at least the guarantees minimum requirements in the European Convention on Human Rights “.

In relation to the returns of migrants at the border “who try to cross illegally into Spanish territory in Ceuta and Melilla, the Venice Commission recognizes that Spain is in a difficult situation of having to defend its borders and at the same time comply with its obligations. under international law “.

However, the Commission “considers that the Law should specify that police officers should not proceed with the rejection at the border if, under the circumstances, they see that a foreigner has compelling reasons not to use the ordinary asylum application procedures.” .

The recent report on the rule of law in Spain published by the European Commission last July, it confirmed that “a review of the Citizen Security Law is being carried out as a result of the concerns raised.” The document of the Community Executive stated that “concern persists over the negative impact on journalists of the Citizen Security Law, in particular on photojournalists.”

“The Citizen Security Law of 2015, which, according to its preamble, aims to protect people and property and maintain public peace through the regulation of police interventions and other matters, raises concern,” states the report by Brussels: “In November 2020 and January 2021, the Constitutional Court issued two judgments, concluding that most of its provisions are constitutional, if interpreted in good faith, in particular with regard to the principles of proportionality, non-discrimination , efficiency and respect for rights and freedoms “.

“However,” says Brussels, “a provision of the law was declared unconstitutional in relation to the prohibition of the ‘unauthorized’ use of photographs and videos of police officers.”

The European Commission report recalls the March 2021 opinion of the Venice Commission, “highlighting that even in cases where a norm is considered constitutionally acceptable, if in practice it has given rise to abuses, it must be modified or accompanied by additional safeguards “.

Thus, Brussels insists that “the opinion [del Consejo de Europa] encouraged the Spanish legislator to carry out an in-depth evaluation of the practical functioning of the law and its impact on fundamental rights and freedoms. Parliament is currently reviewing the law and it is important that this opinion is taken into account “