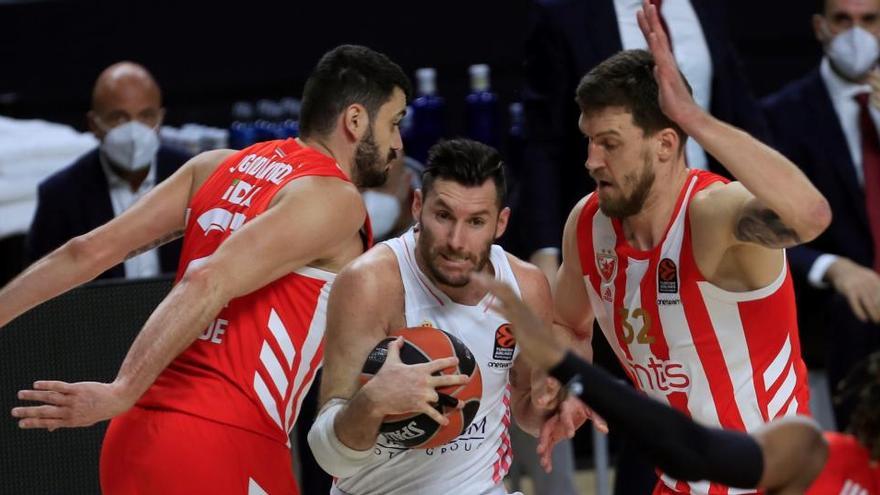 He Red Star surprised by winning the Real Madrid by 77-79, after a game to which the locals were late in the first half with a weak defense and too dense an attack.

The teoric inferiority of the Red Star and the accumulation of matches led to Real Madrid not going out at the usual pace of revolutions and that together with the leading role of Corey Walden, 16 points at halftime with 3 out of 5 triples, made the Serbian team dominate in the first twenty minutes.

The Madrid defense was not the usual energy and the Serbs took advantage of that, and without doing great things they dominated practically all the time.

Nicolás Laprovittola, in the first quarter, tried to put some sanity in the Spanish game, but little by little it was diluted and there was no one to come to the rescue.

Neither Walter Tavares, nor Trey Thompkins, nor Alberto Abalde, nor Jaycee Carrol were at his height and alone Rudy fernandez, author of two triples without failure, proposed a solution.

The result was 21-23 of the first ten minutes and 40-45 with which the teams went to the locker room.

The safe talk of Pablo Laso on the break caused an increase in the intensity, energy and rhythm of its players, something to which the departure of Jeffery Taylor, unprecedented in the first twenty minutes, also contributed to take charge of Walden’s defense.

The scoreboard, however, was slow to reflect the local improvement (43-50, min.22.30), although Walden’s scoring and playing flow blocked, the sensations began to improve, 51-54 (min.25).

Quino Colom took over from Walden at the controls of the Balkan team, but Madrid continued with fluidity problems in attack and that led to the third quarter continuing to have a Serbian color at the end, 58-66.

With ten minutes to go and pressed for the score, Madrid hit the bar when in minute 32 the Red Star reached 10 rental points, 58-68, and shortly after a new loss of the Madrid ball caused the income to increase, 58-70.

With four little ones, including Carroll, and Tavares, with Rudy as a false low post, Madrid tried to turn around a game in which the Red Star had grown too much, 63-72 (m.35).

With triples from Carroll and Rudy, Madrid tried the comeback, but the Serbs knew how to withstand the storm by lengthening their attacks.

One minute to go Rudy suffered an unsportsmanlike foul and had to retire after the blow he hit on the back. Madrid came within three points, 73-76, and with 5.6 seconds to two, 77-79, but in the end they drowned on the shore.

Incidents: Match corresponding to the nineteenth day of the regular phase of the Euroleague, postponed in its day due to the snow that fell on Madrid, played at the Palacio de Deportes (WiZink Center), without an audience.