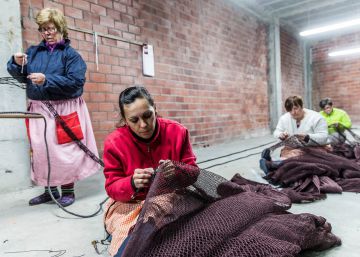 His life is not sewing and singing. Women who darken the nets in the ports of northern Spain twist their bodies for hours to repair the rigs without which the sailors could not fish. They are cold in winter and hot in summer, sometimes outdoors, without fixed schedules, holidays, or a salary closed at the end of the month. They charge about eight euros an hour. Or just 24 euros for the whole day when they get paid for pieces. And they – 566 women and 90 men – are the only sea workers who do not enjoy early retirement. Fed up with the situation, they went to the Ministry of Labor To ask for changes. In April they were told that the improvement would be negotiated. Then they added that they should negotiate for them the brotherhoods, eminently male organizations where they have no voice or vote. They have written outraged to the Vice President of the Government and Minister of Equality, Carmen Calvo, to intercede: "Our rights are again vilified by a patriarchal proceeding and with their backs totally to the voices of the companions and partners."

"A lot of people talk about breaking the glass ceiling and the showers have been put on a triple layer", sums up, outraged, Verónica Veres, spokesman for the collective in Galicia, the majority in Spain. “If this work were well paid, women would not be doing it,” adds María Teresa Costales, of the Association of Low Waters of Asturias. He has been sewing nets for 21 of his 61 years. He has bad bones "because of the humidity." The showers suffer ailments in the extremities and in the back for handling the heavy rigs and performing repetitive movements in forced postures. Also cutaneous and ocular conditions abound.

After the disaster of Prestige, almost 20 years ago, they began to associate to improve their conditions. The last step is to ask for the early retirement enjoyed by sailors for decades and also dockers or shellfish makers. A decree allows it to be negotiated ex officio from Work or by the interested group. The Secretary of State for Social Security, dependent on Labor, who directs Acting Magdalena Valerio, refuses to initiate ex officio the administrative procedure so that they can advance their retirement and summons them to go to the National Federation of Fishermen's Associations or associations of freelancers. A spokesman explains that "this process at the request of the Administration is very complex and prolonged in time" and that if they do not make the request through this "accredited representation", the procedure "can be challenged and easily paralyzed by a judge " The Galician Federation of Redeiras, the majority, argues that Labor "promotes gender inequality" by forcing them to go to fishermen's associations to fight for their rights, as denounced in the letter to Calvo. "Recommends that a federation of women be subject to the mandate and decision of an organ of patriarchal tradition that does not understand or share the needs of our professionals," they complain. The Secretary of State for Social Security has not responded to questions raised about this possible discrimination. ESADE professor of pension expert Ignacio Conde Ruiz believes that it could be gender discrimination because they are mostly women and should have an improvement that the rest of the fishing sector, mainly male, already has. And he adds that this discrimination "is amplified because they make them negotiate through the brotherhoods, in which they are not represented."

They explain that the brotherhoods have never allowed them to be full members but only collaborators: they pay the fees but they have no voice or vote in their decision-making bodies. María Teresa Costales, from the Asturian association, tells them that they asked for help almost 20 years ago, when they joined to seek improvements: “They told us that we had nothing to ask because we were not members. After that we don't ask for anything else. ”

"We show our absolute willingness to request what they deem appropriate, we have no problems in making the arrangements," said Basilio Otero, president of the National Federation of Fishermen's Guilds. He admits that they are not full members because they only have that status "the fishermen or who has a bat, and that also includes women." He adds that they did not get early retirement before "because they did not apply." He does not answer the question of whether they deserve this improvement because of their working conditions: "We will submit the application and the Social Institute of the Navy [Labor dependent] will tell us what the scale is." However, it is worth noting that they do not spend time away from home, that they work in ships “where it does not rain” and that the cold or rain suffers if they have to sew on board the ships.

Three out of four irrigators work in Galicia, and they do it outdoors or in port ships without bathrooms. The fight led by the Galicians has behind those of Asturias and Cantabria, in a similar situation. Those of Euskadi support them, although they assure that in their case the brotherhoods – exclusively formed by men -, do attend to their needs although they are not full members either. The 40 Basque watersheds work in ships with heating and it is the associations that assume the expenses of the facilities. The president of the Association of Neskatillas of Ondarroa, Inmaculada Peiro, explains: “We cannot speak against the men of the brotherhoods nor do we miss belonging to them because they attend to all our claims. But we fully support the struggle of our partners. More problem for us than early retirement is the lack of generational relief. ” In this, again, the problem is common: the young women do not want to dedicate themselves to the work of their mothers, to whom they have seen going out to sew at any time, with cold or heat for a job that, in the best month, barely lets be mileuristas.

Feminized fishing trades suffer a clear labor discrimination, according to a report signed by jurist Manuela Sobrido Bretal and economist María Do Carme García Negro. In addition to the fact that the showers are the only ones in the sector that do not enjoy early retirement, the reducing coefficient of shellfish manufacturers – which is used to calculate how much they can reduce their working life due to the hardness of their work – is the lowest. On the other hand, a job of male prevalence like that of dockers, very sacrificed in origin but today mechanized, does enjoy this work improvement and to a greater degree than shellfish makers.

Positions traditionally occupied by women suffer from "obvious discrimination" despite the fact that "their conditions are tougher than others usually performed by men," says the report. And he adds: "These groups have to develop their work in painful conditions that undoubtedly affect their health and also the right to a welfare identical to that of the remaining workers in this sector."