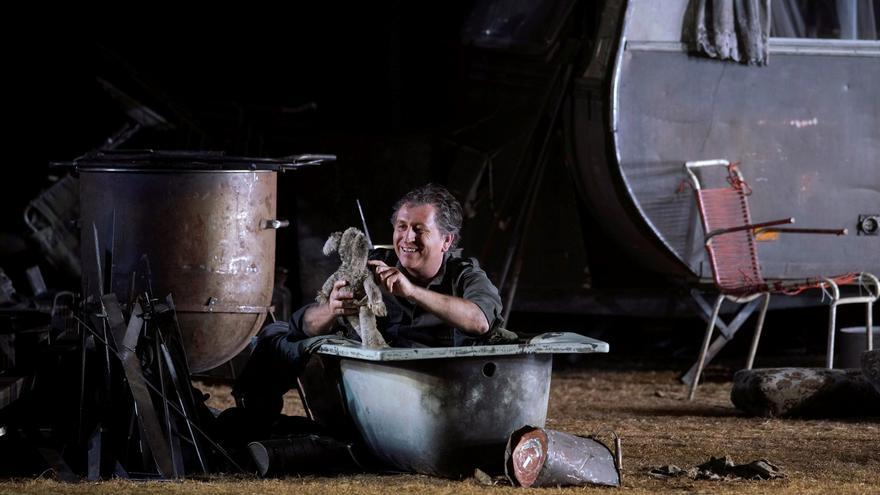 Madrid, Feb 13 (EFE) .- If it was not gold, at least some of the precious metals from the Nibelungen treasury has managed to get the Royal Theater out of this pandemic, by forcing it to the difficult premiere this afternoon of “Siegfried” a redistribution of the orchestra beyond the pit that has resulted in an immersive sound, “surround” say those responsible, a feat in these times.

On the return to Madrid from another of the episodes of the great Wagnerian epic of “The Ring of the Nibelung”, the nearly one thousand spectators attending an atypical evening until its start (at 4.30 pm to reach the curfew ) have applauded this finding, the fruit of the tireless work of Granada-born director Pablo Heras-Casado, who has won much of the recognition, along with the cast, especially the tenor Andreas Schager.

Separate mention has deserved the exit to the tables of the Canadian set designer Robert Carsen, who has received some loud boos for his innovative proposal, but also cheers from those who have enjoyed it and have wanted to silence the reproaches of that sector of the public.

Repeating the formula that between 2001 and 2004 allowed the enjoyment of all parts of this tetralogy in consecutive years, the five hours of “Siegfried” in three acts have today taken the witness of “The Valkyrie”, which in February 2020 was saved by the hairs of the outbreak of the pandemic.

By dates, it did not have to face the challenge of locating the almost one hundred musicians that this opera also requires, including its six harps, in an exceptional moment in which interpersonal distance is essential for safety.

After months of meetings, for their representation in the midst of the covid-19 crisis, it has been decided to keep most of the musicians in the pit, slightly reducing the string part “to the levels of any European theater that assumes ‘The ring’, with the necessary density for such a work, “explained Heras-Casado.

Likewise, in the eight neighboring boxes the harps and a small group of sharp percussion have been placed on the left side due to their related color; to the right, the serious metal for its “block role” in this opera: trombones, trumpets and tuba, which was the first to open fire, probably catching more than one off guard due to the unusual origin of those initial bars thrown to the ground from the side.

The replica game from one part of the Real to another has been constant, especially enjoyable in the most memorable musical episodes, such as the murmurs of the forest or the awakening of Brünnhilde, near the end, when after a very expansive moment a chord of my Mysterious and mystical minor from the pit, which is transformed into a C major that comes from the trombones part and this one, after “a crescendo”, goes up like a flash that goes to the harps.

The finding, on the other hand, has made the interpreters sweat ink to be able to impose their voices on those serious winds placed on the same plane, especially when they have blown something stronger, a Herculean task more than adding to those of by yes demanding sheet music by Richard Wagner.

If we talk about heroes, we cannot ignore in that sense the role of the tenor Andreas Schager as Siegfried, who barely steps off the stage and who strategically balances the energy to exploit it at the most critical moments, such as the forging of the Notung sword or the famous discovery of his beloved (that of “Das ist keiner Mann”).

In addition to the Austrian, seven other singers with outstanding Wagnerian voices perform this opera, some of whom have returned to the Royal to reprise their roles from the previous episodes, such as the bass-baritone Tomasz Konieczny (El viandante / Wotan) and the soprano Ricarda Merbeth (Brünnhilde).

The cast is completed by the tenor Andreas Conrad (Mime), the bass-baritone Martin Winkler (Alberich), the soprano Leonor Bonilla (bird of the forest), the mezzo-soprano Okka von der Damerau (Erda) and the bass Jongmin Park (Fafner) .

Told the origin of the hero protagonist in the previous episodes, “Siegfried” focuses on his apogee as a representation of a new type of man, strong, free from the moral ties and conventions of his ancestors, from all fear, also from greed in tune with nature, wild.

This is what this opera is about, which is driven by the dilemma between the ambition for power and the need to control it to save ourselves, between dominating nature or reaching a balance with it so as not to destroy each other.

This explains the iconic scenography that the Canadian Robert Carsen devised more than 20 years ago, together with Patrick Kinmonth, for the Cologne Opera and which has been chosen for this return to Madrid, a kind of post-industrial “Mad Max” in the that the desert is replaced by a depleted forest, that it is a dung heap.

Between broken washing machines or the now famous caravan that shelters Mime’s dwarf blacksmith, there is no trace of elements that refer to the mythological and pre-temporal origin of history, nor in the dragon Fafner, turned into an imposing excavating machine (another symbol of voracious capitalism ), since the call for attention to the corruption that underlies it is more present than ever.

“Right now an outgoing US president has been charged with very serious crimes,” Carsen recalled this week.

But “Siegfried” also deals with love as a redemptive balm, about the effects of its absence on parent-child relationships and, above all, the one that springs up between the two young protagonists, who in this part of the tetralogy end up happily together after that the hero finally knows fear, precisely in the face of vertigo for the desired person.

After today’s, “Siegfried” will have another seven more functions that can be enjoyed until March 14 and that will alternate next month with the new production of “Norma”, by Vincenzo Bellini.