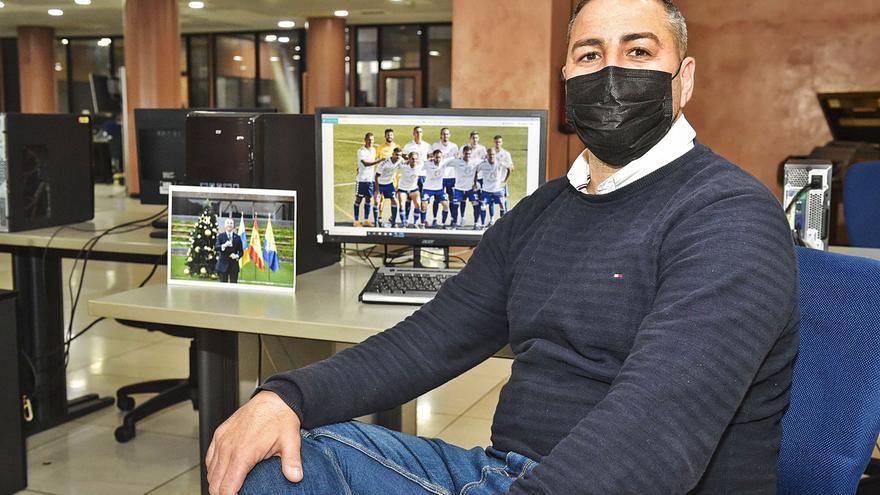 A neighborhood club against the ‘small sail’. Héctor confesses that there is no premium for overthrowing the UD. “It is a different, beautiful and strange game; I had never wanted Las Palmas to lose in any of its categories ”. He admits that he has not yet spoken to Michelangelo. In the Ramírez house, Francisco, the father, has no predilections. “These are holidays, we haven’t talked about football yet. My father? He will be happy whatever happens. A sure one will win, and for the tie, he will also toast ”.

If a “hand” arrives for the “Támara”, the father of the child does not conceive celebrations in the purest Joan Gaspart style. 0-4: “I would never do it, nor is it part of my education. And less before a team that I love; UD is the team of my heart. I have been working directly or indirectly with Las Palmas since I was 19 years old in the security area. I am a subscriber to the yellow club and Tamaraceite ”.

With an expense of 450,000 euros, the capital club is the pride of a neighborhood. Humility as a flag. In that latitude of the capital, the children seek to emulate the Moco David González. “In the Salva Sport store in Tamaraceite, more Támara shirts are sold than those of UD, Barça or Real Madrid. Our success is backed by the quarry. We do not charge the young people in the chain, it is one of our hallmarks (…) It was my brother’s idea, not to charge them fees and to offer them this beautiful outlet ”. The president would not change his coach Chus Trujillo for Juan Manuel Rodríguez -preparator of the ‘small candle’ of the UD-. “He accumulates eight years with me, he is responsible for the success. He was the coordinator, since I started on this journey eight years ago. He was the first one I sat down with to develop the master lines of this project. With our idea we have gone to the end of the world, and we have reached Second B. So we can have a competitive base chain ”.

The brothers grew up with a ball. Street art. Naughty prototypes. There was no PlayStation or Wasap. “Miguel Ángel is a benchmark for me in all areas. Overcome the sentimental side. He taught me everything, in terms of work, training, football, management … He is the main culprit for the success of Támara. The seed of the club’s social work is yours. Leave a human heritage. He worked on the genesis of the idea and we now try to enlarge it every year. Everyone has an idol in their life, for me he is my brother ”.

The fact of going second in the table and being the revelation team in their debut in Second B – thirteen points, one defeat and seven units more than the yellows – does not pervert the executive of his destiny. “We are not favorites; absolutely. Canarian teams take away many points when they face each other. It has the example of 2007-08 when there were seven groups from the Archipelago in Group I of Second B. Here we all know each other, we measure ourselves in preseason to acquire the precise tone and respect is lost. I reiterate that the forces are equal. Juan Manuel does a great job and now we are seeing a stronger subsidiary. It will be difficult to get your hands on it; we are aware of the degree of complexity. Above all, respect and humility ”.

Héctor had a predilection for Juan Carlos Socorro. At present, he lives with a juggler, who also took away his sleep in Gran Canaria. “David González is the highest quality footballers I have ever seen. He was not lucky enough to reach First because of the mysteries of the ball. It’s art”. From the Hispanic-Venezuelan [286 duelos con la UD y ahora técnico del Panadería Pulido San Mateo], applauds his “overflow, ability and faced.”

Afternoons in the Insular and behind the benches of Gran Canaria. Experiences, always in the shadow of his brother, whom he tries to dethrone in the morbid derby. He has Moco, “the stereotype of the skilled” and an invincible equation. Consistency opens doors and seeks to set the Annex on fire. “My dream was to take him to Third; the ceiling is marked by the players. They have shown me that they can take on anyone. Second B is the roof. Going up would force to execute a structural revolution ”. 90 minutes and the idol as a rival. There can only be one brother left.

Chus Trujillo: “We measure ourselves against everyone’s team”

Chus Trujillo, head of technical Tamaraceite, labels the pulse before Las Palmas Athletic of “special” and praises Juan Manuel. “It is an unprecedented derby and we face it with enthusiasm, many of our players have been in the yellow house, both in the first team and in the rest of the chain, as is my case [llevó el Disivión de Honor de Viera y Vitolo con Mingo Oramas]. We are delighted to return to the Annex and to face everyone’s team, because UD is everyone’s team ”. On the level of the rival, he warns that he responds in a “compact way”. “We go without confidence because we know that a subsidiary does not compete on equal terms. Juan Manuel, in this case, does not know until the last minute who he has. We knew that as the competition went on, this team would improve. They have been undefeated for a while [50 días], It is very difficult for them to fit in and generate opportunities (…) From the hand of their coach, we will measure ourselves against a compact, serious block and above all: disciplined. We are going with ‘zero confidence’ to face a magnificent team, on a magnificent stage ”. Regarding David García, he adds that “it would be a bittersweet joy if he defeats the shield that was his home for so many years, to which he will return with total justice.” | Agencies

The Hawks smash some Wolves to which Ricky Rubio returned

The Argentine MotoGP Grand Prix postponed to October or November