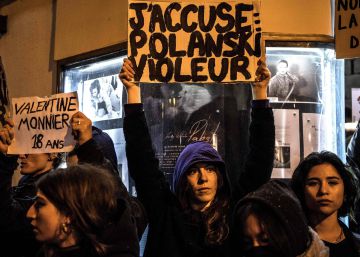 The rain of nominations to the César, the most important awards of French cinema, to the director Roman Polanski for his last movie, The officer and the spy, have returned to relaunch the controversy, still unsolved in France, about whether to separate the work of its author when it has a bleak and even criminal past, as is the case of the Franco-Polish filmmaker, in terms of sexual abuse of Very young women

Few doubt in France the quality of The officer and the spy, aspiring, among others, to César the best director (Polanski), the best film and the best actor (Jean Dujardin), among others. But nobody has forgotten at the same time that, coinciding with the premiere of the film, another alleged victim of Polanski —Required by the US Justice for abusing Samantha Geier in 1977, when the victim was 13 years old—, ex-model and photographer Valentine Monnier, said last November that the director raped her and hit her chalet in Switzerland in 1975, when she was 18 years old.

“If rape is an art, give Roman Polanski every Caesar! 12 nominations for the movie The officer and the spy from Polanski! 12 as the number of women who accuse him of rape! Shame on the Caesar. By praising a pedophile and escaped rapist, the victims are silenced, ”the feminist association Osez de Féminisme denounced on social networks, which already He has called for a demonstration on February 28 before the Pleyel Hall in Paris during the 45th Caesar ceremony.

Another paradox of the César this year is the nomination for César as best actress of Adèle Haenel, who almost at the same time that Monnier spoke also shook her to the world of cinema by revealing that she had been a victim, when she was just 13 years old, of harassment sexual director Christophe Ruggia, who has just been charged with sexual assault against a child under 15 and is under judicial control.

The success of Polanski’s film also comes at a time when French intellectual circles continue to debate their long-standing laxity for crimes such as pedophilia, following the publication of The consent, the book where the editor Vanessa Springora tells about her relationship in the mid-1980s, when she was only 14 years old, with the French writer Gabriel Matzneff, 50.

What has scandalized many in France, including some members of the Emmanuel Macron Government, is not Polanski’s response, which still categorically denying the new accusations as others have rejected in the past, but the almost indifferent reaction of those responsible for the most prestigious awards in France.

The César “are not an instance that must have moral positions,” said the president of the Academy of César, Alain Terzian, on Wednesday before the controversy raised as soon as the nominations were announced. “Unless I was wrong, 1.5 million French people have seen their movie. Ask them, ”he added.

A response that the Secretary of State for Equality did not like, Marlène Schiappa. “Watch the movie, it may be something without a message. But to applaud a man accused of rape by several women is something that shocks me ”, he replied on Thursday at the LCI network, where – as he said in other media the day before – he considers that the rain of nominations for the awards makes “question the message that this sends.” In the last edition of the Venice festival, its president, Lucrecia Martel, indicated that although she did not question the presence of The officer and the spy in the show, she I wasn’t going to go to the gala screening of the Polanksi movie because he could not separate “the man from the work” and because he felt representative of “many women in Argentina fighting for issues like this.”

“I have the feeling that French cinema has not finished its revolution in the fight against sexist and sexual violence,” Schiappa continued Thursday. “It has long been said that when a man is accused of rape by a Woman, the poor man sees how his career is destroyed and what is the end of his life. Here we see that, clearly, it is not at all the case and that, in general, it is rather women who have the courage to speak who see how the doors are closed, ”he lamented. The head of the fight against sexist violence in France recalled that Me Too began precisely in the world of cinema with the complaints to producer Harvey Weinstein – whose trial has just begun – and lamented that, with the nominations to the César, the French cinema is sending the message that “the victims of sexist and sexual violence are not interested”.

The Minister of Culture, Franck Riester, has been more cautious in declaring that the Academy is “free of its elections and its way of functioning” and that it is not for him to “intervene in his nomination process or define the conditions of movie eligibility. ” Even so, Riester said, that he has strongly condemned the Matzneff case and that after the controversy with Polanski and Ruggia announced that the aid of the National Cinema Center will be from now on conditioned on the prevention and detection of risks of sexual harassment, “Talent is not an extenuating circumstance or genius a guarantee of impunity.”

Kleber Mendonça Filho and Maggie Gyllenhaal will be jury of Cannes