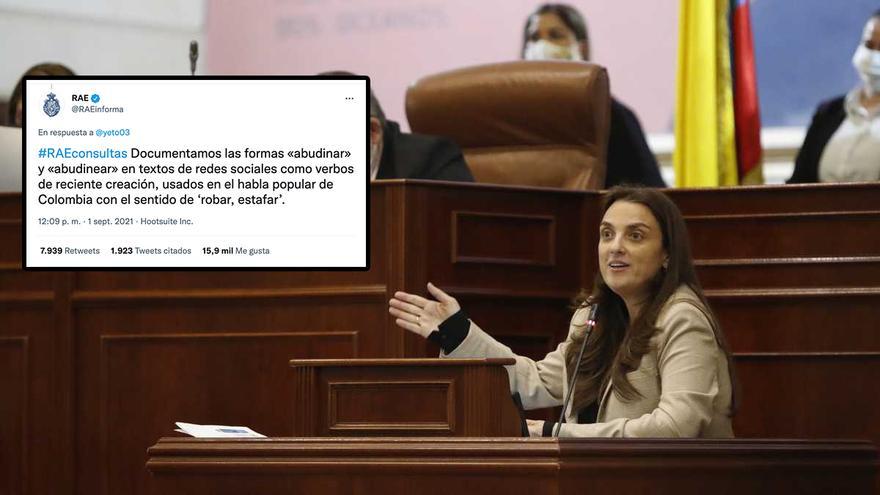 Language correction and digital environments often have a complicated relationship. The inheritance of contractions from the SMS language and the informality or colloquial expressions that prevail in many of these spaces (from Twitter to WhatsApp) make it difficult to keep the rules at bay. What is less usual is that a word invented in social networks involves a case of alleged corruption in Colombia and the RAE.

On many occasions, a distinction is still made between what happens in digital environments versus what happens in face-to-face environments. As we have already seen with the memes that end up being banners in demonstrations, the reality is more stubborn and the relationships between the two spheres are much more complex. How does a political representative end up using in the Plenary of the House of Representatives the expression “do not abudine the word”? What does abudinear mean and how does it arise? The origin is in the surname of the, until recently, Minister of Information Technology and Communications, Karen abudinen.

Colombian politics belonging to the liberal Cambio Radical party, which forms an alliance with the conservative party Centro Democratico of the current president Iván Duque (involved in another controversy at the Madrid Book Fair), he had been involved in a controversy for months and before his recent resignation he was going to face a vote of no confidence in Congress. The origin of the controversy is that his ministry awarded the company Unión Temporal Centros Poblados a contract of 1.07 billion pesos (260 million dollars) to connect 7,000 schools in rural areas to the Internet and it presented false bank guarantees. In addition to these irregularities reported by various journalists, the company received an advance payment of 70,000 million pesos (about 19 million dollars) that still does not appear.

Social media started using the words “abudinear” and “abudinar” in late August. “The growth in use of the term seems organic. There have been some voices that said it was coordinated. From our organization we find that the first mention there is and it looks like a bot, so there is a theory that there was an articulated beginning. But what cannot be denied is that it later developed organically, “he says. Carolina Botero, director of the Karisma Foundation, dedicated to the promotion and defense of human rights on the Internet. The content production was unstoppable during the following days, generating all kinds of memes. Or the complete conjugation of the supposed verb.

As is usual in these cases, social networks continued the party-protest with joy and profusion, as every time criticism and humor are united. The hype it hatched when a user decided to ask the RAE about the verbs ABUDINAR or ABUDINEAR. AND the institution answered: “We document the forms« abudinar »and« abudinear »in texts of social networks as recently created verbs, used in the popular speech of Colombia with the sense of ‘steal, cheat’”.

“It was clear that it was a parody that was used as a form of protest against the government’s insistence on supporting the minister in the face of criticism. But when the RAE answered … it was like gasoline on fire. It went viral and on top of that she was offended, which generated a Streisand effect”Says Botero. Karen Abudinen was not only offended, but in the midst of this digital and political upheaval, she made a risky decision: He addressed the RAE on Twitter through a thread in which the institution complained had been used “by digital packs to incubate the false belief that my last name was adopted by them as a verb that means” steal or cheat “in Colombia.”

The RAE he had previously specified in his Twitter account in response to another user that documenting “does not imply its official recognition, much less its inclusion in the academic dictionary.” What happens is that some media assimilated “document” as “accept” and that generated much more noise: “The RAE is gender neutral … but here they did not realize that they were getting into a political dispute”, Botero comments surprised. In fact, the difference between the generosity with which the RAE has spoken to acknowledge that this was happening versus the firmness with which it usually intervenes when it comes to its position with respect to the generic masculine and the use of the letter is striking. “E” as an inclusive gender marker.

Many words end up being accepted in the diction as a result of their popularization. It is not something new. In some cases it happens with surnames that end up being adjectives (Dantesque) or nouns (sadism). What is a little less common is that a surname ends up forming a verb. For example, both “lynch” and “guillotine” share a history similar to that of “abudinear / abudinar” with respect to their origin. Charles Lynch was an American landowner and revolutionary who headed an irregular tribunal in Virginia to punish the pro-British during the American War of Independence. His name gave rise to the term “lynching” and the verb “lynching.” French surgeon Joseph Ignace Guillotin, a deputy in the National Assembly, recommended the use of a decapitating machine during the French Revolution. Hence the terms “guillotine” and “guillotine”.

On Thursday morning Karen Abudinen resigned assuring in a video while reading a statement that he had acted with honesty and transparency. “Of course, it cannot be said that social networks were the ones who overthrew the minister. Because there were journalistic investigations and political pressure. But it has contributed significantly ”, decided Carolina Botero. Or as he said a Colombian citizen on Twitter: “Tristán Tzara, the DADA teacher, dreamed that one day language would have the power of a punch, a few centuries later the conjugation of a verb (Abudinear) knocks down a corrupt Minister, finally words are things.”