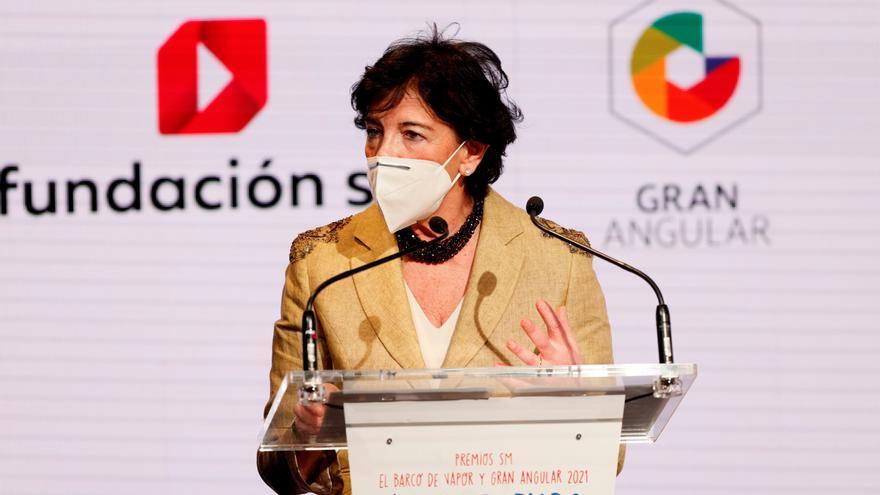 Madrid, May 11 (EFE) .- Queen Letizia on Tuesday expressed her gratitude to all those who are part of the book sector for having allowed citizens to “feel better” thanks to the “restorative power” of reading.

Doña Letizia presided over the 43rd edition of the SM awards for Children’s and Youth Literature El Barco de Vapor and Gran Angular, which went to the writers Beatriz Osés and Chiki Fabregat, respectively.

The event took place at Casa América in Madrid, with the presence of the Minister of Education, Isabel Celaá, and the president of SM, Luis Fernando Crespo.

The queen has joined the messages of encouragement from the winners to enjoy and learn from books.

At a time when “the battle to win the attention of the youngest is raging”, the queen has opined that “standing, sitting down and opening a book and reading it is a guarantee of concentrating, deepening and understanding better”.

Doña Letizia has taken the opportunity to highlight the role played by writers, illustrators, publishers and booksellers in the last year and a half with the health crisis.

“To all of you who have managed to make us feel better during the pandemic thanks to books. To those of you who are part of the cultural book industry, thank you very much and our applause for all,” he praised.

The queen congratulated the two winners for their stories in which they extol values ​​such as diversity, oral tradition, the search for identity or “the non-negotiable need to care for and value the natural environment.”

Also due to the debt of “affection, gratitude and respect for the elderly.”

The novel “A forest in the air”, by Osés (Madrid, 1972), tells in a humorous tone the story of Borja, a 12-year-old boy who moves with his father to his grandfather’s hometown after being abandoned by his mother.

The grandfather leaves all his possessions as an inheritance on the condition that they help him reforest a mountain.

Father and son reluctantly accept the challenge at first, but it will open the doors to an experience that will make them change their minds as they coexist with nature and the townspeople.

Osés repeats in the list of honors, since he already won the El Barco de Vapor award in 2019 with the work “The letter writers”.

“Nobody’s Chest”, by Fabregat (Madrid, 1969), has as its protagonist an adopted Kenyan girl, who keeps as a souvenir of her origin a box full of objects that define her family.

Oblivious to his past, Nobody pays attention to his chest until his life turns upside down when Erika, the daughter of Ruth, his father’s partner, arrives at the house.

Celaá has remarked that reading is “celebrating life, living the lives of other people, knowing unknown worlds, learning to live together and dream better worlds”, in addition to “opening the door to knowledge.”

“Reading is an act of resistance and happiness that we enjoy at our own pace, away from the acceleration that surrounds us and that, unfortunately, often governs us,” he said.

The awards granted by the SM Foundation since 1978, endowed with 35,000 euros each, aim to encourage reading among children and young people and promote human, social, cultural or religious values ​​that contribute to a better world.

Last year’s edition, whose awards ceremony could not be held due to the pandemic, was the one that had the most contestants, with 450 works, double the number in 2019.

Crespo has assured that the pandemic has highlighted that “reading has been company and consolation” for lovers of literature and has allowed “to get out of the walls that limited reality to be free.”

“Let’s make the motto of these awards come true and, whatever happens, let’s keep reading”, wished the SM president at the beginning of the gala, which was enlivened by comedian Daniel Delacámara.