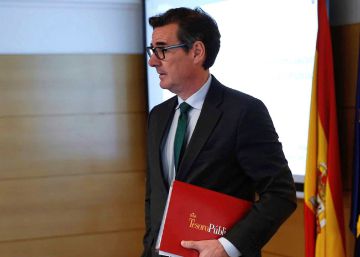 The Public Treasury expects to issue a net debt issue for this year of 32,500 million euros, 7.1% less (2,500 million) than the previous year estimate. It is a conservative strategy with respect to the 19,960 million that were issued in 2019 and maintains a cushion for possible changes in monetary policy or for possible financing needs of the State. “The strategy is continuous and we continue with a conservative forecast, “explained Carlos San Basilio, Secretary General of the Treasury and International Financing on Wednesday in the presentation of the agency’s financing strategy for 2020.

The plan carried out by the Treasury has been carried out on the basis of the Budgets carried over from 2018. Therefore, it is exposed to modifications, although San Basilio is confident that the figures will not change when the new accounts are presented. “Our desire is that this forecast be maintained once the Budgets have been approved. The net issuance is stable over the last years and provides us with budgetary stability,” said the Secretary General of the Treasury. In fact, he has indicated that he expects the forecast to remain or even be reduced, something that markets tend to receive as something positive.

This prudence in the estimate leaves the Treasury a cushion for possible financing needs. And in this sense what worries the organism is not the new Budgets, but the monetary policy and the autonomous communities. “Extrabudgetary variables are those that can cause deviations. Last year there were elements that helped make net issuance very low., but we do not know if they are going to repeat again, “insisted San Basilio. These variables that allowed reducing the financing needs were, fundamentally, the fall in interest caused by the monetary policy of the ECB and the early repayment of community debt with the State (5,273 million).

If this same context is not reproduced, the effective emission could increase again, something that has not happened since 2017. “There is a scenario of lower rates than last year and stability expectations, so we have reduced the estimate. But if these variables are not repeated and, in addition, the ECB announces a rate hike, we can reach the expected 30,000 million “, clarified St. Basil.

The new Budgets, however, will directly influence the forecast in two aspects. On the one hand, San Basilio expects them to give more certainty and confidence to investors. And, on the other, the loan given to Social Security can increase over the amount that was set in the previous accounts of the State (13,800 million). “We have a margin in this regard in case there is a rise in the amount,” said the Secretary General of the Treasury.

As for the gross issuance of public debt, this will amount to 196,504 million for this year, 6.2% less than the 2019 strategy. The Treasury expects to obtain all net financing through the issuance of medium and medium-sized instruments. long term. In addition, he has assured that he will be very active in the market in the first months of the year, when there is a high demand for fixed income and sovereign issues.

The debt issuance forecast comes in a context of reduction of the public deficit, with an adjustment path that has slowed down with respect to the objectives set with Brussels. The public debt target was set at 95.9% of GDP for 2019 and in 94.6% for this year. “These figures have to be taken with some caution and the nominal GDP of 2019 is still awaiting,” said San Basilio, who believes that last year will close over 96%, without specifying whether the forecast sent to Brussels for the Socialist Executive.

What the Secretary General of the Treasury left black on white was the commitment of the new Government to budgetary stability. “We are not going to break the commitments with Brussels, we are a country that we have managed to combine the fulfillment and the requirement of budgetary stability of Brussels with sufficient growth to create employment and solve unemployment,” he defended. Even so, it has recognized that in terms of debt reduction, unlike the private sector, public administrations still have work to do.

The Green Bond, in the second semester

Saint Basil also announced the issuance of green bonds for the second half of the year, something that will facilitate and boost other private market players. “We think of a 20-year bond with a format that is comparable to that of other sovereign green bonds. The goal is to reach 10,000 million in the coming years and to be linked to specific projects with items in the Budgets,” he said.

This bond, something that Nadia Calviño already confirmed last December, is part of the Pedro Sánchez Government’s strategy to provide financial resources to projects that benefit the environment. Something that will be certified and controlled by a third party, as explained by St. Basil.

The EU activates the mechanism to finance ERTEs that foresees 21,300 million in loans for Spain