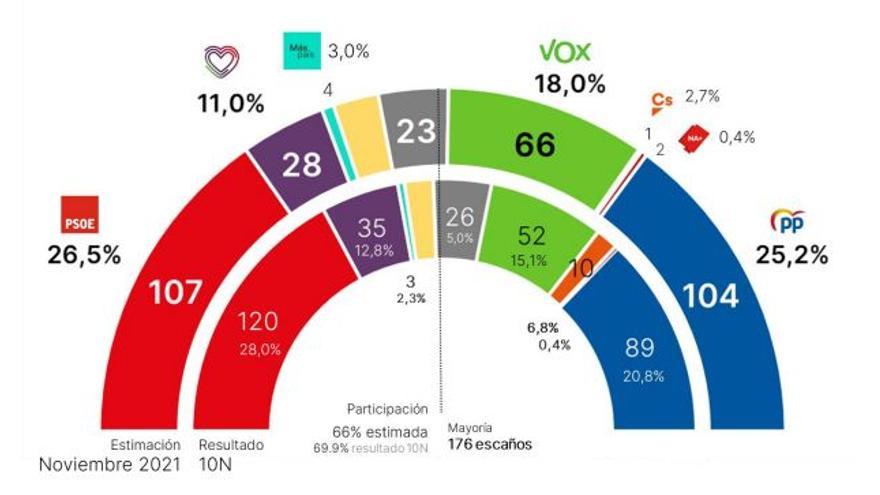 The PSOE would win the general elections, but it suffers a significant wear – it would lose thirteen seats (a point and a half in percentage of vote) – while the PP recovers and is on its heels, placing itself just one point away, according to Metroscopia. The survey, published two years after the elections of 10N, places PP and Vox -which would also grow- to six seats of the absolute majority, so a priori they would not have enough strength to govern taking into account the complexity that other political forces offered their support. However, the parties that make up the coalition lose strength with respect to their current 155 supporters and remain at 135. Yolanda Díaz improves the image of Unidos Podemos with respect to Pablo Iglesias by taking the sole leadership of the left from Pedro Sánchez, according to the company , while Santiago Abascal is the highest-rated leader in the right-wing block.

“The technical tie between the main forces, PSOE and PP, would not be registered in a similar way between the two ideological blocs that both lead. If in November 2019 the set of the parties on the left and those on the right tied in votes (but with five more seats for the one on the left), the current estimate would point to an advantage of the bloc led by the PP over the bloc led by the PSOE of almost six voting points and thirty seats. The right wing would be close to meeting the conditions to be able to set up a government majority, “Metroscopia notes, however, pointing to the fact that a third of progressive voters at this time move between indecision and abstention as an explanation for the” imbalance between the blocks “.

According to the company, Pedro Sánchez has maintained the hegemonic leadership among left-wing voters during these two years of government due to the “gradual wear” of Pablo Iglesias. However, the appearance of Yolanda Díaz “has produced a rebalancing in the leadership of the left, which at the moment does not find an equivalent reflection in the electoral support.” The president and the second vice president tie in a 67 valuation within the left bloc.

Santiago Abascal is the best-valued leader in the right-wing bloc (with 54) and is the one who has improved the most during the pandemic. Pablo Casado stays at 44 while Inés Arrimadas’s note has plummeted: from being the one with the best rating in that block to falling to 30.

Vox is also the party with the highest loyalty from its electorate (71). They are followed by the Socialists (63) and the PP (59). According to the pollster, PSOE and Unidas Podemos suffered significant wear and tear among their electors after the elections in the Community of Madrid – in which Isabel Díaz Ayuso was emphatically imposed and the Socialists were relegated to third position – and the granting of pardons . However, he points out that the PSOE has recovered slightly, but not the confederal group. “The departure of Pablo Iglesias from political life and the emergence of Yolanda Díaz’s leadership have not stopped this downward trend,” he points out. On the contrary, Pablo Casado achieved significant growth in the loyalty of his electorate, but the effect “seems to be dissipating at present.”

The data collected in the Metroscopy report is based on a total sample base of 2,400 interviews obtained through random sampling. The administration method is computer-assisted telephone (CATI) with predictive dialing. The questionnaire is structured and pre-coded. The field work was carried out between October 21 and November 4, 2021. The margin of error for the final total sample, for a confidence level of 95.5% (which is the one usually adopted) and assuming the principles of sampling Simple randomized, in the most unfavorable hypothesis of maximum indeterminacy (p = q = 50%) is ± 2.5 points for global data.