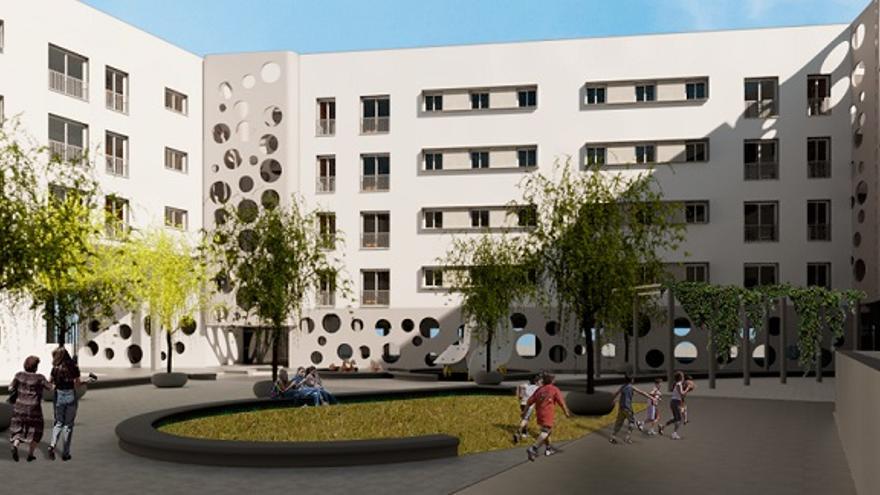 Most of the officially protected homes that are built in Spain are intended for sale and not for rent. The situation is anomalous, because after a few years the owners can sell them and they enter the free market. The Ministry of Transport itself highlighted it in its special bulletin of social housing, affirming that thus they lose “the social character with which they were promoted”.

“The vast majority of these homes responded to a single majority model of public and private development, with the intention of encouraging the construction of new work to be used for ownership. Especially during the 1980s, when more households had access to a home. protected than those who did in the free market, “the report said. “The promotion of social housing for rent has been very limited in Spain over the last four decades.”

Despite the fact that more and more people are renting, the situation has not only not improved, but has worsened in recent years. Housing construction collapsed with the crisis, as did the construction of VPO. Within this, the percentage of that destined for rent has fallen to historical lows, reaching only 3% in 2016. To see it in gross numbers: that year 6,787 homes were built in Spain with some type of protection, of which 224 went to rent.

The latest socialist proposal in the framework of the negotiations for the Housing Law includes a point to tackle this situation. The Land Law establishes minimum percentages that the autonomous communities must reserve for protected housing on their land. Specifically, when you start from a land in which there is nothing (either in the country or within the city), you must reserve 30% of homes that they are built there for official protection.

When a land is already urbanized but new houses are built on it (for example, because the old building is old and is demolished), the law is more ambiguous: it establishes a 10% minimum of VPO, but only if the City Council promotes a reform of the urbanization (a change of use, an increase in buildability …). Communities can raise these percentages.

“This leads to multiple lawsuits”, explains the architect specialized in urban planning Luis Romero. “It depends on the vision of each judge on whether it is a performance that involves that 10%.” In other words, on the land of the consolidated city – where there are already buildings and facilities – the obligation to reserve land for protected housing is less or non-existent. “The jurisprudence does not allow public housing reservations on urban land since this would fictively lower the acquired rights of the affected owners,” adds Romero.

The idea of ​​the PSOE is to establish a 50% minimum percentage for protected housing for rent within the reserve land for VPO.

That is to say: if a land goes from rural to developable and 100 homes are built there, 30 will have to go to VPO. Of those 30, 15 (50% of 30%) will have to dedicate themselves to protected rental, with a ceiling set by the administration. If the promotion is made on land that was already urban, the percentage drops: o to 5% (if 10% of the new promotion is reserved to VPO) or to 0% (if nothing is reserved).

Ábalos’ proposal, which the Ministry of Transport shared this Monday after the meeting held with its Podemos partners, does not touch the minimum land reserve percentages established by the Land Law. As the housing competitions are autonomous, each community then establishes its own. Both Madrid and Barcelona, ​​the two provinces most affected by the rent increases, have different percentages.

In Madrid, the Land Law establishes that 50% of dwellings on developable land must have public protection. With Ábalos’ proposal, 25% of the dwellings on new land would be destined for protected rental. The problem would be in the promotions within the city. Take as an example a recent case: the demolition of the Artillery Precision Workshop in Raimundo Fernández Villaverde and the subsequent construction of 450 luxury homes. The Supreme Court annulled its construction precisely because it did not reserve any housing for official protection. If the City Council had reserved 10% (45 homes), half of these (22) would have had to dedicate themselves to renting with Ábalos’ proposal.

In Barcelona, ​​the City Council approved a law to allocate 30% of new developments or comprehensive building renovations to VPO. They did so because they had no new soil left in the city, although several associations of private promoters have appealed. The council has included an idea similar to the socialist one in its proposal for the Housing Law, which they sent by letter to the minister a few weeks ago. They suggest that 75% of the reserve of urbanized land be dedicated to VPO for rent, but they also propose to increase the reserves: from 30% to 60% in new land and from 10% to 40% in urbanized land.

“It’s like Ryanair. The train comes and goes all the time, so you reduce prices”

a third of its offices are at risk of closure