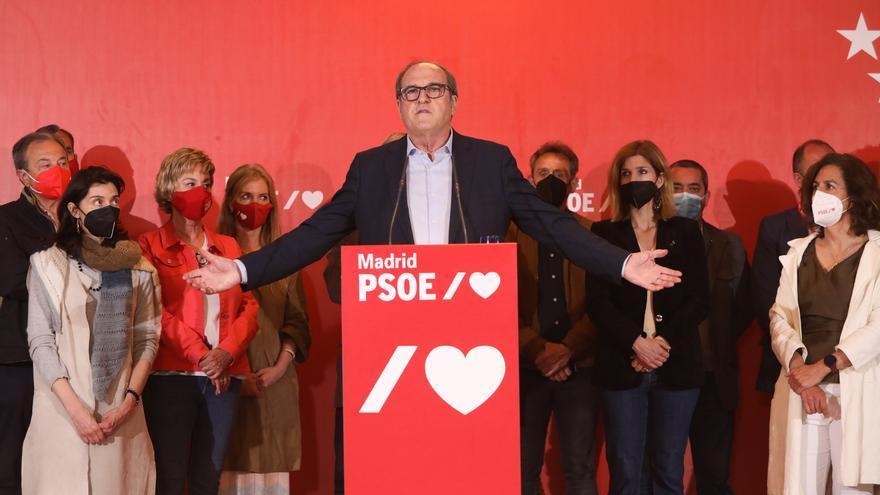 The PSOE has collapsed in the Community of Madrid. After 26 years of PP governments in the region, Ángel Gabilondo has certified the worst result in its history, losing even the leadership of the opposition. Tied at 24 in seats with Más Madrid, but Mónica García outvotes the Socialists. Expectations were not good for Pedro Sánchez’s party, which changed its strategy practically in the middle of the campaign when verifying that the Citizens ‘vote was going to the PP, but what no one in Moncloa or Ferraz had suspected is the’ sorpasso ‘. The PSOE in Madrid is facing a new crisis and an imminent renewal, according to the Secretary of Organization, José Luis Ábalos.

“We do not think that the results are good and we did not expect them,” Gabilondo acknowledged in his appearance at the end of 11 pm, in which he congratulated Ayuso for his victory: “We were confident that what we were proposing could have broken through and this obviously has not been the case, but I want to say that it remains true regardless of any outcome that public services are the best solution ”.

“Wherever we are, the queues of hunger, poverty and inequality will continue to hurt us,” added Gabilondo, thus leaving the door open on his departure. The socialist candidate has wished “success” to the future Government, which has taken for granted that it will be Ayuso with the support of Vox since he has ensured that his “model” is different. “We will analyze what happened and reflect,” said Gabilondo. One of the issues that they assume in the regional leadership and that they recognize that they will have to analyze is the transfer of vote that has occurred from the PSOE to the PP, since the Socialists lose in the main municipalities.

Gabilondo has appeared surrounded by the members of the candidacy and the general secretary of the PSOE of Madrid, José Manuel Franco, and the spokesman in the City Council, Pepu Hernández, who accompanied him in a desolate atmosphere, although they received him with applause in the room from the hotel on Calle Princesa where the PSOE in Madrid has monitored the election night. In Ferraz there was the leadership of the PSOE with Adriana Lastra, José Luis Ábalos, Carmen Calvo, Santos Cerdán and Félix Bolaños, who later moved to the hotel where the Madrid Socialists were.

Ábalos appeared immediately afterwards at the party’s federal headquarters and announced that the Madrid Socialists are entering the renewal process – the congress is scheduled for this fall. “We have two years to build the progressive alternative that Madrid needs, we will know how to take advantage of it and we start doing it from this very moment,” the Organization secretary has warned. Sánchez made a tailor-made list precisely thinking about the candidacy of 2023 and his closest team admit that there is a shortlist to select from there the future of the PSOE of Madrid, which is entering its umpteenth crisis, although this is the most serious at the lose the leadership of the opposition.

At the moment the PSOE has summoned its governing bodies this Thursday.

The 4M is the first major electoral setback that Sánchez’s PSOE has suffered since he is in Moncloa -in the Andalusians it was attributed to Susana Díaz and the Socialists won in the generals, and the reading of the Basque and Galician women has a different component- . Isabel Díaz Ayuso, who has become the main opponent of Sánchez from an autonomous government during the pandemic, has devastated. And the debacle is greater than predicted in both Moncloa and Ferraz. On this occasion, the president went from hand to hand with Ayuso to significantly reduce his presence in the campaign – with only three rallies – and to ignore the PP candidate.

Despite the fear of a change in the electoral cycle in the socialist ranks – and which Ayuso and Pablo Casado have directly pointed out in their celebration of victory – that it may have repercussions in other elections, such as in Andalusia, which in principle the next to be held, the socialist leadership strives to remove the defeat in the Community of Madrid from the national sphere. They argue in Ferraz that this region is not comparable to the rest of Spain.

The explanation of the hecatomb is multifactorial in Sánchez’s headquarters. On the one hand, in the socialist ranks they consider that a good campaign has not been carried out because it began by looking at the center to try to get part of the Citizens’ vote without success with a speech away from the left by stating that taxation would not be touched in the most uneven region. And after he gave a “lurch” when he opened his arms to Pablo Iglesias, to whom Gabilondo closed the door while still being vice president of the Sánchez Government.

The campaign experienced a turning point as a result of the death threats received by various members of the Government and Pablo Iglesias and the Socialists took the opportunity to place the framework in the dilemma “democracy or fascism” that they consider to mobilize the progressive electorate more. They also focused on traditional socialist voting fiefdoms confident that a large turnout was the only way to wrest power from the right, but a record of mobilization has not made this possible either.

But the figure of Gabilondo and the Madrid federation are also in focus. The candidate who was on two occasions about to conquer Puerta del Sol has also led the PSOE to its worst result. In the socialist ranks the opposition work of Gabilondo was in question, with a very moderate and calm profile. In addition, he was leaving with a clear destination: the Ombudsman.

Ferraz has already made it clear that he has one of his weaknesses in the Madrid federation after the hecatomb of May 4 and will undertake a renewal soon. “The party in Madrid is a disaster”, recognize several socialist interlocutors of different ranks. “The PSOE of Madrid has a very damaged structure”, they say in the Gabilondo team, in which they admit that Más Madrid is a “young competitor” who has “known how to move”.