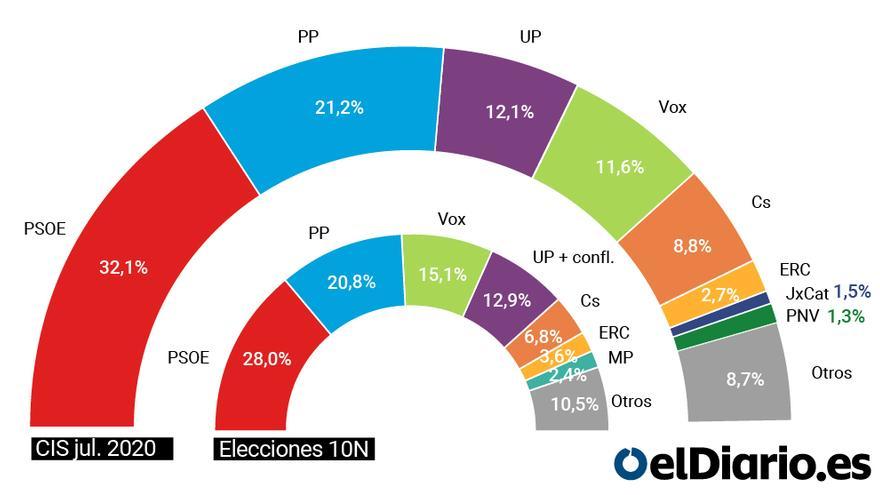 Coalition Government parties resist the crisis of the COVID-19 pandemic. It is one of the conclusions of the barometer of the Center for Sociological Research (CIS) corresponding to the month of July, which keeps socialists in first position with 32.1% of the votes with an advantage of almost eleven points over the PP, which It grew slightly to 21.2% at the cost of the drop in Vox (11.6%) and Ciudadanos (8.8%), which continues to drop compared to previous surveys. Unidas Podemos regains third position with 12.1% of the votes.

The PSOE grew a few tenths compared to the previous month’s survey and almost four points compared to the elections on November 10. According to the demoscopic institute led by José Félix Tezanos, the coronavirus crisis not only does not take its toll on the main government party, but also strengthens it. The Pablo Iglesias coalition is also growing slightly – seven tenths compared to the June poll – and would obtain a result similar to that of the last generals, taking third position from the extreme right.

Santiago Abascal’s party falls nine tenths from the month of June, but loses almost four points with respect to the result it obtained at the polls. For its part, Inés Arrimadas remains above the result of Albert Ribera on 10N, when it sank to 6.79% of the votes; but experiences a drop from previous barometers. In May, when Ciudadanos changed its strategy and reached agreements with the Government to extend the state of alarm, the CIS came to give it a vote estimate of 10.5%. The fall of both formations pays off for Pablo Casado’s party, which goes from 20% of the votes to 21.2%.

The CIS survey was carried out between July 1 and 9, that is, in the midst of the Basque and Galician elections campaign and when the state of alarm had ended and the “new normality” was prevailing in the whole of Spanish territory.

Pedro Sánchez remains as the best rated national leader with a 4.9 average mark, followed by Inés Arrimadas, who gets a 4.1. The head of the opposition, Pablo Casado, ties with the second vice president, Pablo Iglesias, with a 3.6. And the worst rated is Santiago Abascal with a 2.5.

In the case of coronavirus management, the president comes out even better with an approved scraping – something unusual in barometers where politicians often suspend. The CIS asks on this occasion the assessment of the leaders based on what they are “saying or doing” in relation to COVID-19. Sánchez gets a 5.1 average mark. Again Arrimadas is the next best rated, although it drops to 3.9. Iglesias followed, with a 3.7, and Casado, with a 3.5. The far-right leader is again the worst rated at 2.5.

Regarding the situation due to the coronavirus, 62.3% of those surveyed considered that more restrictive measures should be taken. Only a third of those asked (32.7%) bet on maintaining the measures that already exist. The survey was carried out when the first outbreaks began in places such as A Mariña (Lugo), Ordizia (Euskadi) or Lleida.

An overwhelming majority, 88.9% of those surveyed, are committed to carrying out reforms in Spanish healthcare after the coronavirus crisis. The main requirement is an increase in resources for healthcare, but also a reinforcement of staff in healthcare centers. 55% of the respondents who have had to go to health services for symptoms of the disease value the care they received in a good way, and another 30% very well. Only one in ten understands that they have had bad or very bad care.