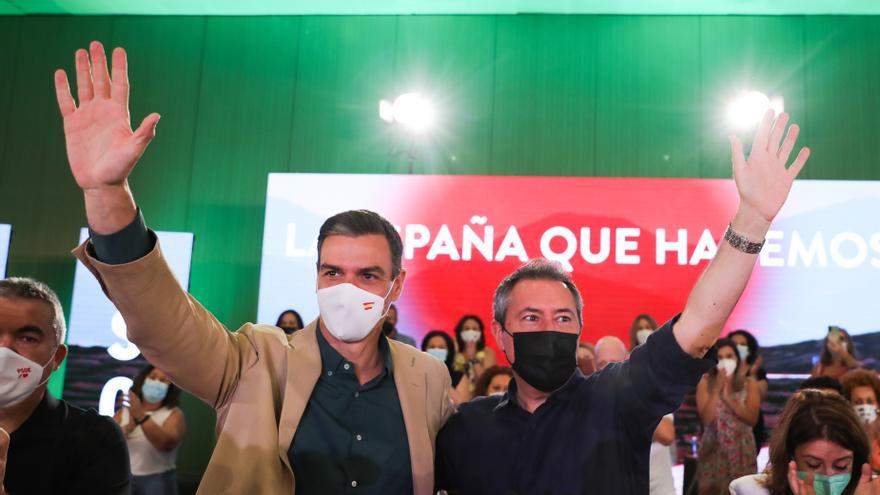 Once Pedro Sánchez has been acclaimed, the PSOE continues the processes of renewal of its territorial leadership. The regional presidents are being revalidated in the General Secretariats by acclamation, and Concha Andreu joins that club ending bicephaly in La Rioja. In addition to this new face at an organic level, five federations that are in the opposition change their leaders, to which must be added Salvador Illa, who in December will formally replace Miquel Iceta as head of the PSC. This is the new map of socialist leadership.

Guillermo Fernández Vara and María Chivite were re-elected as leaders in Extremadura and Navarra in two congresses held last weekend, and Emiliano García-Page in Castilla-La Mancha did the same this Saturday. The rest of the presidents, Ximo Puig (Valencian Community), Javier Lambán (Aragon), Francina Armengol (Balearic Islands), Adrián Barbón (Asturias), and Ángel Víctor Torres (Canary Islands) will be in the near future. In the case of La Rioja, the regional president, Concha Andreu, is inaugurated as general secretary. Until now, the regional leader was Paco Ocón, whom Andreu expelled from the government a few months ago. After measuring his forces, Ocón resigned to appear to revalidate the position and his next destination will be the Senate, according to sources from the Socialist leadership.

In Euskadi, where the PSE govern together with the PNV, Eneko Andueza has taken over the reins of the party after the resignation of Idoia Mendia before her entry into the Basque Executive as vice-lehendakari. Andueza, favorite of the leadership and spokesman in Parliament, has been imposed with 95.3% of the votes in the primaries that have been held this Saturday and which were also attended by the councilor in Basauri Soraya Morla, one of the members of the support platforms for Sánchez that constituted the socialist bases in the war four years ago.

In the case of Cantabria, where the Socialists are part of the Executive of Miguel Ángel Revilla, the vice president, Pablo Zuloaga, will have to face Judith Pérez, an exporter in Santander, on November 14, after he achieved the necessary guarantees -whose threshold is very low for four years and will rise in the future from 2% to 6% -. Zuloaga does not convince part of the party, but no one with weight has taken the step to stand up to him, so the federation assumes that he will revalidate his position.

In most of the territories in which the PSOE is in opposition there are changes in the leadership, with the exception of Castilla y León, where Luis Tudanca will repeat as secretary general.

The main battle was in Andalusia, where Ferraz chose to advance the primaries to get rid of Susana Díaz as soon as possible. Juan Espadas is now de facto the secretary general, at the expense of configuring his leadership, and his leadership is not yet consolidated as the fights in the provinces show. There, the remains of the susanism may tip the scales at the poor relationship of the sanchismo. Espadas is aware that he will have to sweat his shirt to gain control. The main battles are expected in Cádiz, Seville, Huelva, Malaga and Jaén, informs Dani Cela.

There were also primaries in Madrid, where the regional deputy Juan Lobato, Ferraz’s favorite, won with more than 60% of the votes the mayor of Fuenlabrada, Javier Ayala, last week. Lobato takes the reins of the always convulsed Madrid PSOE at a time when it faces its worst crisis after losing the leadership of the left in the May 4 elections that took away José Manuel Franco and also Ángel Gabilondo, that already before the electoral advance he was on the way out waiting for the agreement with the PP to make him Ombudsman.

The battle in the PSdeG has been dog’s face, where the president of the Provincial Council of A Coruña, Valentín Formoso, took the step to dispute the leadership of Gonzalo Caballero, who tried to advance the primaries to reduce the possibilities of alternative candidacies, but Ferraz short-circuited his attempt. Formoso complied and prevailed this Saturday in the internal elections, so the Galician socialists will now have a new leader.

In the Region of Murcia there will be a new secretary general after the surprising resignation of Diego Conesa just four years after taking office. The primaries will be next November 20 and the current government delegate, Pepe Vélez, who was part of Sánchez’s leadership until the 40th Congress, and Senator Lourdes Retuerto will compete.

With this change of faces, to which is added that of Ceuta -where the PSOE will be piloted by Juan Gutiérrez- the Socialists put an end to their stage of territorial renewal to begin to grease the machinery for the regional and municipal elections of 2023 in a time when the polls are adverse to them but Sánchez is confident that the economic recovery will row in his favor.