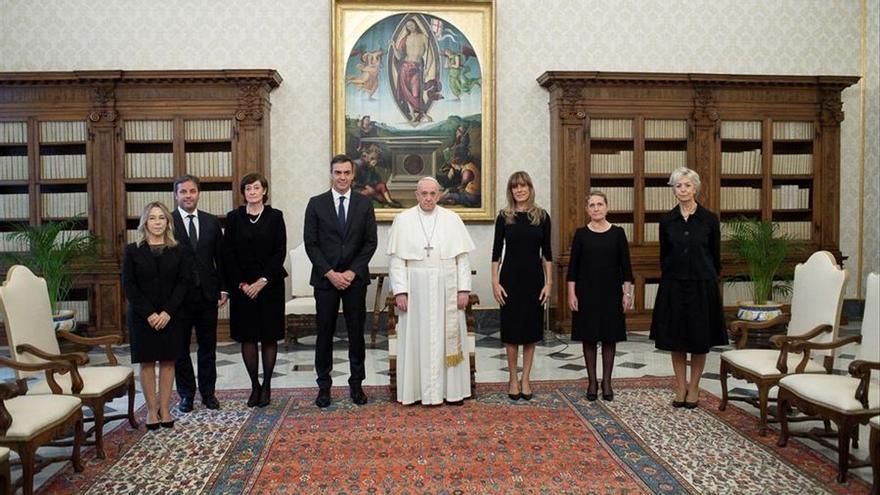 There are recurring debates in the PSOE congresses such as the State model - there is always an amendment in favor of the republic that is transacted at dawn - and another of the always controversial is the relationship between Church and State. José Luis Rodríguez Zapatero was the first to propose the repeal of the agreements with the Holy See, Alfredo Pérez Rubalcaba repeated the commitment and, later, Pedro Sánchez did it in the two primary campaigns for the leadership of the PSOE. The presentation of the 40th Congress that the party will hold in mid-October - which will now undergo a process of amendments by the militants - includes that proposal again, but this time includes that the process will be done with "dialogue" and "consensus. " of the church.

"It is time to update some agreements that are more than 40 years old, some prior to the Constitution - the text on the Concordat indicates -. This revision, which in terms of International Law is called" denunciation ", we would take it to carried out in dialogue with the Church, seeking consensus and promoting from the Government new agreements with the Vatican typical of our time, within the framework of the values ​​and principles of constitutional democracy and from the mutual respect and adequate distinction between the State and the Church, beneficial to both ".

Ferraz includes on this occasion the prevention that the review will take place at the hands of the Catholic Church, which did not appear in the final resolution of the previous congress, in which Sánchez recovered the general secretariat under the slogan "We are the left." Four years ago, they affirmed that "the secular condition of the State requires the repeal of norms and agreements establishing privileges inherited from the past." "For this reason, it is necessary to denounce the four Agreements signed between Spain and the Holy See in 1979, which gave continuity to the Concordat established in 1953 between the Franco regime and the Holy See," concluded the document, which referred to " establishment of the self-financing of the Church, the secularization of ceremonies and signs and the neutrality of all institutions, services and public servants with respect to the ideological and religious convictions of the citizens ".

The PSOE did not include the denunciation of the agreements with the Vatican in the electoral program of the generals of April 2019, although he assured in a interview in elDiario.es at the gates of the electoral repetition of November of that year that the PSOE "always" has raised. "We are a political party that has always defended secularism. I believe that also in this area we have to take steps," he stated. The socialists they included that commitment to denounce the agreements and promote "a new bilateral agreement between both States, based on the principle of secularism, to maintain modern cooperative relations with the Catholic Church."

Socialist sources emphasize the importance that this promise to renegotiate the agreements with the Vatican is linked to the approval of a Law on Freedom of Conscience, Religion and Convictions, which is a commitment of the coalition government in its programmatic agreement for the "advance "towards secularism. However, it was also included in the 2017 resolutions along with the commitment to promote a "Law of Conscience and Religious Freedom that ensures non-discrimination between believers and non-believers of certain religions."

This law, which will be the responsibility of the new Minister of the Presidency, Relations with the Courts and Democratic Memory, Félix Bolaños, intends to promote "the development of different options for private, religious, moral or philosophical ethics for all people" as well as guaranteeing "the freedom of worship, the neutrality of the State, the adequate separation of public ethics and private ethics, and religious and philosophical pluralism ".

The PSOE also reaffirms for its 40th Congress the commitment acquired from the Government to review the so-called crimes of opinion to avoid situations such as that of rapper Pablo Hasel, convicted of extolling terrorism in his lyrics and some tweets. After his entry into prison, the Government assured that it would reform the Penal Code to end the prison sentences for this type of crime and Unidos Podemos registered a bill in Congress.

"Some recent episodes have shown the need to modify our Penal Code to guarantee that an opinion and, above all, an artistic expression, however critical or scathing, does not carry a prison sentence. Only those expressions that incite violence, imply a real threat against people or institutions, or undermine the dignity of especially vulnerable groups, "the PSOE report includes.

The Ministry of Justice has long been working on a comprehensive reform of criminal legislation in which, among other things, it wants to address animal abuse. In this sense, the Socialists consider that there is "a long way to go to eliminate practices that cause unnecessary pain out of economic interest or mere cruelty." "That is why we are committed to reforming the Penal Code to impose an adequate punishment for malpractice in animal experimentation, even going as far as closing the facilities or dissolving the companies responsible for it," reads the document. It also intends that the Prosecutor's Office for the Environment and Urbanism Chamber also includes Animal Protection.

The Socialists also include in their presentation a proposal in which the government department of Public Function was working to articulate a system of scholarships for the preparation of opposition for the high bodies of the State, such as the judiciary, or the General Administration of the State. "It is necessary to guarantee that young university students, who do not have the necessary resources, can apply for positions of high civil servants by means of the articulation of a program of aid", appears in the document, as it has advanced the Cadena SER.

That idea slipped four years ago when the socialists claimed that "the modernization of the justice system necessarily also involves guaranteeing the democratization of the judicial career." "We must guarantee that no one is left out of the judicial career due to lack of resources," they promised in their 39th Congress resolutions. Also in the political conference that Rubalcaba promoted in 2013 they bet on the "updating of the selection process of Judges and Prosecutors, as well as of Court Clerks, with a shorter overall preparation time and with new forms of evaluation of legal techniques and skills and psychotechnical not strictly rote ". "An access system will be facilitated through scholarships and grants that enable the preparation of oppositions to jurists who, with a proven academic record, cannot pay for their training to pass the selective tests," said the document of which a very young Sánchez he was one of the coordinators.

The PSOE also recovers the old idea of ​​eliminating the assessment for deputies and senators, which requires a constitutional reform. Likewise, it briefly includes the intention of "deepening the transparency and accountability of all State institutions, including the Royal House," although it does not specify how and limits itself to saying that "It coincides with the will expressed by the Head of State". The monarchy is one of the most opaque institutions in Spain, with dozens of millionaire budget items outside their allocation in the General State Budgets.

The PSOE, which intends to include the concepts of feminist and ecologist party in its definition in the statutes, includes the concept "cities in 15 minutes" in the green transition section. The idea that he defends is to implement "sustainable city and territory models linked to people's health and well-being, it is a claim that permeates all levels of governance and management."

"This commitment means building healthy and livable cities based on sustainable mobility as an urban transforming axis, it implies urban regeneration in deteriorated areas, the promotion of sustainable urban solutions based on nature, and the treatment of public space as a space of equity in the that equal opportunities materialize, "says the document coordinated by the Madrid spokeswoman, Hana Jalloul, and the MEP Lina Gálvez. "We are preparing to promote accessible green cities in 15 minutes, which respond to the key objective of making cities more livable, so that basic services such as work, health, shops, culture and leisure are less than 15 minutes from home, walking or cycling, "concludes the document that thus incorporates what was one of the star promises of the mayor of Paris, Anne Hidalgo, with whom Sánchez maintains an excellent relationship.