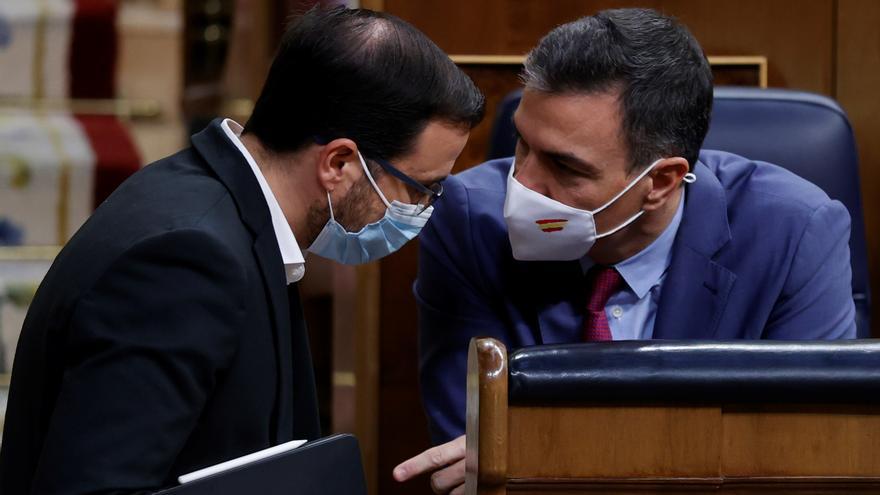 In political communication it is often said that in an electoral campaign whoever imposes the framework wins. That the story or narration responds to the truth of the facts and the data is the least important thing. It is already known that in current politics lying is on the rise, manipulation is a common work tool and the ethical bar is lowered at lightning speed. The right never had too many objections, but since Abascal's men reduced the space they have decided to redouble the production of their machine of lies. And hence the controversy over the minister's statements Garzón in the British newspaper The Guardian in an interview conducted on December 14, published two days after Christmas Eve and recovered by the PP of Castilla y León on January 3 with the purpose of building a framework for the electoral campaign that divert the focus of the judicial cases opened against the Board for different cases of corruption.

What Alfonso Fernández Mañueco did not count on is that the socialist sector of the Government of Spain would take the bait, turn its back on Garzón and find itself trapped in a fallacious narrative that has dominated the scene and the political-media debate for almost two weeks : that if the minister had attacked a sector that exports more than 12,000 million euros a year and employs more than half a million workers; that if he had reviled the quality of our meat; whether Sánchez should remove him immediately; that if the dilemma before the regional elections of 13-F was "livestock or communism"...

“Probably, we have not done well. We should have defended the minister's words, although it is true that in an electoral campaign it is necessary not to have to spend time explaining the statements that one makes", admit socialist sources who, in any case, regret "having given away ten days of pre-campaign electoral” to a PP, which not only wants to divert attention from corruption in the region but also from the fact that, except for an absolute majority that is not expected, it will need VOX to continue as head of the Board and this time yes, the extreme right will demand to enter the government.

He dissolved the Cortes with a lie [que se estaba fraguando una moción de censura contra él] and it has entered the campaign with another lie, a supposed division within the Government around the macro-farms and the quality of Spanish meat, ”says a socialist minister.

In La Moncloa they share that when they read Alberto Garzón's interview in The Guardian on December 26, which was included in the weekly media plan, they detected some phrases "that could cause some controversy", since they included a certain dose of memory to a previous controversy when Garzón warned of the need to reduce meat consumption and Sánchez's firm response in favor of a good steak. They also recall that the minister himself "spoke in the text about the disparity of criteria that always exists in a coalition government" and that "he expressed his opinion", although they never imagined the volume that the dispute reached two weeks later. .

Hence, when Mañueco opened fire with a manipulated version of Garzón's words, the Monclovite strategists decided that the spokesperson and education ministers should come out and say that It was a "personal opinion" of the minister, “as he himself underlined in the text in question”. The debate was not, as Mañueco put it with the help of some press, about macro-farms yes or no, "but about legal or illegal farms", they add from La Moncloa, where they continue to believe in any case that the allusion to meat of worse quality It was "untimely and unfortunate." And "disproportionate", they add, the declarations of the socialist presidents of Aragon Y Castilla la Mancha in this regard, that they were the first to assume the framework of the Castilian-Leonese right.

Garzón toured various media last week to denounce a flagrant manipulation of words and at the same time vindicate extensive farms against large polluting industries, a debate that is also taking place in the EU and that has motivated different government legislation and several autonomous communities. In any case, he did not feel supported by the president when in an interview on Cadena Ser last Monday, Sánchez declared that he was very sorry for "the controversy" and spoke of the extraordinary quality of Spanish meat.

Garzón then redoubled his presence on radio, newspapers and television -with a media plan designed by his team and not in La Moncloa- in defense of a model of sustainable development and to counteract the lack of support from his colleagues on the Council of Ministers. La Moncloa, seeing that the head of Consumption widened the space in which to project his position, decided that the Minister of Agriculture, Luis Planas, an indisputable reference in Europe and recognized solvency in the sector, also came out to explain the position of the government and to focus the debate on three different media.

All this happened between Monday and Wednesday. On Thursday morning, upon verifying that Garzón was maintaining his media "road show" and had included four more interviews for Friday and the weekend, the Monclovite strategists, not Sánchez, called the minister's attention to the need for lower the decibels and thus stop a media loop that mainly benefited the right and Mañueco's campaign.

None of all this, confirm government sources, has been the subject of any conversation between Sánchez and Garzón, and neither between the president and the second vice president, Yolanda Díaz, who limited herself to saying about all this that the coalition had to take care of itself a little morewithout entering into further disputes. The ministers Ione Belarra and Irene Montero have not entered into the controversy, beyond a retweet of the account of the spokesperson in the United We Can Congress, Pablo Echenique, about "the Garzón hoax and the macro-farms", which in the opinion of the socialist side reveals that the issue has not caused the alleged crisis in the coalition that the right-wing media is talking about, nor has it been the subject of internal debate, but rather an issue “that the Minister of Consumption has led on his own in search of his own space ”. The one who has been especially critical of Sánchez and the PSOE in this matter has been Pablo Iglesias, which in Moncloa they understand as an attempt by the former leader of the formation to “mark the way for Yolanda Díaz”.

Whether it is true or not, what they are clear about in Moncloa is that there will be no more interviews on either side of the coalition to "feed a false story from the right" and that the slogan of lowering the decibels has been assumed by all the members of the Council of Ministers, who in the coming weeks intend to mark the agenda with social matters and data on economic recovery. This, in addition to denouncing the umpteenth attempt by the PP to delegitimize the distribution of European funds that began with the appeal of the Madrid president before the Supreme Court and some replicas in other autonomies governed by the right, in line with Casado's trips to Brussels to question Sánchez's management of them.