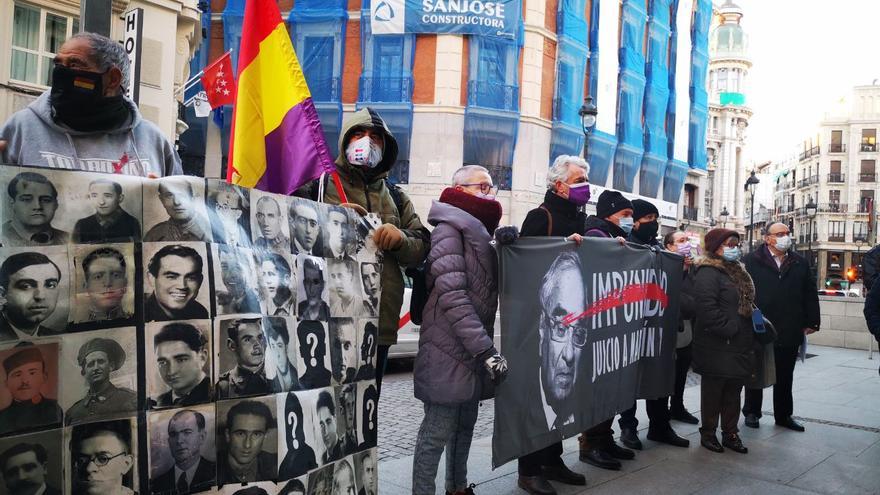 The Plenary Session of Congress will reject this Tuesday, with the PSOE, PP, Vox and Ciudadanos voting against, taking into consideration a proposal from the CUP, to which the rest of the nationalist and independentist forces joined, which sought to reform the Criminal Code to be able to judge Francoist crimes based on international law, considering them crimes of genocide or crimes against humanity.

The text, which has not received sufficient support and, therefore, concludes its parliamentary process today, stated that it could not prevent "the trial or conviction of acts or omissions that, at the time of their commission, constituted, according to the law recognized by the nations that make up the international community”, those crimes of genocide or crimes against humanity. According to its proponents, the regulations sought to "legally reinforce the principle of legality from the perspective of International Human Rights Law."

The new norm has had the support of United We Can, the minority partner of the Government coalition, and the usual allies of the Executive, such as ERC, PNV, EH Bildu or Compromís, in addition to the CUP itself, Junts and the BNG . But the PSOE has rejected it arguing that the text "violates" the "principles" of "criminal legality, non-retroactivity and legal certainty", as explained during the plenary session on Tuesday by the socialist deputy Indalecio Gutiérrez.

"This bill aims to establish an exception to the principle of retroactivity of criminal laws," he denounced, thus arguing the reasons for not supporting it. Gutiérrez, however, wanted to emphasize that "no one can doubt the commitment" of the PSOE "with the victims of Francoism" recalling that former President José Luis Rodríguez Zapatero approved the first Historical Memory Law several decades ago and that the current Government of Pedro Sánchez has promoted a Democratic Memory Law "whose object is the recognition of those who suffered violence" in the Civil War and the dictatorship.

“No lessons for the PSOE. No one has more deaths in mass graves and in gutters than the PSOE and UGT”, said the socialist deputy, who has asked the rest of the chamber for the aforementioned Democratic Memory law, which is paralyzed in Congress in part by the discrepancies of the socialists with their parliamentary partners.

Botran: “Memory is not revenge”

During the defense of the initiative, the deputy of the CUP Albert Botran has assured that "memory is not revenge", but "a right to the identity of people, to see the legitimacy of a trajectory of struggle recognized and is an ingredient for the future, key to guarantees of non-repetition”. As he explained, the "possibility of resorting to international law" to prosecute the crimes of Francoism is due to the fact that it is based "on the consideration of Francoist violence as a crime against humanity", for which they are "imprescriptible and non-amnestiable" .

Botran has also considered it a "paradox" that "they want to prosecute crimes in Ukraine and not a single trial of Francoist criminals has been held" in Spain.

Along the same lines, other pro-independence groups with a presence in Congress have manifested themselves. Bel Pozueta, from EH Bildu, has assured that the proposal sought to "support the right to truth, justice and reparation" for crimes "committed during the Civil War and the Franco regime", because "the changes would represent an important advance to put an end to to impunity”. "Spain has not investigated and does not investigate the crimes under international law committed during the Franco regime", she has denounced, mentioning the different international organizations such as Amnesty International, which have urged the State to investigate them.

“This is about resolving a case of justice and we will vote in favor,” Aitor Esteban, from the PNV, limited himself to pointing out, while the BNG spokesman, Néstor Rego, recalled that the victims “have been waiting more than 80 years for justice to be done,” something that, according to him, "the regime of the Constitution denied." “It is urgent to act. We owe it to the victims and to democratic decency”, he concluded.

An initiative promoted by CEAQUA

The ERC deputy Carolina Telechea has assured, for her part, that the one being debated this afternoon in Congress was an initiative "of the memorialist movement". In fact, members of the State Coordinator for Support of the Argentinian Complaint (CEAQUA) were present in the hemicycle, who have promoted the investigation of Francoism in the South American country and who have spent years trying to get the matter into the hands of the Spanish courts.

PP, Vox and Ciudadanos have also come out against the initiative, using in their arguments allusions to ETA or "dictatorships" such as that of Venezuela or Cuba with which they have linked the left and the proposing forces.