The PSOE and the PP are capitalizing on the management of the health, economic and social crisis produced by the coronavirus pandemic. The Celeste-Tel barometer carried out at the end of July for elDiario.es places those of Pedro Sánchez above the result of the elections on November 10, with 28.7% of the vote and 121 deputies. The Socialists would have added 1.7 points and eight seats in almost two months, if it is compared with the survey conducted in early June. The PP, for its part, also adds support. Pablo Casado maintains the upward trend that began in April and would reach 24.4% of the votes and 101 deputies, according to the survey. The other large state parties, Vox, United We Can and Citizens, would be the cross of the study and they would lose vote and representation. The rest of the formations with a parliamentary presence remain stable.

These are the main conclusions of the Celeste-Tel barometer carried out between July 27 and 31, which reflects that, if elections are held now, the forces between the blocks would remain similar to how they are right now. The 12 more seats that the PP would achieve would be partially offset by a fall in Vox, which has been down for four months. The party led by Santiago Abascal would obtain 14.6% of the vote and 47 deputies. They are six tenths less than a month ago, which means they lose five deputies also compared to November. The announcement that the far-right party will present a motion of no confidence coincided with the fieldwork of the poll. Ciudadanos suffers a hit when falling to 5.3% and obtaining seven seats. A month ago, he recovered the November numbers and even pointed to the 11 deputies, one more of those achieved on 10N.

Neither are things looking good for United We Can, which has three Celeste-Tel barometers on the decline. The sum of the state, Catalan and Galician candidates gives an 11.9% vote estimate and 29 deputies, compared to 35 in November. Those of Pablo Iglesias are left five tenths and four deputies under the United We Can brand, while En Comú Podem loses two tenths (one deputy) and Galicia en Común falls to 0.4% and would only obtain one representative.

The deputy who leaves United We Can in Galicia would be won by the BNG, which goes from 0.5% of the 10N to 0.9%, going from one to two seats. It is the only change that occurs in the bandwagon of the smaller nationalist, regionalist and state parties. The rest, with slight variations in the voting projection, would obtain the same number of seats as in November.

Thus, the parties on the left would suffer a slight decline of 0.8 points, and the right, an overall advance of 1.2 points. Neither bloc would get the numbers for an investiture on their own and would need outside support. In this sense, the investiture bloc would have it easier because, although the abstention of ERC and EH Bildu would not be enough this time, with the express support of the Catalan Republicans Sánchez would once again be president. Married, however, I would get no more Yes it is than It is not in no case, unless an exceptional event occurred such as the abstention in October 2016, which split the PSOE in two.

Investiture figures, according to Celeste-Tel

Number of seats that would currently obtain the block of “yes”, “no” and abstention in the investiture, according to Celeste-Tel 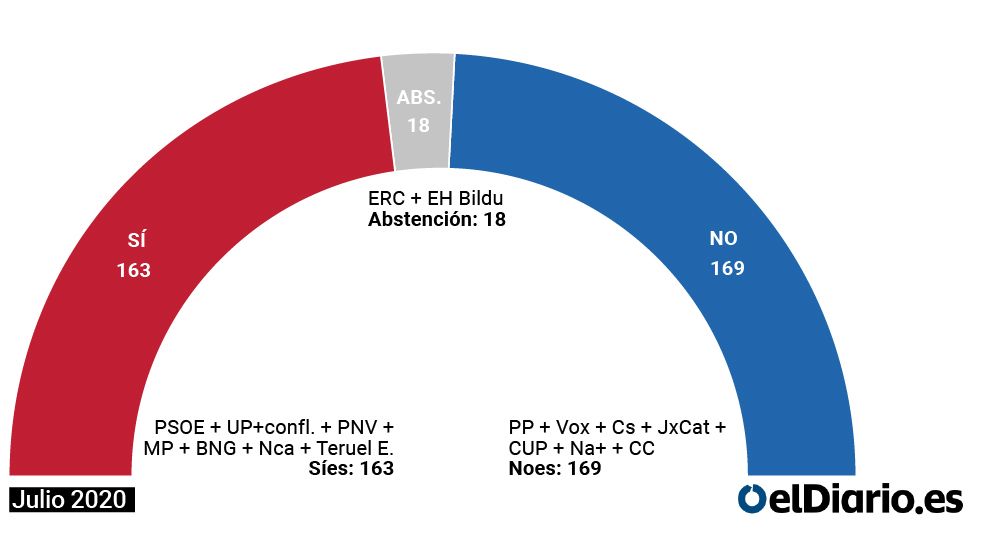 The electoral adjustment takes place within the right-wing bloc, where the PP grows weakening Vox and Ciudadanos. The party led by Inés Arrimadas after the Albert Rivera debacle on 10N is unable to retain its electorate. According to Celeste-Tel’s July barometer, only 58.9% of voters would choose to repeat their vote if elections were held now. 27% of its voters in November would go to the PP, 5.8% to abstention, 4.3% to Vox and another 4% to the PSOE. Married, with a 94.4% loyalty, he would also recover 9.8% of the Vox vote on 10N.

On the other side of the board, it is the PSOE who achieves the best loyalty data, with 92.6%. United We can reduce it to 85.1%. Those of Pablo Iglesias would send 6% of their vote in November to the PSOE, 4.8% to other minor parties and 4% to abstention.

That voting fidelity in the traditional parties pushed the bipartisanship to its best results since November, with 53.1% of the vote.

Abstention also falls. The participation predicted by the survey is 64.1% of the census, still two points below that which actually took place in the November 10 elections.

VIDEO | Illa: "We recommend that the restrictions be extended to areas with an incidence greater than 500"

The president of the Constitutional Court will not attend the act of handing over the dispatches to the judges of Barcelona, ​​alleging scheduling problems