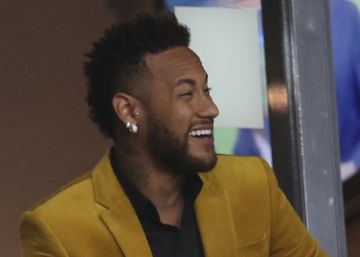 Paris Saint-Germain has got into the trap of Neymar Junior. On the verge of completing two years promoting the figure of the star above the discipline of the team, the Qatari owners of the richest club in France have resolved to change the strategy completely and transfer to the symbol of their project without further delay. Sources of PSG administration admit that this lurch, topped by a communication policy governed more by pride than by calculation, places the club in a position of extreme negotiating weakness. The scenario that opens before President Al-Khelaifi is so complex that until yesterday Neymar refused to return from Brazil, precipitating a picture of devaluation that gets worse every day that passes without the offices of Boulogne having news of any concrete offer by the soccer player. Put to make projections, this week the managers of the club calculated that if they do not manage to close the transfer in the last week of August, would be willing to reduce the sale to 150 million euros. 67% of the 222 million paid to Barça in 2017 as a rescission clause.

The interview that Nasser Al-Khelaifi granted to France Football in mid-June, where he praised the figure of Kylian Mbappé, 20, and opened the doors to exit Neymar, 27, in the middle of a strong philippy, put the first stone in the mountain of excuses that gathers the player to demand his departure without facilitating a negotiation. The PSG had known for days that Neymar would not appear at the start of the preseason, scheduled for last Monday. When in June the leaders contacted the player he warned them directly that he did not want to wear the PSG jersey again. Interrogated by a high position, the father of the player offered two fundamental arguments. First, that his son is hurt by the manifest commitment of Al-Khelaifi to place Mbappé as the pillar of the project; second, that this contempt contrasts with the value that Messi gives him – "the best player in history", according to the father – who in telephone conversations with his son has been firm in his commitment to help him return to Barcelona in a big way. The father says that if Neymar returns to Barça, Messi has promised to do everything in his power to win the Golden Ball.

Neymar father, main protagonist of the management of the race of the star, warns the PSG that his offspring has a moral debt to Messi who is willing to settle with professionalism and delivery that he did not show to his ungrateful Qatari patrons. In order to evoke grievances, the patriarch indicated to the envoy of the club that he does not forget that Al-Khelaifi declared in an interview that Mbappé is the best signing in history. Neymar, protests the father, has been pushed into the background to favor Mbappé, idol of France after the conquest of the World Cup in 2018.

In his last public appearance before leaving France, a month and a half ago, Neymar already pointed to his partner after the Cup final lost to Rennes. Without mentioning names, everyone involved understood that the addressee was Mbappé. "I see many young players who are not exactly lost, but they lack more ear than mouth," said the Brazilian. "They should listen more than they speak. Sometimes a more experienced man speaks and they respond. This is not how a team goes far. "

Alarmed by the panorama of wear and tear, now PSG employees are trying to convince the father to at least take his son out of the Mangaratiba mansion where he is being detained for installation in Paris this week. Even if it's to visit the Louvre. They will not force him, they say, to train with the team and will facilitate the transfer to Barça if he wants that to be his destiny. Thus, they explain, they will avoid that the rebellion of the soccer player erodes still more the position of the club that assured to him 47 million annual net by all the concepts consenting him, in addition, to lead a life of idleness that did not resemble at all to the rigor that they imposed to the rest of the template.

Al-Khelaifi tries not to offer directly to Neymar but has sent intermediary agents to travel to Europe. They say in the PSG that, asked for their interest, a top leader of Real Madrid replied to the unofficial envoy that they will not try the signing since they are certain that Neymar – who has rejected three offers from Madrid since 2012 – wants to sign for the Barça

Barcelona, ​​according to sources of the French club, is the only institution that has addressed directly to PSG, through "a third-row official", they say, to ask about the situation of the player. Based on this, the sports management of PSG, led by Leonardo de Araújo, designs a plan if they receive an offer from the Camp Nou. They will begin by placing a negotiating floor of 180 million euros in cash and, if necessary, will accept footballers in payment. The sports management has informed Al-Khelaifi of the interest for four elements of the Catalan team: Dembelé, Coutinho, Rakitic and Umtiti.

Attentive to suggest alternatives that fill the gap that would leave the Brazilian, Thomas Tuchel, the PSG coach, proposed the signing of Antoine Griezmann but the club punctured in bone. When the PSG got in touch with the representatives of the Atlético soccer player, they responded by asking for an annual salary of 35 million euros net. The directive of the PSG interprets that this request was a formulismo to indicate to them, of a discreet way, that was not in the market.

Bartering by Dembelé, object of controversy

Given the possibility of negotiating a Neymar barter for a Barça player, Tuchel tells his bosses that his priority is Ousmane Dembelé, followed by Coutinho. The sports management disagrees at this point and points out that they should set their sights on Coutinho, Rakitic and Umtiti, given the inconsistency of Dembelé, which they do not value in more than 60 million euros. The report, which is in the hands of Al-Khelaifi's technical advisors, indicates that Dembelé remains disconnected 70% of the time the matches last and has difficulty interpreting the game. Tuchel objects that under his command the French attacker will overcome his limitations. But in the technical secretariat remember that being coach of Dortmund, Tuchel himself left Dembelé on the bench the most important day of the season, when on April 19, 2017 were played against Monaco the return of the quarterfinals of the Champions

In the probable case that they sit down at the table with Barça, PSG's sports management anticipates three scenarios, from the most at least convenient. First, exchange Neymar for Coutinho and Rakitic; second, exchange it for Coutinho and Umtiti more money; third, exchange it for Coutinho and Dembelé more money. The sources consulted in the PSG assure that Leonardo values ​​Coutinho as an excellent professional capable of performing at an excellent level in an axial position. They indicate that Coutinho has not shone at Barca because he went wrong to the club after a tortuous transfer from Liverpool that made a dent in his introverted nature. It did not help him, they observe, playing in Valverde's 4-4-2 as fourth midfielder.

Forced to build castles in the air, the executives of the offices of Boulogne are discovered every day more in need of selling and more exposed to the initiative of others. They are in the hands of the star to whom they granted all power. As one agent involved said: "If Neymar agrees with Barça, PSG does not draw more than 100 million."

“The next number one in the world? It could be Medvedev “