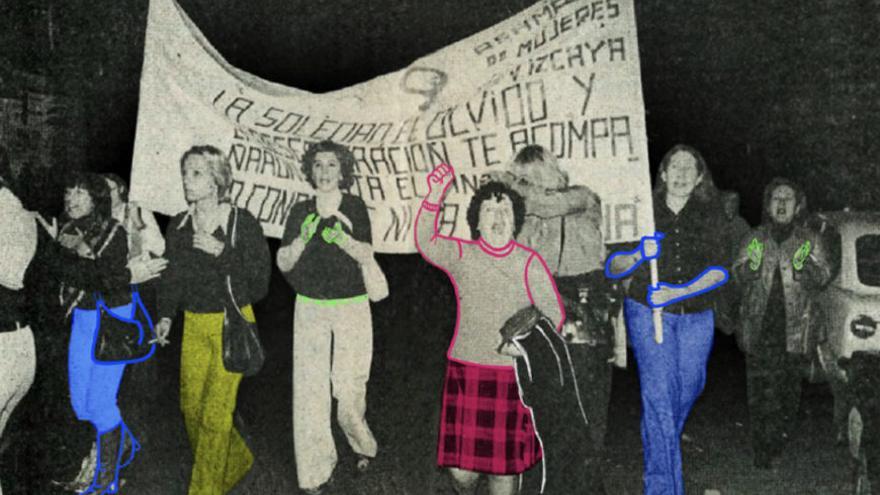 On November 9, 1977, the charred body of María Isabel Gutiérrez Velasco appeared in the Basauri prison (Bizkaia). Two years had passed since Franco had died, but the consequences of the dictatorship were still a very palpable reality. No one ever knew for sure what happened inside his cell, but his death acted as a trigger and lit the fuse for a prostitutes' strike and a wave of protests to demand justice for his partner and an end to the repression that they all suffered. Shortly after attending mass for her death, the prostitutes began to walk in an impromptu demonstration through the San Francisco neighborhood.

Some decades later, the journalist and coordinator of the magazine Pikara Magazine Andrea Momoitio came across the story of María Isabel and the mobilization that had taken place in the streets of what is now her neighborhood. This February 14th she publishes her, by the publisher Libros del KO, lunatic, her first book and an exhaustive investigation that recovers the memory of María Isabel and the prostitutes who worked in Bilbao's Calle Las Cortes. Momoitio has looked for María Isabel in every corner and has followed her footsteps from Bilbao to Asturias, Cantabria or Barcelona. Through official documentation and dozens of testimonies, including those of several family members, he reconstructs a puzzle that is still missing pieces, as often happens with the stories of those who inhabited the margins.

"I have realized that she is not a heroine and I don't want her to look like one; we don't have to be for there to be a place for us. We are in our neighborhood, in the people around us and in the world... whether or not we are heroines", explains the journalist in conversation with elDiario.es. María Isabel, who had a five-year-old son, was a direct victim of the harsh laws and structures of Franco's repression; she was detained many times, she was in and out of jail constantly and was determined to try to survive.

On several occasions throughout her life she was admitted to psychiatric hospitals and spent part of her adolescence in one of the centers of the Patronage for the Protection of Women, a Francoist institution in which girls considered "misguided" were locked up, those who defied El Hierro moral standards imposed on women. The Law of Hazard and Social Rehabilitationthat although already deceased Franco was still in force, persecuted him until his death.

The rule, which replaced the Law of Vagrants and Rogues, punished those who were considered dangerous social, people who, due to their behavior "without being, in general, strictly criminal, entail a risk to the community," reads the text. Among those cited by the law were "the habitual vagrants", those who carried out "acts of homosexuality" or habitually practiced prostitution. But in practice it was used to persecute all those who deviated from the morality and behavioral norms imposed by the Franco regime. Among the measures were the ban on visiting certain places or internment in "re-education" centers.

When María Isabel burned to death in Basauri prison, she was waiting to be transferred to a psychiatric center in Madrid. It is possible that she had some kind of mental health problem, but in the official documentation consulted by the journalist there is no conclusive answer. "She suffered a lot and in the face of that suffering she reacted in ways that are difficult for society as a whole to accept. She became aggressive or screamed when she didn't have to scream according to the canons of the rest," says Momoitio, who delved into the medical files and found contradictory evidence: "I searched until I thought it didn't matter what Francoist psychiatry had to say about her."

The prostitutes of Las Cortes did not believe the official version of María Isabel's death. They went to her funeral in a neighborhood church and half an hour later, between sad and angry, they started a march in which, as published The countrySome 300 prostitutes participated. That night they decided to stand up and not work. According to Momoitio narrates in lunaticOne by one, the bars on Las Cortes street were closed while saying "a colleague has died, no work today." The strike was declared and the clients who at first did not believe it yelled at them: "Here today you don't screw up, stick it in the ground or go with your wives".

They claimed to clarify the death of María Isabel, but she had become a symbol. "Above all, they asked for the repeal of the Law of Dangerousness and Social Rehabilitation, access to education, a center to be able to access medical treatment or an end to police persecution. That night María Isabel burned, but they were all fried, "he says. the journalist One of the prostitutes cried out: "We are the scum of society. If she had been a daddy's daughter, any other woman, this wouldn't have happened to her. But we prostitutes are left to die like dogs."

In the wave of mobilizations that triggered the death of María Isabel they were not alone. At that time, protests were taking place to ask for a general amnesty for social prisoners after the politicians had been amnestied, and the committees in support of COPEL (Coordinator of Prisoners in Struggle) denounced the conditions inside the prisons and the abolition of the Social Dangerousness Law, which would not be completely repealed until 1995.

"The feminist movement was beginning to exist and in fact it was at the protests with a banner that read 'Isabel, loneliness, oblivion and despair accompanied you to the end. You did not even know amnesty' and also the movement sissybut the most active were the committees because the demands of the whores fit directly with theirs, "explains Momoitio. So much so that the next day the women joined a bull run at the Basurto Hospital that the support committees had called days ago to COPEL.

The book recovers the unprecedented mobilization of prostitutes and the hard and short life of María Isabel, who "never found the help she needed", describes the author, although "I trust that she found beautiful people in the places and centers for which He passed". Momoitio has been tracking the woman for several years; almost anyone he has met during this time he has asked if he knew her, if he knew anything about her to keep putting her pieces together.

But lunatic it is, above all, an exercise in memory that sheds light on those who, like María Isabel, were always on the ignored side of history and mattered little to the institutions.