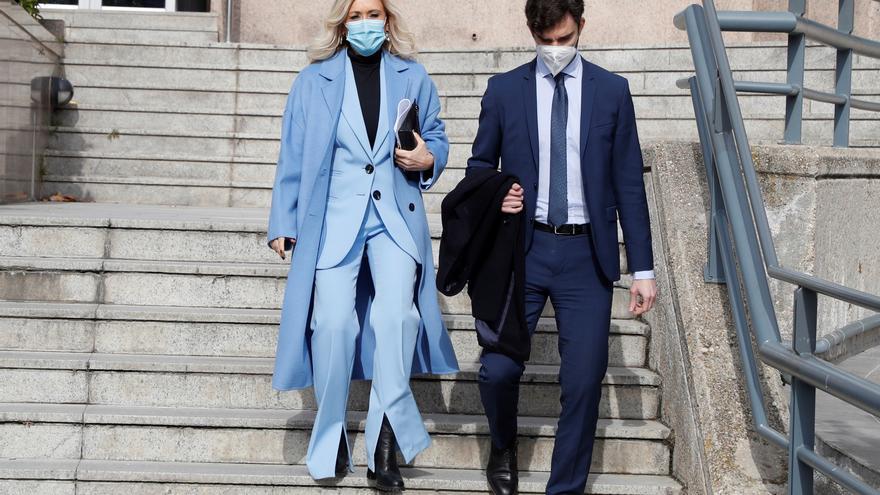 The Prosecutor's Office does not see reasons to reopen the case that Cristina Cifuentes initiated against the journalists who uncovered her false master's degree, Ignacio Escolar and Raquel Ejerique. On January 21, the 29th Court of Instruction in Madrid filed the case for discovery and disclosure of secrets alleging that there were no indications that the information published by elDiario.es had been obtained by illegal means. Cifuentes appealed that decision and the public ministry insists on that line: "It is not possible to attribute the access and filtering of the screenshots to any of those investigated."

The complaint was filed after the first information about the Master's case. The Court admitted it for processing in April 2018. In it, the two journalists, authors of the exclusive, were accused of "illegally obtaining personal academic documents, protected by the Data Protection Law." Cifuentes's lawyers assured in the complaint that the eldiario.es journalists acted "for profit" and that, for all this, they should be sentenced to between two and a half and five years in prison.

"From the investigation procedures carried out for more than two years, insufficient evidence has been revealed in front of any person of commission of the criminal acts charged: unauthorized access to the URJC database, appropriation of protected data of the complainant and transfer of the same to the detriment of a third party, or publication of said data with knowledge of its illicit origin, "said the judge to argue the file.

Now, in the face of Cifuentes' attempt to move forward with the case, the prosecutor Fidel Solera Guijarro reminds him that the URJC's computer system "did not record access to specific data, so there is no information regarding inquiries about records subjects ". He adds in his letter that the University provided a list of up to 400 people authorized to enter that system and make changes.

"It is not possible to know who made the screenshots that were later disclosed" by elDiario.es, argues the Prosecutor's Office because "more than 400 people could have accessed the published content."

The letter says that Professor Salvador Perelló admitted having received some screenshots of Cifuentes' notes in his physical mail from the University, and that he sent the media to investigate them. "Throughout the investigation it has not been possible to prove either that he accessed the URJC intranet to capture the published documents or that the screenshots he forwarded to the journalists were the same as those published," the letter clarifies.

The Prosecutor's Office recalls that both Ignacio Escolar and Raquel Ejerique declared that they could not reveal their sources, that they were unaware of the origin of the documents and that they contrasted the information received, and that it was not proven during the investigation that they had any connection with the rest of the those investigated. Neither did they know the illicit origin of the information, but they did know "its public relevance and the veracity of the published information."

"The uncertainty about obtaining the published documents, due to the requirement of the objective dimension of freedom of information, cannot be resolved by a presumption of illegality and more so taking into account that, in the present case, the data published was strictly indispensable to fulfill the intended purpose of justifying the veracity of the news ", concludes the Prosecutor's Office.

The journalists limited themselves to the "legitimate exercise of the fundamental right to freedom of information" and did not publish any personal information that was not related to the news. Therefore, the Prosecutor's Office asks that Cifuentes' appeal not be addressed and the case be definitively closed.