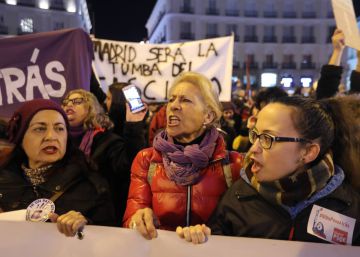 The Prosecutor's Office of the Community of Madrid has proposed a legal reform to force the victims of sexist violence to give a statement in the procedures followed against their aggressors to avoid acquittals due to the woman's decision to accept her right not to testify.

This is a legislative proposal contained in the annual report of the Madrid Prosecutor's Office to introduce a paragraph in article 416.1 of the Criminal Procedure Law in which it is indicated that they cannot avail themselves of the obligation to declare the witnesses who are direct or indirect victims of the criminal act imputed to the accused.

The Public Ministry explains that in its current wording the aforementioned provision dispenses with the obligation to declare "the relatives of the defendant in direct ascending and descending lines, their spouse or person united by de facto relationship analogous to the matrimonial, their consanguineous or uterine brothers and collateral until the second civil grade, "among other relatives.

The article adds in a second paragraph that "the investigating judge will warn the witness that he is" in any of the above situations "that he has no obligation to testify against the accused but that he can make the statements he deems appropriate."

The Prosecutor's Office explains that its proposal for legal reform is due to the fact that the current wording of this article "causes the ineffectiveness of a high number of accusations and, what is undoubtedly more important, the lack of protection of the victim of gender violence."

"Unfortunately, there are many women victims of violence who wish to avail themselves of their right of dispensation both in the instructional phase and in the trial phase, thus hindering the conviction of the aggressors," he emphasizes.

And he points out that "even on many occasions, even if they do not accept the dispensation, they try to give an attenuated version of what happened and even deny the facts even when there are direct witnesses to the crime."

He warns that "in a considerable number of cases of violence against women, the only direct evidence of the criminal act is the testimony of the victim who, if he avails himself of the legal dispensation and does not testify, either in the investigation phase or in the oral trial, will necessarily be dictated acquittal. "

It abounds in that this has "negative consequences of reinforcement in the feeling of impunity of the aggressor and the discouragement of the victim who can assume the sense of inevitability of the situation".

In addition, the report comments that "this system makes the victim witness to the exclusive criminal act fully responsible for the success of the process, specifically to their voluntary option to avail themselves of the legal dispensation and not to declare or otherwise render a statement."

Therefore, the Prosecutor's Office proposes to introduce the following text in article 416.1 of the Criminal Procedure Law: "Witnesses who are direct or indirect victims of the criminal act imputed to the defendant cannot avail themselves of the waiver provided in the two preceding paragraphs."

According to the report, during 2018 a total of 722 women received such dispensation during the investigation phase and of the 1,269 acquittal sentences handed down in 487 of them, the victims decided not to testify.

The Prosecutor's Office regrets that "on many occasions they claim to take advantage of that right because they have common children with the aggressor and so that they are not harmed without making sure that the greatest damage to them is to be living in an environment of violence."

"In the first months of 2019 we attended with concern to a rebound throughout the national territory of the murders of gender-based violence, which once again forces us to rethink the prevention and protection strategies that are currently underway," he concludes. .

What happens if I catch a regrowth away from home and on vacation?