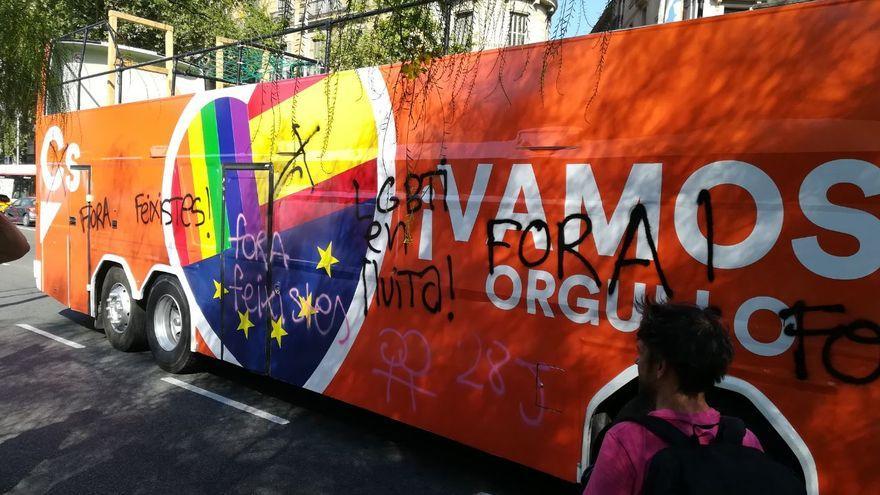 The Prosecutor’s Office has claimed a fine of 540 euros for each of the four LGTBI activists accused of light coercion with ideological motivation in relation to the graffiti perpetrated on the LGTBI bus of Ciudadanos in Barcelona’s Pride last year. In a speedy trial held this Tuesday, the Public Ministry and Citizens, which exercises the private prosecution, have argued that the four activists were part of the thirty people who surrounded the vehicle, painted it with slogans such as “outside fascists” and even arrived to break a lighthouse.

The defendants, who have only responded to their lawyers, have admitted participating in the Barcelona Pride demonstration and in that they prevented the advance of the Citizens’ bus as the formation of the LGTBI commemoration was excluded due to their alliances with Vox in Andalusia or Madrid. The defendants have insisted that they only prevented the vehicle from going to the Pride events, without causing damage to it, reports the Catalan Agency for Notícies (ACN).

On the contrary, Ciudadanos maintains that the young people, in addition to the graffiti, shouted “we will burn your bus”, so that in addition to the coercion, they accuse them of threats and claim a fine of 1,080 euros each and 250 euros in compensation for Non-pecuniary damage for the three militants from the formation who remained inside the vehicle.

The events occurred on June 29 of last year in the Plaza Universidad de Barcelona. About twenty people stopped and painted the Citizens’ LGTBI bus in protest of the pacts of Albert Rivera’s party with Vox, the main reason why the organizers of Pride had already decided to veto the formation of the march. After being painted, the bus left University Square escorted by the security forces.

The defendants’ defenses have alleged that the complaint had been filed by the party’s communication secretary in Barcelona, ​​Jorge Carlos Feijoo, despite not being present at the scene. Feijoo has alleged that he accompanied the three militants who were inside the bus to report the events to the Mossos and that, thanks to the videos they recorded from the inside and others collected from outside, they were able to provide the identity of two of the alleged attackers now tried.

Of the three victims, two men have assured that they were “scared” during the 15 minutes “of tension, violence and nerves” in which the vehicle was blocked in the University Square. They explained that the intention of the match was for the bus to pass through Plaza Catalunya, but that when the traffic was partially cut off they ended up stopped at a red light in Plaza Universidad.

Once in the square, the complainants have continued, dozens of protesters surrounded the vehicle, beat it, made insulting graffiti and insulted them with shouts of “fascist” in addition to throwing “serious threats” that they would “burn” the bus. The driver tried to reverse or swerve in another direction, but the protesters prevented him from doing so until the police escorted the bus from the scene.

One of the complainants has acknowledged that despite the fact that last year the Pride organizers had prohibited the presence of the Citizens’ bus, when they knew the route and schedule of the official demonstration they wanted to pass “very close” to the march without attending it. .

He has also argued that the attack was for ideological reasons. One of the complainants has identified two of the accused, and the other has identified all four as participants in the events. For its part, the defense has asked for acquittal considering that it is Citizens who should not have gone to the area of ​​the demonstration to be vetoed by Pride.