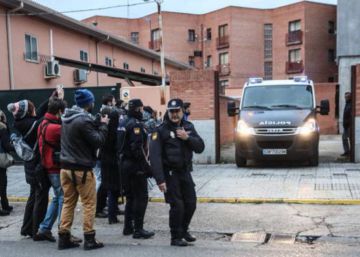 The Prosecutor's Office is asking for penalties ranging from 39 to 40 years in prison for each of the three ex-players of the Arandina Club de Fútbol who are accused of four crimes in the Arandina case. The Public Ministry directs its provisional qualification brief against the defendants Carlos Cuadrado Fought, 24 years old; Víctor Rodríguez Viti, 22, and Raúl Calvo, 19, arrested in 2017 for sexually assaulting a minor in the apartment they shared in Aranda de Duero.

In the letter, the public prosecution considers that the three defendants had telephone and social networking contacts, especially by WhatsApp, since September 2017 with a minor, aged 15, whom they knew before and whose age they knew, in order to convince her to have sex with them. It was on November 24, 2017 when the child went to the home of the three defendants where, after a conversation, was forced to have sexual relations with all of them in the living room of the house, to be subsequently forced by one of them , Raúl Calvo, to suffer another sexual relationship in a bedroom of the house, according to the Prosecutor's Office of Burgos.

The investigations of the case began as a result of a call from the parents of the minor assaulted to the ANAR Foundation, an NGO that attends to minors and adolescents in situations of risk and distress. The girl was in psychological treatment, so she went to Madrid every week with her parents to receive treatment. It was during one of these consultations when the young woman explained that three boys proposed sexual intercourse and they invited her to her apartment in Aranda de Duero. According to the teenager, once there, she did not want to continue with the players' proposal and they forced her, indicated sources close to the case. She affirmed that she submitted to avoid "greater evils". The Arandina dismissed the three players immediately and definitively and He expressed his "maximum condemnation and rejects any act of sexual violence." The defendants were sent to prison two days after their arrest and remained there for three months until they were released on bail and with charges, in March 2018.

For the public prosecutor, the facts constitute a crime against the sexual freedom, a continuous crime of sexual aggression to minors of 16 years and other two crimes of sexual aggression. It establishes that the three defendants are alleged perpetrators of an offense against sexual freedom, while of the ongoing offense under 16 years, they accuse Raúl Calvo as the perpetrator and the other two accused as necessary cooperators, in relation to the crime committed in the bedroom of the house From one of the crimes of sexual assault to a minor of 16 years, Carlos Cuadrado is considered the author and necessary collaborators to the other two young people, while the other offense with the same classification establishes Víctor Rodríguez as the author and the other two as necessary cooperators.

For Calvo, the Prosecutor's Office demands a total of 40 years in prison, of which one corresponds to the crime against sexual freedom, 15 to the crime continued under 16 years and 12 years to each of the other two crimes of sexual assault. In addition to prison sentences, he demands the prohibition of communicating by any means with the victim and that he approaches it at less than 1,000 meters for 16 years for one of the crimes of sexual assault, while on the other he requests the same bans on communication and approximation, but for a period of 13 years.

The Prosecutor's Office also requests 10 years of probation for each defendant and, as civil liability, asks that the defendants jointly and severally compensate the child, through their parents, at 50,000 euros for the moral damage caused and also requests to impose Raúl Bald payment of compensation of another 20,000 euros to the victim for the moral damage caused. The public accusation also requests that the trial be held behind closed doors for the protection of the children involved in the process.