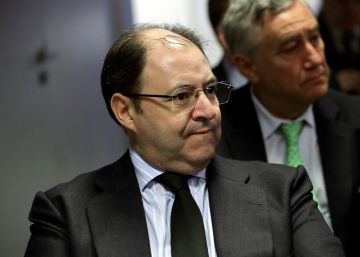 Antonio Béjar, former president of the Castellana Norte District, the company that responsible for the call Operation Chamartín and which is controlled by BBVA, it must not finally present bail in the Villarejo case, where he is charged with other executives and former directors of the entity.

The Anti-Corruption Prosecutor's Office, which on Friday had asked to deposit 500,000 euros In order to avoid prison, he has withdrawn the petition after Béjar explained the contents of the computer material that was allegedly destroyed by his indication for about three hours and provided documentation on the referral to his superiors in September 2018 of the information that your department had about the contracts with the commissioner currently incarcerated, according to legal sources. However, Béjar, which was stopped by BBVA last Friday of his position in the Castellana Norte District and thus became the first victim of the Villarejo case within BBVA, he remains charged. Precisely, the Madrid City Council has given the green light today to the real estate macroperation of this entity, the so-called Operation Chamartín.

The former president of the Castellana Norte District is one of the eight BBVA executives charged in the separate piece of the Villarejo case. Specifically, at number 9, which investigates the allegedly illicit work that the bank commissioned the retired commissioner. Béjar, a director very close to former president Francisco González, was the only one of the eight who, when they were summoned by Judge García-Castelló in early July, did not accept their right not to testify. He did it very briefly and responding only to his lawyer's questions. Then, he denied any irregularity in his performance and stressed that the entity hired the company of Villarejo, Cenyt, between 2010 and 2013 but did so to inquire into the assets of delinquent clients with the entity and to do other intelligence tasks that were also contracted with other companies.

However, last Friday Béjar was summoned again to testify. On this occasion, the interrogation focused largely on the alleged destruction of computer equipment – two hard drives and 19CDs – which he allegedly commissioned to conduct a specialized company from the company he presided over, District Castellana Norte, in charge of the so-called Operation Chamartín and that is controlled by BBVA and the construction company San José. In that statement, the manager insisted that the commissioner's societies were a provider of the entity and offered to appear on Monday to provide evidence that he had not destroyed any information.

In the appearance, of about three hours, Béjar has explained the content of the destroyed and detailed computer material that in September 2018, when the Villarejo case splashed the BBVA, the financial entity claimed all the departments, including his, all the information they had about the orders to the retired commissioner. According to sources close to the case, this Monday has provided, among other documents, the emails in which he sent to his superiors the documentation that was claimed. After analyzing the data, the Anti-Corruption Prosecutor's Office has withdrawn the request it had made on Friday of 500,000 euros of bail and Béjar has been left without precautionary measures, but remains charged.

The police took a statement a few days ago to the computer technicians of the Castellana Norte District to find out if the material that was destroyed was Antonio Béjar. The destruction of these data had raised the suspicion of the researchers, since, as EL PAÍS advanced, had occurred on June 25, days after the judge claimed documentation from BBVA and a few before Béjar himself declared for the first time. The Castella Norte District then assured, in questions of this newspaper, that the material is unrelated to the case and the financial entity declined to comment.