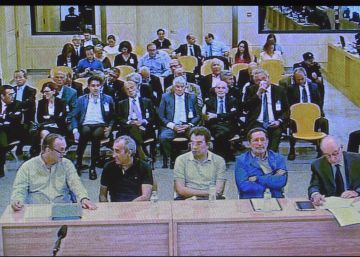 The Anti-Corruption Prosecutor's Office denied on Monday that it has violated the right to defense of the defendants due to the Bank's IPO. At the beginning of the trial, the prosecution surprised by adding the crime of accounting falsehood and expanding the number of people he accuses, which went from four to 15.

In the resumption of the trial this Monday after the summer break, the prosecutor has insisted that the tests carried out in nine months of trial show the "very important" irregularities that accuse them.

The judgment on the Bankia case He was suspended on July 30 following the presentation of final conclusions by the defendants' defenses. And this Monday has resumed with the Prosecutor Carmen Launa's words to present his final report, in which he must state the justification of his accusation, which was extended in the final conclusions phase last July.

After starting the oral trial on November 26, a total of 60 sessions have been held, in which the 34 defendants have declared, including the legal entities Bankia, BFA and Deloitte, 57 witnesses and about twenty experts.

In the new session of the procedure, the prosecutor and the rest of the accusations will proceed to read their final reports. Next will be the turn of the defenses – with possible turn of speech for the accused – and the trial will be seen for sentencing.

"We could have gone further, but we have not done so," prosecutor Carmen Launa sentenced Monday during the presentation of her letter, in which she asks for eight and a half years in prison for the former president of the entity Rodrigo Rato, and between six years and one year of commutable prison for a fine for the other three former managers, former advisers of the audit commissions, the bank controller and the external auditor.

Launa has reiterated that the position of the Public Prosecutor "has remained within the limits of the order to open an oral trial, so the defenses have known at all times what they were accused of and what they had to defend." He has thus referred to the arguments of lawyers such as Rato's or that of the former councilor of the group and former Minister of the Interior, Angel Acebes, who in the process of definitive conclusions denounced the "procedural triquiñuela" by which since last July is attributed to its clients an alleged accounting falsehood that, according to them, was not subject to the trial.

In this regard, the prosecutor recalled that the order issued by the investigating judge Fernando Andreu already opened the door to consider a possible makeup in the accounts of BFA-Bankia of 2010 and 2011, an aspect that was considered by the majority of private accusations and popular people in the cause.

The "transparency" and "scrupulousness" in the process have been such that even a possible modification was noticed in the first session, last November, added Launa, who stressed that after analyzing the documentation and interrogations become evident "the very important insufficiency of the sanitation, the deficiency of information to the market and the disappearance of the generic provision".

It is also evident the image that Bankia wanted to give in its informative brochure to investors, false in the eyes of Anticorruption, which has influenced the role of the entity's auditor, Sergio Durá, of former general risk director Ildefonso Sánchez Barcoj, of that was responsible for the internal audit Miguel Angel Soria and the external auditor Francisco Celma, as necessary collaborators. Once the presentation of the procedural issues is finished, the prosecutor will continue with the assessment of the evidence.