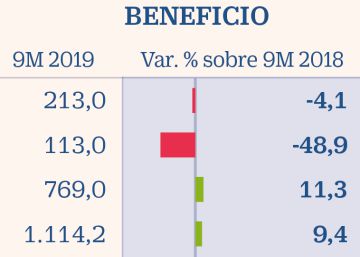 The global political slowdown and uncertainty is also reflected in the results of the Ibex. If, until now, macroeconomic weakness and commercial tensions had been limited to developments in the stock market, the first effects on the income statements are now beginning to be seen. Until September, the net profit of the companies of the large listed companies that had submitted their accounts (their figures are still to be made public Cellnex, Inditex and Merlin Properties) contracted 20.5%, up to 24,276 million. If the results of Cellnex, Inditex and Merlin were included at the end of the semester, the fall would moderate to 19.5%, up to 26,087 million, a more faithful picture of how the final balance of the first nine months of the current fiscal year will be .

The absence of extraordinary positives and the provisions made by large companies such as Telefónica's retirement plan, the provision of 1,500 million from Santander to the United Kingdom or the impact of more than 1,000 million that Endesa suffered due to the closure of the coal plants , they invoice the accounts. The companies that make up the benchmark index of the Spanish Stock Exchange face the fourth quarter with the hope of achieving a small comeback that allows to make up part of the weak behavior of 2019.

The gross operating result (ebitda) of the firms that have submitted their accounts was reduced by 6.7%, to 43,849 million. As with the net benefit, including Merlin, Inditex and Cellnex, the decrease is limited to 4%, to 47,827 million.

At the end of September, only Ferrovial and ArcelorMittal registered red numbers. The company chaired by Rafael del Pino has maintained this trend since at the beginning of the year it incurred losses due to provisions for a service contract in the United Kingdom and several highways in the United States. At the end of September, Ferrovial's losses reached 104 million, compared to the profit of 59 million obtained in the same period of 2018. For its part, the steelmaker registered red numbers of 516 million euros as a result of the extraordinary negative impact of 993 million euros for the measures implemented for the purchase of ArcelorMittal Italia and the deterioration of the value of the fixed assets of ArcelorMittal USA.

With the world economy entering a deceleration phase, the obstacles that companies have to overcome are high. While the net profit and ebitda begin to show signs of weakness, billing manages to withstand the onslaught. Between January and September, the turnover of the Ibex remains stable and advances 1.44%, to 367,267 million euros. With Inditex, Merlin and Cellnex, revenues rose 1.5%, to 380,813 million.

Of the listed companies that have been accountable to investors since October 22 – that day Enagás gave the season the results -, 13 companies recorded falls in their turnover, compared to 19 that managed to increase it.

Although low oil prices made a dent in Repsol's accounts, it maintains the leadership it achieved at the end of 2018 when it managed to establish itself as the non-financial listed company with the highest turnover, surpassing Telefónica after nine years of teleco leadership. At the end of September, the oil company registered a turnover of 36,870 million, 0.61% more than in the same period of 2018. On the heels of it is the company headed by José María Álvarez-Pallete, whose revenues stood at 36,023 million.

Above them is Santander, which with its geographical diversification manages to overcome the low interest rates prevailing in the euro zone, and in the first nine months its revenues (gross margin) amount to 36,902 million. Special mention is that of ArcelorMittal, a foreign company, which at the end of September invoiced 49,720 million euros.