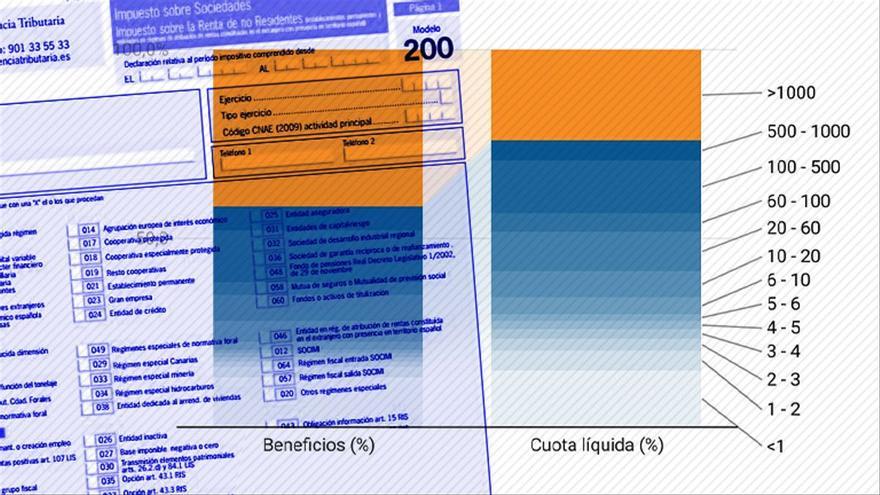 Do companies pay a lot or a little for Corporation Tax? The big companies and the CEOE say a lot. The two souls of the Government, although confronted by fiscal policy, agree that it is not enough. In the absence of two weeks to know the recommendations of the experts for the fiscal reform that the Executive has committed to Brussels, the Corporation Tax appears indicated as one of the problems that Spain has yet to address. The statistics show that it neither collects what it received more than a decade ago nor is it close to the European average, while there are large differences by size.

A few weeks ago, the Ministry of Finance reported a record collection, in the heat of the improvement in the economy, the recovery of company results and the increase in consumption. Last year's final data they stood at 1,200 million above their own forecasts of the Government in the 2021 Budgets. Regarding Companies, the improvement in company profits, after the 2020 losses caused by the pandemic, caused an increase of 68% in income. Despite this notable progress, its weight in total State tax revenue remained at 12%, in line with the years prior to the COVID-19 crisis.

In other words, the Spanish tax system currently has a high dependence on taxes linked to wages (IRPF) and consumption (VAT and special taxes). These three figures accounted for more than 8 out of every 10 euros received by the State in tax matters last year, a reality that has been widely criticized in recent days by United We Can, to defend its tax reform proposal, and by organizations such as the Platform for Tax Justice.

One factor to take into account is that Companies have not always had such a low weight in the tax system. Before the financial crisis, in 2008, almost a quarter of the State's tax revenue was obtained from corporate profit. However, a tax reform that reduced the general rate for Companies caused a drop in collection, while some deductions were maintained and extended. The result can be seen in that 2021 has had the best collection data since 2008 (just over 26,000 million), but far from 2007, when it exceeded 44,000 million. At the same time, both VAT and personal income tax have marked their highest record.

"It does not seem logical that business profits only contribute to the total pie to the extent that they do today," analyzed the Minister of Finance, María Jesús Montero, at the presentation of the General State Budgets last fall. Montero compared this tax with a Gruyere cheese in which the holes are the multiple existing deductions for the companies and blamed the PP and its predecessor in office, Cristóbal Montoro. This criticism has also been made by its partner in the Government, United We Can, who in the voice of Ione Belarra, general secretary of Podemos, pointed out: "What seems inappropriate to me is that in our country, in full economic recovery, workers still and small and medium-sized companies pay double the taxes paid by large companies".

Belarra mentioned the significant gap that exists between large companies and SMEs in terms of their contribution to Corporate Tax. The general effective rate in Spain (in 2019, the latest data disaggregated by the Tax Agency) is 9.09%, compared to a general rate of 25%, which shows the loss of collection due to the various deductions. However, the size of the companies marks a significant gap. The largest, those with a turnover of more than 1,000 million, had an effective rate of 4.7%. Some SMEs, however, more than 20% on average. Another piece of data shows this inequity among Spanish companies. The largest ones contribute 46% of all the profits of companies based in Spain, but do not contribute more than 23% of the total taxes paid.

There is a third aspect that shows that the Corporation tax does not fuel as it should. In the comparison with other European countries, Spain comes out losing. In recent days, Eurostat has updated the website in which it compares the tax revenues of the EU countries with the data for 2020. Spain remains stagnant as the twentieth country by weight of income from Corporate Tax on national GDP . Only in seven European countries is the contribution of this tax lower than in Spain. According to data from the EU statistics agency, in Spain it accounts for just under 2% of GDP, while the community average is above 2.4%.

Despite the fact that all these data show that this tax could contribute more to Spanish tax revenue, the employers maintain that the taxation of companies is already high. "The 'cash rate' figures that are sometimes advertised [elaboradas por la Agencia Tributaria] do not correspond to reality", defended the CEOE in its white paper for fiscal reform in Spain, presented a few weeks ago to mark its position before the document of the experts from the Ministry of Finance. "The fiscal pressure in this concept is very close of the average and the contribution, above the European average", defended the business organization. For this reason, the CEOE argued that it is already an "approval" tax system and was committed to not making major changes, while charging against the type minimum of 15% on the tax base approved in the General Budgets.

It is not the first time that companies have questioned the official statistics that show that the effective rate of large Spanish companies is low. The justification they point to for this is that it does not take into account the taxes paid abroad. Although the data itself Tax Agency of the report 'Country by country' show that the effective rates can also be really low outside. In fact, it was confirmed how Spanish companies used countries such as Luxembourg or Malta, with low taxation, to pay less than 3% for their foreign business.

Like the CEOE, Podemos has also presented a document with its tax reform proposals. In it, the formation directed by Ione Belarra advocated raising taxation, eliminating deductions, limiting bonuses such as those related to the repatriation of dividends or putting a temporary limit to be able to benefit from tax credits. That is, the use of past losses to lower the final tax bill. The Minister of Finance also focused on deductions and bonuses to explain why the Corporation Tax yields so little, although she has avoided proposing specific measures until knowing the result of the report of the experts for the tax reform.

In fact, despite the coincidences, this tax reform has opened a new gap in the coalition government. The tax reform proposal of Podemos was branded by Montero as "inopportune", something that did not sit well with the party led by Belarra. In fact, the confederal group of United We Can has registered a motion with its fiscal proposals in Congress that will force its government partners to position themselves this week. At all times, the socialist wing of the Executive has referred to the conclusions drawn from the experts' report, although Corporate Tax has been pointed out as one of the matters to be addressed, along with property taxation and environmental taxes .