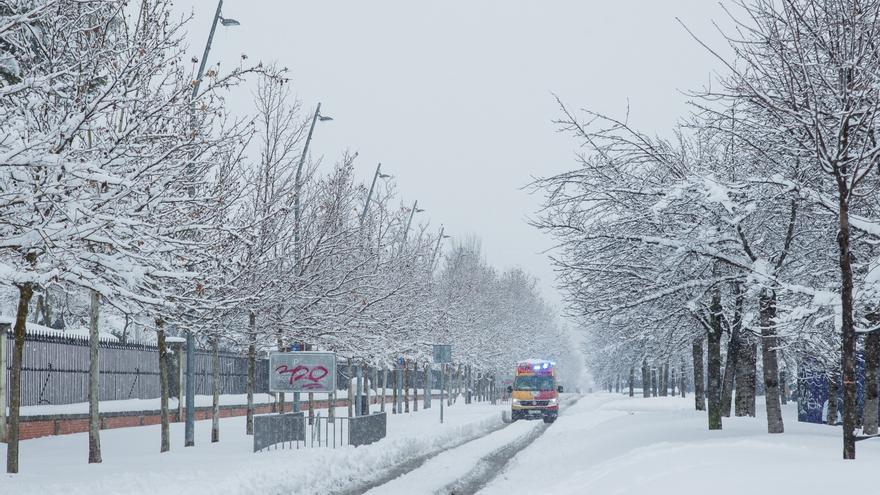 This week it will snow in different parts of the Peninsula, but it is very unlikely that the situation will come to resemble the one that occurred with the storm Filomena. However, after what happened last January around Christmas, it seems impossible not to compare that storm with the next snow that is coming. Experts say that it is normal to compare what is already known with what is to come, but they consider that the magnitude, for the moment, is not comparable.

Could there be a storm like Filomena in November? Yes, scientists say, but it would not be the usual thing. “It depends on the conditions that occur, but in this case, seeing how it is forming and the amount of precipitation that is expected, it is not the most likely,” says Daniel Santos, a meteorologist at the Danish Meteorological Center and a researcher at the University. Complutense of Madrid.

“After doing climatic studies it has been seen that, more or less, the return period [frecuencia con la que se presenta un evento] It is 100 years old, so the probability of having a new Filomena is 1%. You can pass? Yes, but the probability is very low “, calculates Santos from the Sierra de Madrid, where the first snowflakes began to fall this Monday. The fact that it is November is not yet the important thing, what must be taken into account is” the configuration atmospheric “.

According to the latest information from AEMET, the snow level has dropped this Monday to 800 and 1,000 meters in the northwest of the Iberian Peninsula. The most affected areas will be the Cantabrian Mountains, the Central System and the Iberian System. For Tuesday and Wednesday the storm is expected to move eastward, so the snowfall will also affect the Pyrenees and some mountain areas in the southeast of the peninsula. It is not ruled out that it may snow in some parts of the Plateau, but alternating with episodes of rain.

“The appearance of a new storm like Filomena is never ruled out,” says Jacob Petrus, geographer, climatologist and science popularizer. Petrus also recalls that the great snowfall of last January had an “extraordinary character, as well as the cold wave that accompanied it”, which caused the ice to persist in the streets of many cities for weeks. “At the moment, it is an irruption of cold air of polar origin, the kind that occur every so often, perhaps a little early for the time,” he acknowledges.

Yes, but its consequences depend on various elements. Not always when a DANA is configured, there is rainfall afterwards, either in the form of water or snow. “A DANA is an isolated depression at high levels, that is, it is defined by a bagging of cold air in the upper layers of the atmosphere. It is a symptom of a lot of instability, although it needs other ingredients [humedad por ejemplo] so that on the surface there is precipitation “, defines Petrus.

Snowfall can be produced by a DANA, but what happened with Filomena was an entry of “very cold air from the north that contrasted with a warmer mass that came from the south and began to generate precipitation,” recalls Santos. “It snowed more in southern areas of Madrid than in northern areas. In the mountains it snowed less than in the center and south,” he adds.

Although a DANA can occur throughout the year, it usually occurs when there is a temperature contrast between north and south because more ripples occur in the jet stream and a DANA is precisely the insulation of one of those ripples . “They do not have a date. Although they are more common at times when there is more undulation,” Santos points out.

On the one hand there is the population and on the other the authorities, the experts differ. People now know that if a heavy snowfall falls, it is best to remove the snow as soon as possible both from the sidewalks and from the balconies and terraces. There is a lesson learned. “I believe that the population in general has a higher level of preparation and I hope that politicians and managers have learned to trust, with some time in advance, the predictions and that they take measures beforehand,” Santos points out. Petrus, in a similar tone, defends the work of meteorologists: “At the level of weather forecasting, last year it was already shown that science is more than prepared to foresee situations of this type. Another thing is to confirm whether the action plans They have changed since last year, and I don’t have much hope that we have learned. “

Searching for Filomena as a reference in each snowfall would be a mistake. “The problem is that when you tell things about meteorology, people look for references,” says Santos. “Referents in near times that can be compared. With the snow, the most immediate thing is to talk about Filomena. To know if it is going to be more or less than Filomena. They are relative comparisons with lived situations.”

Experts recommend being prudent, but above all, following good information as up-to-date as possible. “Let everyone trust when a group of specialists, such as the AEMET, issues warnings. With their margin of error because the atmosphere has a chaotic behavior and it is not possible to be 100% correct”, Santos asks. “There are times when it is better to take a slightly oversized reaction and alleviate the effect than then to complain and say ‘but if it was known and nothing was done'”.

“After Filomena, we are super sensitized with snow, so it shows a lot”, assumes Petrus. It is normal, it caused a lot of property damage and a lot of concerns. It is always better to be cautious, especially in our country, where adverse meteorological phenomena have occurred, and with climate change they do not stop increasing “, ditch.

Comparisons with Filomena are inevitable. The great snow storm paralyzed the capital, one of the most affected areas, for days: it collapsed roads, broke thousands of trees, paralyzed Barajas and even had to suspend classes in some educational centers. Madrid took weeks to remove all the snow and ice, and return to normal.

For its part, the Ministry of Transport, Mobility and Urban Agenda has activated a device of 991 snow plows and 173,195 tons of flux to deal with snowfall in Aragon, Castilla-La Mancha, Castilla y León, La Rioja and Madrid. In addition, it calls for prudence and extreme caution when driving on the road, as well as to check the state of the roads in advance.