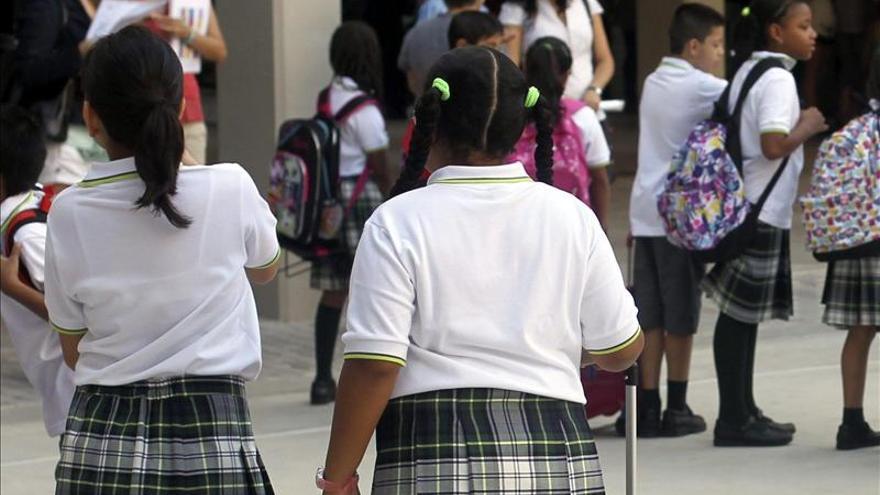 90% of the subsidized schools charge irregular fees to families despite being financed with public funds. In 89% of the cases, these fees are not really voluntary due to the consequences of not paying them, which would contravene the Organic Law of the Right to Education (LODE). These are the two main conclusions of the annual report carried out since 2016 by the employers’ association of private centers Cicae together with the federation of AMPAS associations of the Ceapa public school, presented this Wednesday.

In this case, both organizations, which could be located at one end of the educational spectrum, are joined by a common cause: to denounce the excesses – they say – of the concerted school with the collection of fees. Some because they see unfair competition in a school model that somehow combines the advantages of the private (resources and select students) and the public (theoretical free). Others because they see in the concerted a dysfunction that withdraws resources from the public system and that at the same time can be forced to use depending on where. They also clarify: “There are centers that do not charge anything, we wanted to collect these schools to show the respect we have for those who do educational and social work and do not abuse their status.” The Ministry of Education dedicated a total of 6,342 million euros to concerts in 2018.

“We all know that there are these so-called voluntary quotas, we all know that it is a means of financing subsidized schools. Our objective is to provide data to demand that public funds be used properly and prevent some subsidized schools from being a profitable business” , explained Elena Cid, director of Cicae. María Carmen Morillas, spokesperson for Ceapa, added that “there is no voluntariness, when asked [a los colegios] for the fee they answer that they are the costs of the center. We parents live it with anguish. In schooling, you have to put a list of several centers, you can end up in one of these and when you enroll it turns out that you have to pay fees “.

The price of these “contributions” varies greatly between autonomous communities, according to the report, made from information on 336 subsidized schools throughout Spain (out of a national total of 5,248, according to data from the Ministry of Education) that the consulting firm Garlic B2B, responsible of the same, it considers representative of the total. The report has been made using the mystery shopper technique (people who call posing as a family interested in enrolling their child to obtain information from the center).

Due to the different realities throughout the territory, those responsible have decided not to calculate the average of the quotas at the national level, as Amparo Núnez, from the Garlic B2B consultancy and responsible for the report, explained at a press conference. In Catalonia, Madrid, Euskadi and Navarra are the four communities in which payment is “mandatory” in 100% of cases. They are also, with the exception of Navarra, those with the highest average quotas. Thus, the average reaches maximums in Catalonia, where it amounts to 255 euros per month. A community college, Saint Pauls, also holds the absolute record, and by far, with a fee of 950 euros every 30 days. Madrid follows, where they pay 110.81 euros on average and the highest cost is at the Casvi school, with 209 euros per month. In Euskadi the average is 97.35 euros per month and the Claret Askartza school charges 205.46 euros every 30 days.

Private centers and families denounce that the centers are not transparent with regard to fees: that they tend not to report the voluntary nature of their payment (the opposite is illegal, centers with a concert, as part of the public network because they are financed with state funds have to be free) and when a family refuses to pay, they exclude their children from certain activities.

“There is a lack of transparency and there is great difficulty for families to obtain information and documents that clearly indicate the amount of fees and the concepts [por los que se pagan]”Amparo Núñez, from Garlic, has explained.” After several visits and calls, a high percentage of schools have not provided any written sample, “he adds.” Can anyone imagine hiring a service and not knowing how much they are going to pay for He? “asks Elena Cid, from Cicae. Only 22% of the centers specify the activities they carry out and the concepts that include fees, according to the consultant.

When it comes to justifying these payments, the centers refer to “complementary activities”, explains Núnez. But according to the report, “it is striking that voluntary activities can be considered” elements such as psychomotor workshops, healthy lifestyle habits, reading and graphomotor skills or digital competence. And even less if they occur, as happens, during school hours (the most common time detected is between 12 noon and 3pm). “Complementary activities, originally conceived as specific issues to complement training, have become a complementary hour and within school hours,” says Cid. “What we ask is that they are not recurring and do not occur within school hours.”

The consequences of not paying are condensed in one word, according to the authors of the report: exclusion. And it provides some examples of responses from schools when the possibility of not paying is raised: “You cannot stay to eat, as you will not have surveillance”; “No problem, but the child would come in an hour later, at 10 am, which is when the usual curriculum begins”; “He does not go to classes and it is a shame because that is what differentiates the center. Either he enters an hour later or he leaves earlier, it depends on the day.”