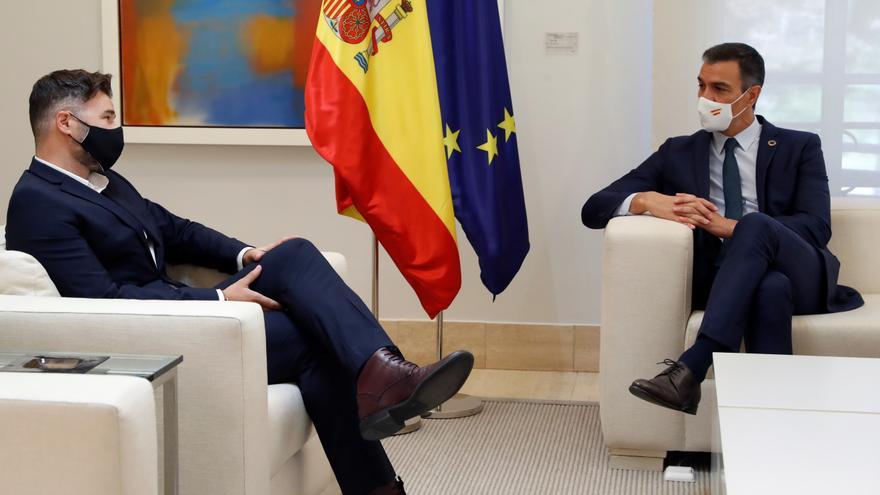 “It seems that everything is accelerating, but everything is the same way: to have Budgets you need to have many open doors.” The phrase is from a socialist deputy who has perfectly read the strategy designed by Moncloa de have several avenues available to carry out public accounts. The Government has Citizens ready to support the budget project in the face of the country’s emergency – and incidentally receive some oxygen for the newly released leadership of Inés Arrimadas – and on the left, to the investiture bloc, to which it has dedicated the last winks , especially to ERC, which has been asking Pedro Sánchez for a solution for the procés prisoners for months. This issue was on the table in the meeting held by the president and Gabriel Rufián at the beginning of September in the round of contact with the groups and also in the meeting with the second vice president, Pablo Iglesias. Now he has sneaked into the middle of the budget negotiation.

The gesture arrived in the control session to the Government this Wednesday: the Minister of Justice, Juan Carlos Campo, explained that next week the procedures will begin to study the pardon of the independence leaders sentenced by the Supreme Court. “We are processing the pardons, by the way, those that concern you so much because they touch you, will begin to be processed next week,” he told JxCat deputy Laura Borràs, who later expressed her “surprise.”

A gesture: the announcement of the obligatory process of pardons

The Government has the obligation to process all requests for clemency that come to it, including those of the pro-independence leaders, which in many cases have been promoted by individuals – a lawyer requested it for the 12 convicted persons, three former presidents of the Parliament. they did for Carmen Forcadell, or for entities, such as UGT, which has requested it for Dolors Bassa–. Despite the fact that the Government denies that it is a nod to the pro-independence forces, it did not have to communicate the beginning of the files and that is where it generates a climate that can pave the way for ERC. “It is an administrative procedure, you have made the gesture of publicly communicating what is normal,” says the same Socialist deputy.

“That the PP be serene because among the obligations of the General Administration of the State and, in this case, the Ministry of Justice is to process all the pardons that are registered. What this Government cannot do is not to process what it is obliged to do. always process, “replied the first vice president, Carmen Calvo, referring to Pablo Casado’s irate announcement that he will appeal that pardon – which in any case has ahead of him a process that Campo has calculated will last about eight months until the Council of Ministers decide to grant it and in which the Supreme Court and Penitentiary Institutions must issue the mandatory reports, although they will not be binding for Sánchez’s decision. Ciudadanos has also announced that it will appeal that decision, although Arrimadas will not leave the negotiating table of the public accounts before the announcement. “We are not going to give him any excuse to make a deal with the independentistas,” says a leader of the formation.

The pardons debate causes controversy within the PSOE –although the internal debate disappeared after Sánchez’s overwhelming victory in the primaries and his subsequent arrival in Moncloa–, but it has defenders, such as Miquel Iceta. “Without a doubt, I would ask for a pardon because in this country we will have to close wounds that have a political origin,” anticipated the PSC leader in the midst of the Catalan campaign in 2017. He reaffirmed himself in that defense, from which the PSOE was then unmarked, and that it cost him 100,000 votes, according to his calculations. At United We Can, they have not hidden their satisfaction with the path that the Government is taking. “After months of work, today the coalition government has announced the reform of the crime of sedition and the processing of insults for the freedom of political prisoners”, celebrated the leader of En Comú Podem in Congress, Jaume Asens.

It is not the only nod to ERC, which the Government once again indicated as a priority partner to carry out the Budgets –without closing the door to Ciudadanos– after the meeting between Sánchez and Rufián. The Government has also taken up in the prelude to the budget negotiation the commitment it acquired at the investiture to reform the Penal Code to lower the penalties for sedition. The Executive argues that it is necessary to “adapt” the classification relating to the crimes of rebellion and sedition to the European legislation before the blow that the Spanish justice took from the German courts that rejected the extradition of Carles Puigdemont. This modification of the criminal legislation, which was included at the last moment in the Government’s regulatory plan for the remainder of 2020, would mean a downward revision of the sentences of Oriol Junqueras and the rest of the jailed leaders.

ERC sees the reform of the Penal Code insufficient

The solution would not be immediate since the process to reform the Penal Code would also have to take a few months: first the draft bill must be approved by the Council of Ministers, then the reports from the Judiciary, the Fiscal Council and the Council of State must be received. , and then plunge into parliamentary processing. One of the options that the Government manages is to speed up the deadlines by proposing the processing by single reading, although government sources maintain that it has not been decided and that there are more options. “The processing of a law can also be done quickly in commission. In addition, the single reading has limits linked to the nature of the project or its simplicity. Therefore, it will depend on the reform of the Penal Code that is finally proposed,” they point out the sources consulted by elDiario.es.

Despite the fact that the socialist leadership believes that negotiations have been flowing with ERC for several weeks, neither of these two approaches has a priori convinced the Catalan Republicans. “Obviously not enough”, Rufián stated bluntly in an interview in elDiario.es.

“We have two proposals: amnesty and referendum. They are proposals that await counterproposals,” pointed out the ERC spokesperson, who is convinced that there will be an intermediate point between his starting point and Sánchez’s. “The positive is that there is already a space. That is why the dialogue and negotiation table between governments is so relevant,” says the ERC spokesman. However, the second meeting of the dialogue table between the Government and the Generalitat still has no date. From Moncloa they assure that they are waiting for Quim Torra to put it on.

At the gates of the Supreme Court ruling on the disqualification of Torra, which is expected in the coming days, the General Council of the Judiciary (CGPJ) has canceled the presence of King Felipe VI at the delivery of the dispatches to the new class of judges who are always presided over by the Head of State. This event is always held in Barcelona, ​​with the exception of last year that took place in Madrid.

The CGPJ already had the invitations with the presence of Felipe VI, as published by El Mundo, and confirmed by the vocal José María Macías in an interview on Cadena Ser in which he assured that they received acceptance of attendance by Casa Real and later, “a communication indicating that His Majesty could not participate in the act.” “The reason given is that he could not do so because the Government did not authorize it,” explained Macías: “His Majesty’s actions, as required by the Constitution, need to be endorsed by the Government; in this case it seems that this has not been the case ”.

Both the Government and Zarzuela hide the reasons why the head of state will not go to Barcelona this Friday, although from Casa Real they slide that it has been a decision of the Government. “All the acts of the Crown must have the constitutional endorsement of the Government. If in the end, due to the circumstances, that endorsement cannot be produced, logically the King must abide and abide by that fact. And, of course, We do not enter into causes or motivations because it does not correspond to us, as is natural “, indicate sources of the institution.

“There are decisions that are very well taken,” said the first vice president, Carmen Calvo, in statements to journalists in which she refused to explain on the basis of what that decision had been made or who made it. “To whom it belongs,” she limited herself to replying. Government sources reject, however, that it is for security reasons: “Security is guaranteed in Spain and also in Catalonia.”