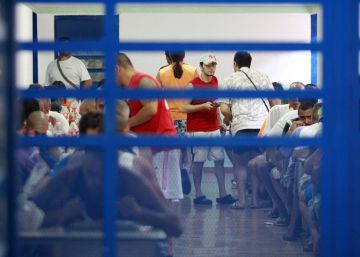 In the United States in 1970, there was an alert about the increase in mental illness among prisoners in prisons. And in the past decade, European studies ratified the alert. The increase was related to the decrease in psychiatric beds that had been observed, attributable in part to the psychiatric reforms initiated in the second half of the twentieth century. The reforms proposed the deployment of services and programs in the community, while the mental institutions were closing. In part it was ensured that community care is more efficient than hospital from a financial approach.

However, in many countries, including Spain, the necessary socio-economic effort in community development has not been made, so that people with long-standing mental illnesses end up excluded from the socio-health care system and exposed to being involved in crimes that lead them to prisons A minority of them are considered not attributable by the courts, so they cannot be convicted and are admitted to prison psychiatric hospitals.

Spanish democracy inherited from the dictatorship some unreasonable things that it did not want or did not know how to change in the Transition, nor later. One of them is the Spanish singularity through which the prison system depends on the Ministry of Interior. In the advanced democracies of our environment, and also in the Latinas that follow the European model, the police bodies are the executing arm of the interior ministries, while the prison systems are part of the executing arm of the Judiciary, in just application of the principle of separation of powers. Its political use against terrorism could have justified the Spanish singularity; but it is time to correct that error in the architecture of the State.

A prisoner said in an Andalusian prison: "when the asylum closed the prisons were filled with crazy" (I told the newspaper.es a year ago). The prisoner had been declared not attributable for his mental illness, but a Provincial Court, in the absence of conventional psychiatric hospitals, ordered his detention in a ward for people with mental illness from a prison as a security measure. An appeal for amparo was brought before the Constitutional Court, which sentenced a year later (2018) as a guarantee that the admission to the psychiatric unit inside the prison was a “hidden prison, lacking absolute legal coverage”.

In order to serve the imputable persons submitted by judicial orders to the psychiatric internment, two penitentiary psychiatric hospitals were enabled under the General Secretariat of Penitentiary Institutions: Fontcalent (Alicante) in 1984 and Seville in 1990. According to an internal report of the Secretariat, in In Seville, all male inmates from Andalusia, the Canary Islands, Extremadura and the autonomous cities of Ceuta and Melilla are admitted; while Fontcalent covers the rest of the national territory for men and the entire national territory for women. The compared statistics show a small number of forensic beds in Spain as a country; But the problem is not only that they are few, but that they are concentrated in only two centers that do not cover the national territory well. How citizens of northwestern Spain can be held in Alicante, their families residing over a thousand kilometers? They are also centers where overcrowding has been reported on numerous occasions. Mercedes Gallizo, being general director of Penitentiary Institutions, talked about "overpopulation", of hundreds of prisoners with mental illness. On the website it was possible to read (2018) that the two centers “have more a hospital nature than a prison”, but this statement is not consistent with the reality of the number of psychiatrists available in each center.

Among the reports issued by the Secretariat, it is worth noting that of 2012. It did not hide the situation and warned of the risks of its organizational and management structure, pointing out the practical difficulties of matching prison regimes with the needs of therapeutic programs. The report's editors also expressed the difficulties in recruiting specialized health personnel, especially psychiatrists, difficulties that attributed to the isolation and organic dependence of the two prisons.

This article has considered the entire Spanish peninsular and extra peninsular territory except Catalonia. The Generalitat received prison powers in 1983 and has developed an autonomous system that does not resemble anything described so far. The Unitat Hospitalització Psiquiátrica Penitenciària armed in Catalonia depends on the Department of Health and has structures, programs and human resources worthy of being taken as a reference. And we are talking about Spain.

Italy had six in 2013 Ospedali Psichiatrici Giudiziari. The Senate called them "vergogna" (shame) and demanded their closure. After a few years of delay, Prime Minister Matteo Renzi initiated the closure of all prison hospitals and promoted his replacement by a network of units called REMS (Security Measures Residence). These units, which today total more than 30, depend exclusively on the Department of Mental Health. They do not have more than 20 beds each and lack cells, are only attended by health personnel and lack police presence. They define them as residential spaces with therapeutic-rehabilitative and social integration objectives.

Germany, Norway, Switzerland or Chile enjoy similar systems; that is to say, of national networks of undoubtedly health centers, specialized in caring for people with mental illness according to their personal needs, including safety, and with rehabilitation and return to the Community objectives. Why is Spain different?

Francisco Torres González He is Professor of Psychiatry at the University of Granada and former Deputy Minister of Health at the Junta de Andalucía.)