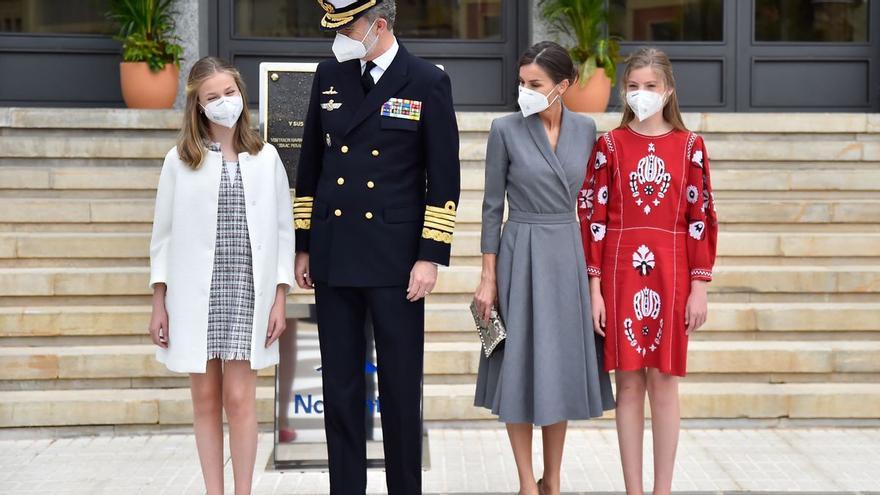 Expectation in the vicinity of Navantia shipyard for the arrival of the Royal Family to the port city for the launching of the S81 submarine, first in the S80 submarine series. At 12:40 p.m., King Felipe VI reached the main esplanade, next to the Queen Letizia, Princess Leonor and Infanta Sofía, who greeted the attendees. They have been received by the Minister of Defense, Margaret Robles; the Government delegate, José Vélez; the president of the Autonomous Community, Fernando López Miras; and the mayor of Cartagena, Ana Belén Castejón. Along with them, the military authorities invited to the event are also waiting.

After his arrival, the Royal Family has made a tour around Navantia during a small visit that lasted only fifteen minutes. The shipyard is celebrating this Thursday with the launching ceremony of the first submarine manufactured entirely in Spain, the S-81 Isaac Peral. Even he has tried to approach residents of the city to try to glimpse the members of the Royal Family upon their arrival at the Port.

The Navy’s music band entertains the wait for the guests at the submarine’s launching ceremony S-81 Isaac Peral.

Among the guests, in addition to the military and civil authorities, is the future endowment of Isaac Peral.

During the event, which started after 1:00 p.m., the president of Navantia spoke first., Ricardo Domínguez, who thanked the Princess of Asturias for agreeing to be the godmother of the S-81 Isaac Peral.

“The road has not been easy,” he acknowledged. The president of Navantia affirms that they have been necessary “Three million hours to build the most advanced conventional submarine in the world”, Indian. “The 80’s is wealth, employment, training and the technology industry,” Domínguez added.

Likewise, AJEMA Antonio Martorell recognized “the effort and dedication of Navantia” so that it can be carried out “This milestone of great significance.”

During her speech, the Minister of Defense, Margarita Robles, wanted to remember the victims of the coronavirus. He has also thanked “Each and every one of the Navantia employees for their work and effort”, as well as the Spanish Navy.

Afterwards, the chaplain blessed the submarine, “so that the crew can overcome the risks of the sea,” he asked God and the Virgin of Carmen. Then the Princess of asturias has cut with His Majesty the King Philip VI the tape of the S-81 that has allowed a bottle of wine to explode against the hull of the submersible.

The ceremony ended with the greeting of the Royal family to the keel crew of the S-81.

A milestone for the Navantia shipyard in Cartagena

The launching of the S-81 is a very “emotional” moment for the team, as he explained a few days ago. Agustín Álvarez, director of the shipyard in Cartagena, since “it has been a real challenge and after many years overcoming difficulties this milestone could take place”, added the head of the company in Cartagena.

With the S-80 program, Navantia had “a dual purpose.” On the one hand, to provide the Spanish Navy with a state-of-the-art ship and “give it a technological advantage” in a difficult environment. And on the other hand, training the national industry in the design and construction of submarines, “something that is available to very few countries in the world and that makes Spain become part of a small club of 10 countries capable of designing and build submarines, “insisted Álvarez.

In this way, Navantia becomes a technical authority in the submarine construction for the first time, as the 70 series is of French design.

Parallel to the construction of the submarines, the Ministry of Defence progresses in the project to equip the 80 series with an air independent propulsion system (AIP).

The first submarine equipped with this technology, which allows a range of three weeks without surfacing, will be the S-83. While the first two ships of the series, which will leave the factory with conventional propulsion, will be installed during their first Great Carena -inspection of equipment and material-, indicate from the Shipyard.

Although Abengoa, the company that won the tender to develop the project, is going through a difficult economic and legal situation at the moment, the shipyard assures that the independent air propulsion program is not in danger, since “It is developed by a subsidiary of the company, Abengoa Innovación, which is not immersed in the problems of the parent company”, affirmed the director of the shipyard in Cartagena.

The cutting-edge technology that the 80 series submersibles will feature has sparked interest from other countries. Right now, Navantia competes with Russia, France, Germany and South Korea to win the Indian Navy contract. In addition, over the last year he has participated in different conferences to publicize the program to other Navies.

The 80 series also has a “novel” combat system that integrates a series of acoustic sensors that put the submersible “at the forefront of submarines in the world,” explained Navantia Engineering Director Germán Romero. It is the only NATO submarine “capable of launching ground attack missiles,” Romero added. It also has the ability to launch torpedoes and launch anti-surface missiles, which makes it “a clear deterrent weapon” and “unique in the world,” says Romero. The 80 series program that Navantia has devised for Defense, It will place the Spanish Navy among the best equipped with submarine weapons in the world.

The incidence falls to 173 cases and Health registers 6,418 new infections

The Veterinary area of ​​the ULPGC, among the five best in Spain